We drove to Bedford so we could visit the John Bunyan Museum.  John Bunyan (Nov 30, 1628 – Aug 31, 1688) was an English writer and Baptist preacher best remembered as the author of the Christian allegory The Pilgrim's Progress. The museum displays mementos from Bunyan's life and writings. 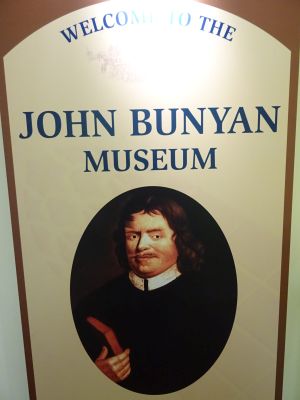 Bunyan came from the village of Elstow, near Bedford. He had some schooling and at the age of sixteen joined the Parliamentary army during the first stage of the English Civil War. After three years in the army he returned to Elstow and took up the trade of tinker (mending pots and pans), which he had learned from his father. He became interested in religion after his marriage, attending first the parish church and then joining the Bedford Meeting, a nonconformist group in Bedford, and becoming a preacher. 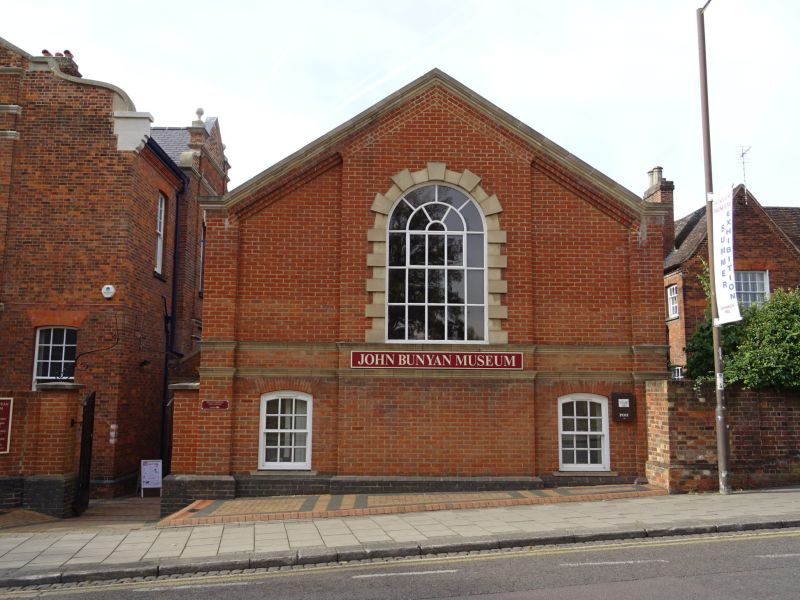 John Bunyan was described in historical documents as tall with reddish hair, prominent nose, a rather large mouth and sparkling eyes.   Suzanna is standing next to a life-size model. 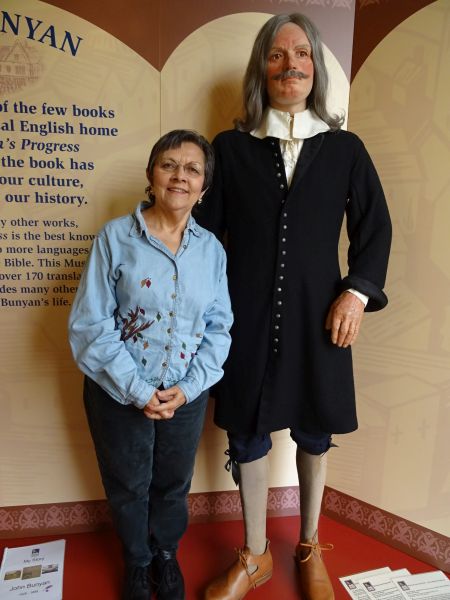 Richard is standing behind a model of John Bunyan writing one of his books. The Pilgrim's Progress became one of the most published books in the English language; 1,300 editions having been printed by 1938, 250 years after the author's death. In addition to The Pilgrim's Progress, Bunyan wrote nearly sixty titles, many of them expanded sermons. 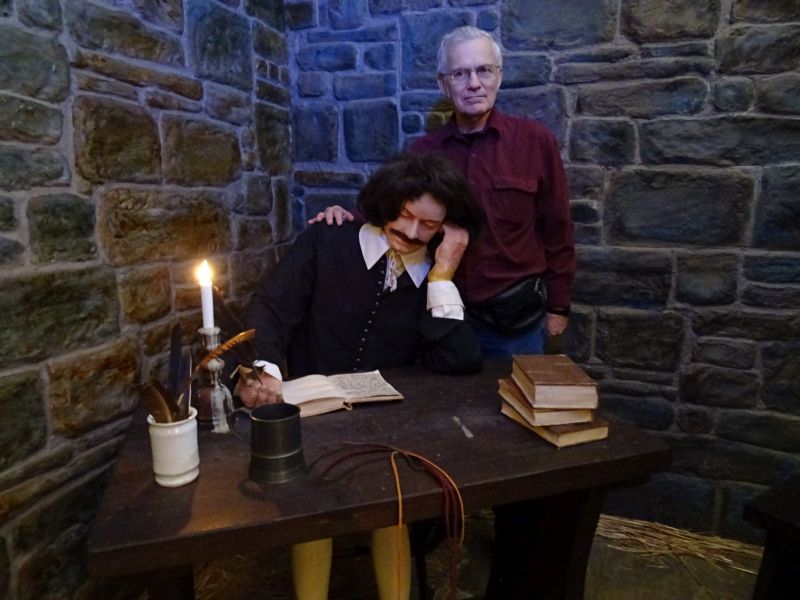 Bunyan Meeting Free Church - In 1672 Bunyan bought a barn in Mill Street to serve as a home for his congregation. The present church dates from 1849. 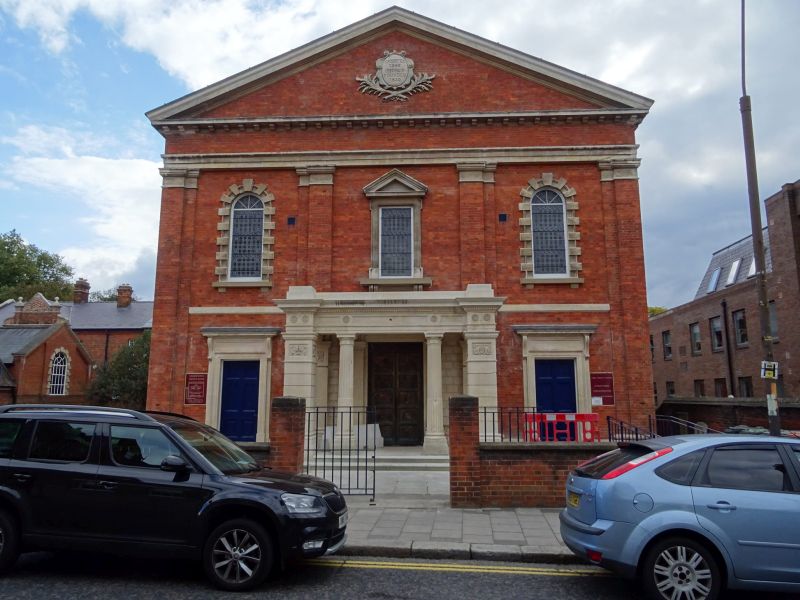 The Bronze doors in the Bunyan Meeting Free Church are depicting scenes from Pilgrim's Progress.  They were donated by Hastings, Duke of Bedford, in 1876. The doors contain ten bas-relief panels, illustrating, like the panels on the base of the Bedford statue, scenes from the Pilgrims Progress. 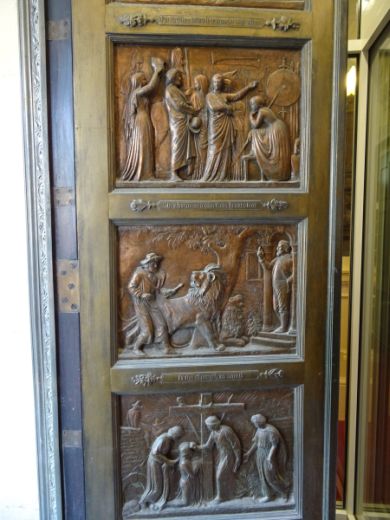 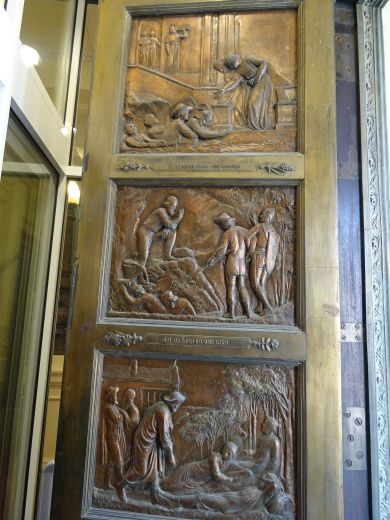 Bunyan lived in a cottage at #17 St. Cuthbert's Street from 1655. The building was demolished in 1838, when his Deed of Gift bequeathing his entire estate to his wife Elizabeth was found hidden behind a brick in the chimney. Apparently Bunyan had feared the authorities might arrest him again and seize his assets. 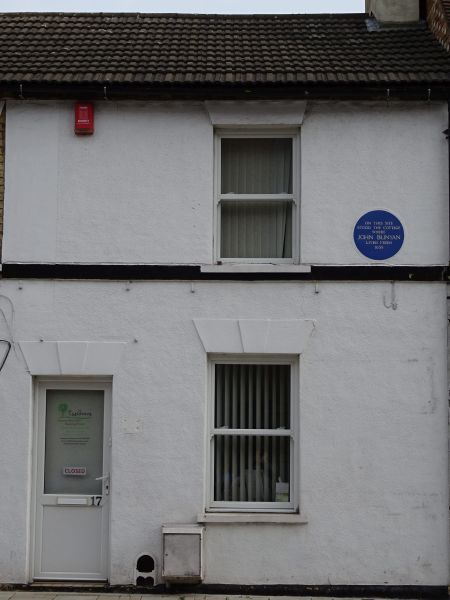 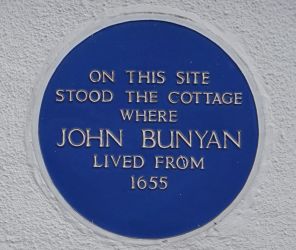 Baptism Pool - It was here in the River Ouse that Bunyan was baptized in 1653 by Rev. John Gifford of the Independent Bedford Gospel Church. 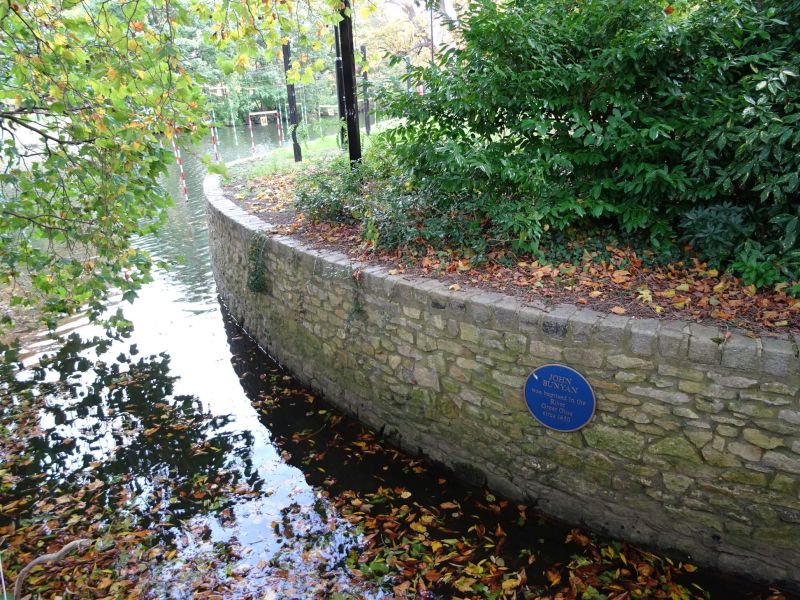 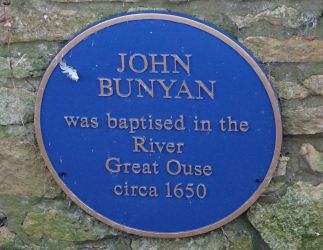 After the restoration of the monarchy, when the freedom of nonconformists was curtailed, Bunyan was arrested and spent the next twelve years in jail as he refused to give up preaching. 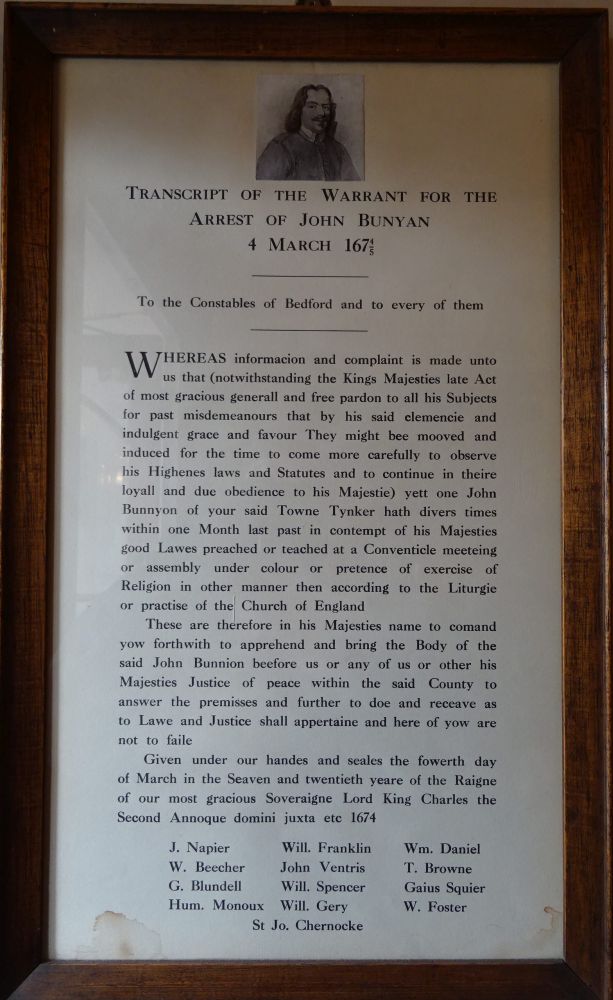 During John Bunyan’s time in prison he wrote a spiritual autobiography, Grace Abounding to the Chief of Sinners.  Bunyan was 32 when he was taken to the County Gaol (jail).   The prison was only five minutes' walk from his home so food was brought into his cell, often by his blind daughter Mary, and a stoneware jug believed to have been used for this purpose is kept at the Museum.  During imprisonment he supported his family by making "long-tagged bootlaces" which they could sell. 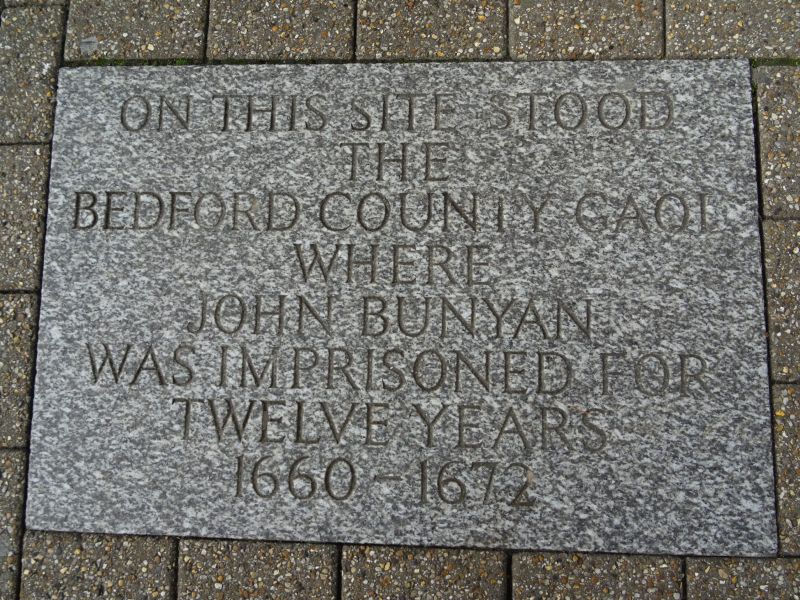 Bunyan may have served his second sentence (1676) in the town gaol (jail) for preaching publicly without a license. The actual jail was incorporated in the bridge structure over River Ouse.  While imprisoned, he began work on his most famous book, The Pilgrim's Progress, which was not published until some years after his release.  Bunyan's later years, following his second imprisonment, were spent in relative comfort as a popular author and preacher, and pastor of the Bedford Meeting. He died at age 59 after falling ill on a journey to London and is buried in Bunhill Fields. 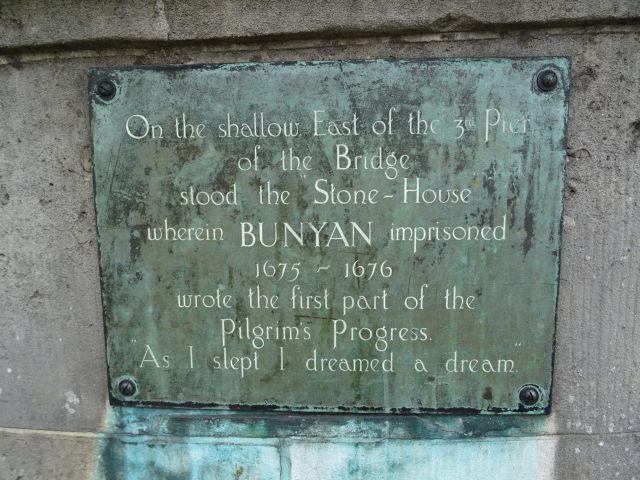 John Gifford was a one-time royalist major and drunkard before his conversion to Christianity.  He became the first minister of the Independent Church in Bedford.  John Bunyan came to him for spiritual advisement when he was starting his Christian walk.  In “Pilgrim’s Progress”, it is believed that John Gifford was Bunyan’s inspiration for “The Evangelist”. 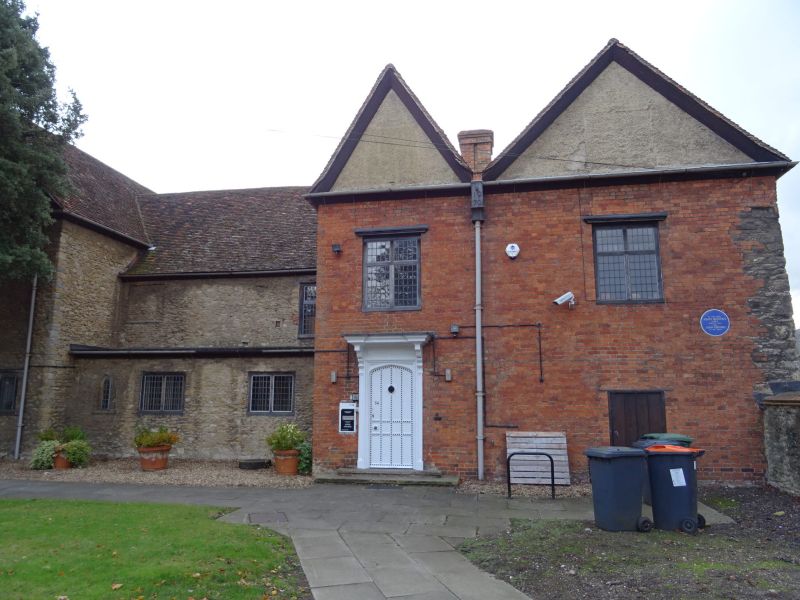 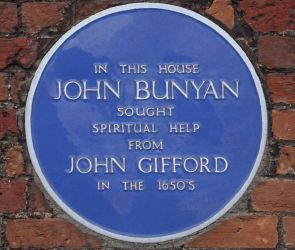 St Paul's Church was originally founded in AD 796 by King Offa to serve the inhabitants of his new fortified urban burgh. The church is mentioned by name in the Domesday book, indicating that St Paul’s was an important church from at least the tenth century onwards.  In the invasions by the Danes in 1009-10 AD the church was destroyed in the fighting. The church was soon rebuilt, but the second building was destroyed, or seriously damaged, in 1153 during a civil war between King Stephen and Prince Henry, who  became King Henry II.  The third church was also destroyed in the famous siege of 1224.  The fourth church was rebuilt in the 1230s using re-cycled stones.  Most of the present church was built or rebuilt in the fifteenth century, followed by a lengthy program of restoration and enlargement in the 1830s. . 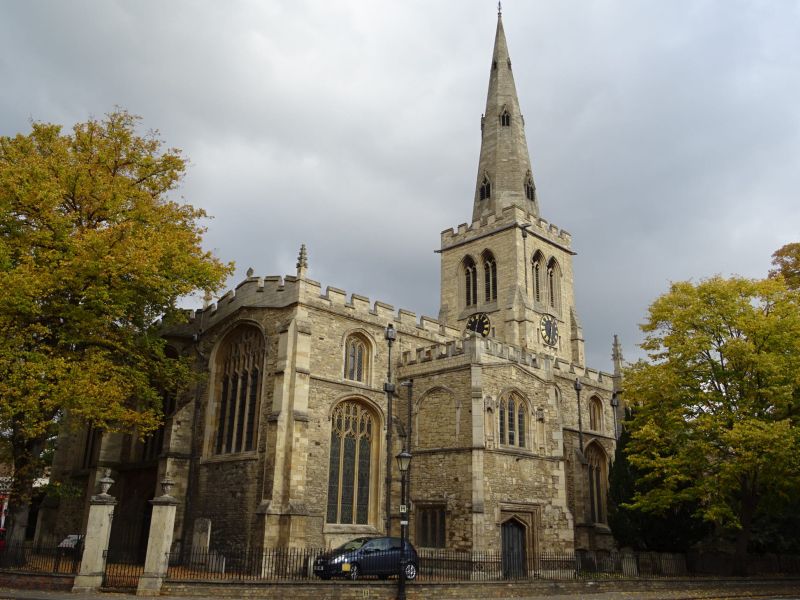 From this pulpit in St Paul’s Church, John Wesley preached the ”Assize sermon” on March 10, 1758. 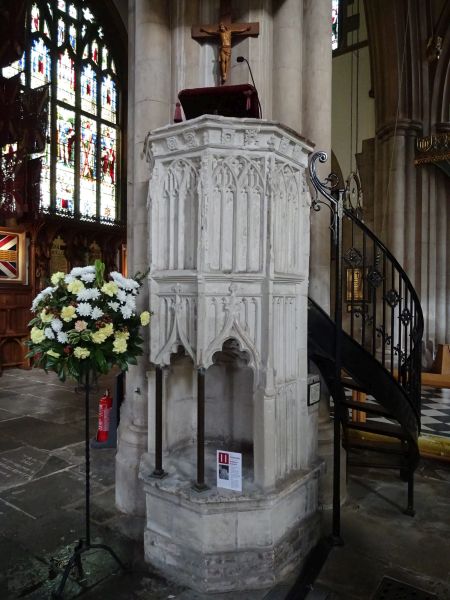