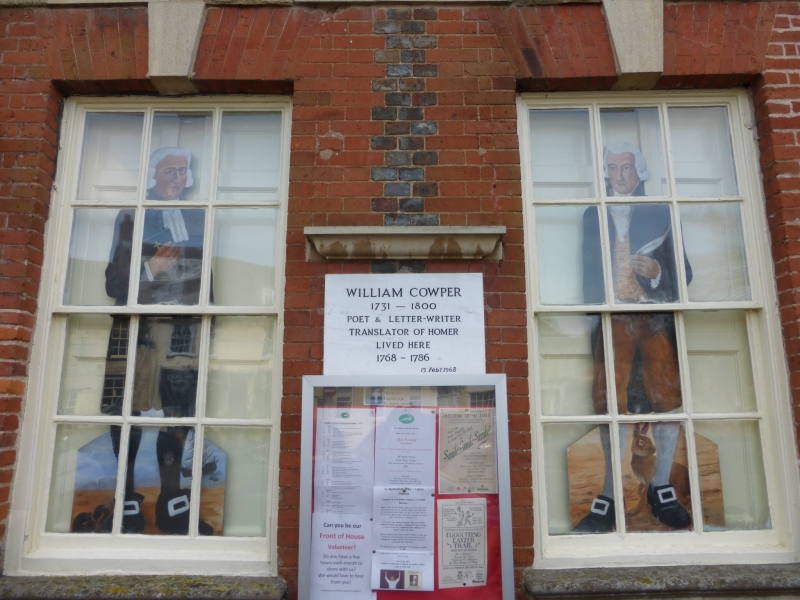 The Parish Church of St Peter and St Paul is where slave trader turned abolitionist John Newton – author of the hymn Amazing Grace – served as curate. 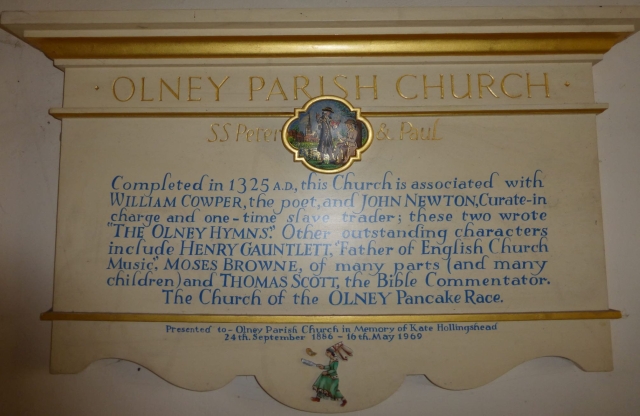 The Parish Church of St Peter and St Paul is also the grave site of John Newton. 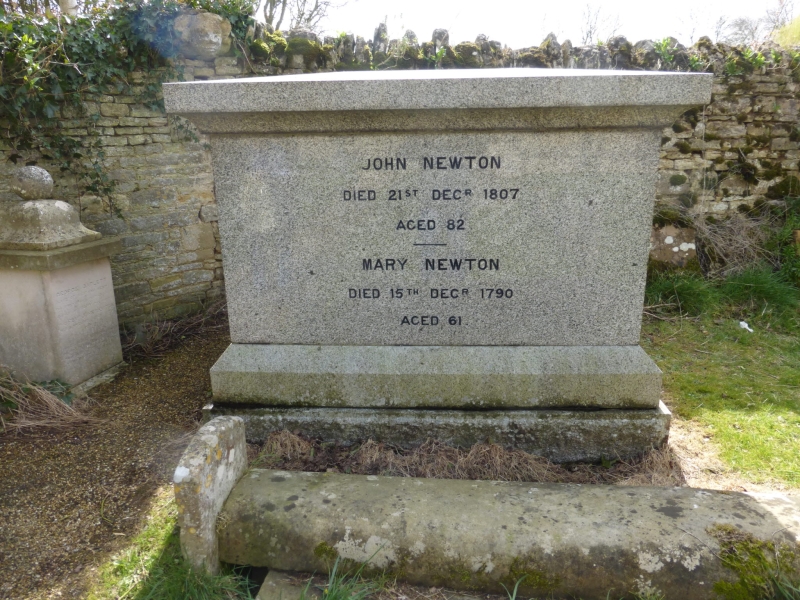 Stained glass windows in the Parish Church of St Peter and St Paul commemorate John Newton’s conversion during a storm at sea. 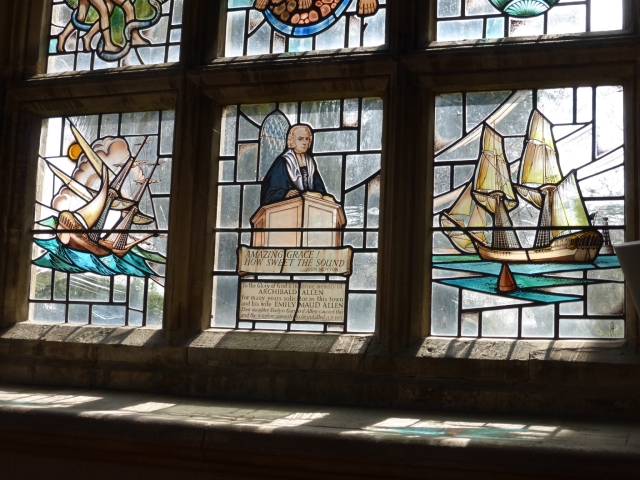 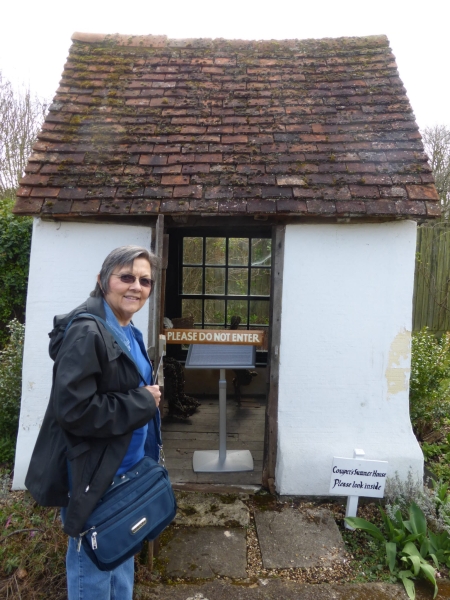 He contributed to Olney Hymns, compiled by John Newton.  His writings include:
GOD moves in a mysterious way,
His wonders to perform;
He plants his footsteps in the sea,
And rides upon the storm.
"Light Shining out of Darkness", Olney Hymns, 1779

There is a fountain fill'd with blood
Drawn from Emmanuel's veins;
And sinners, plung'd beneath that flood,
Lose all their guilty stains.
"Praise for the Fountain Opened", Olney Hymns, 1779

Cowper Memorial United Reformed Church was named after one of the deacons read a brief history of the church from 1662. 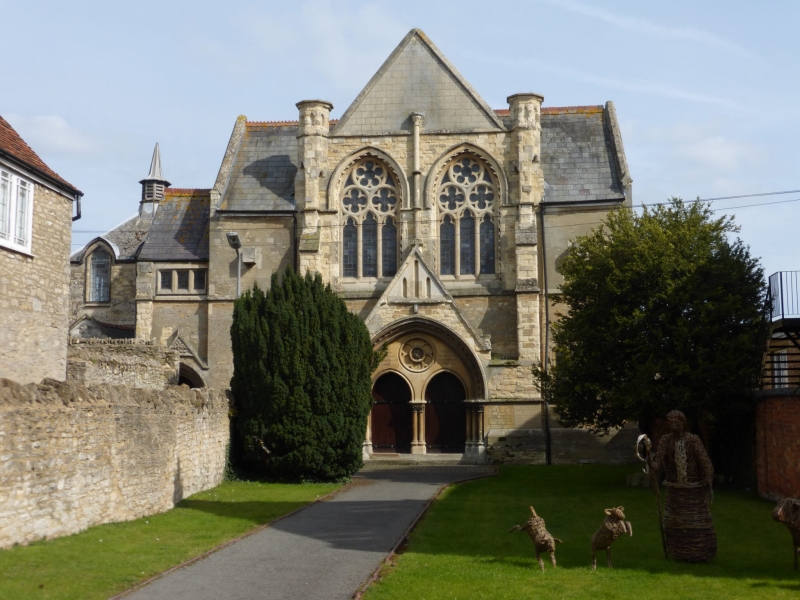 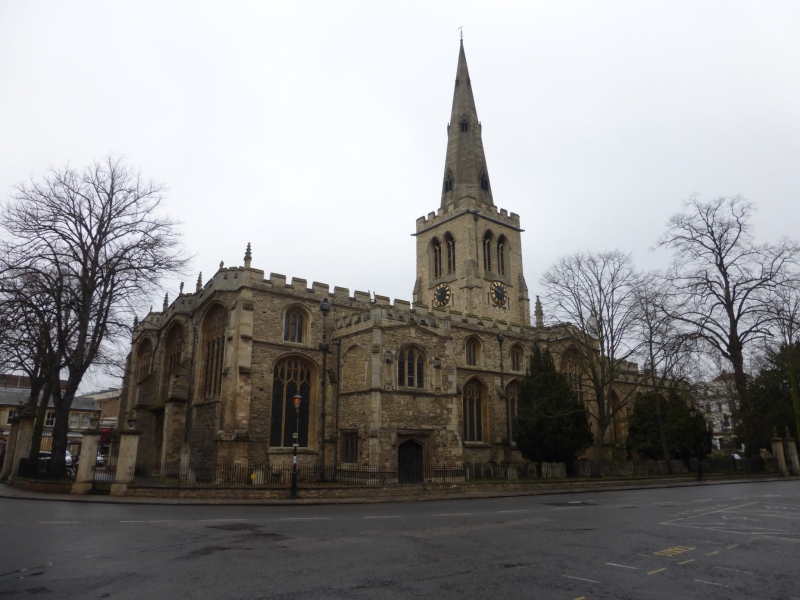 On May 23, 1656, John Bunyan, the Christian preacher and author of "The Pilgrim's Progress", preached at St. Paul's. John Wesley, the Anglican cleric and Christian theologian (also one of the founders of Methodism) preached the Assize Sermon at the church on 10 March 1758.

Bunyan’s Meeting Free Church, Bedford  We were there on a bank holiday, so the Bunyan museum next door was closed. 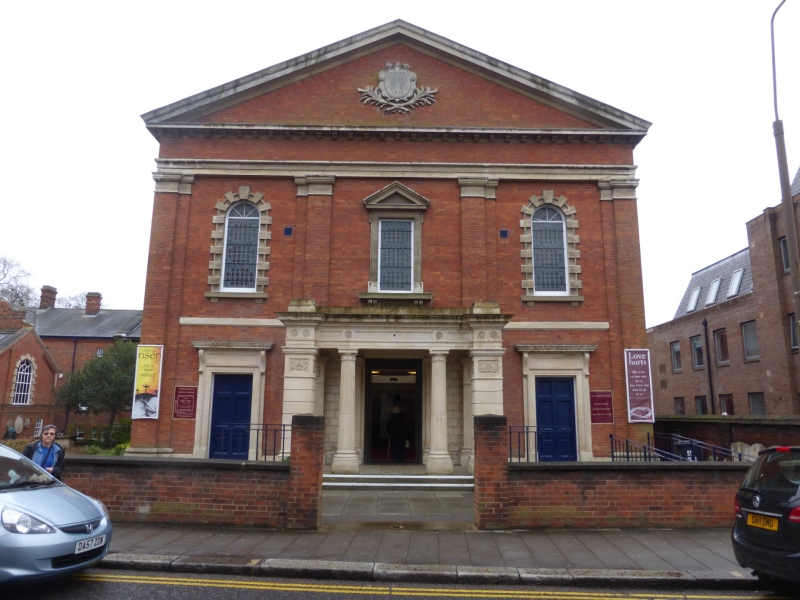 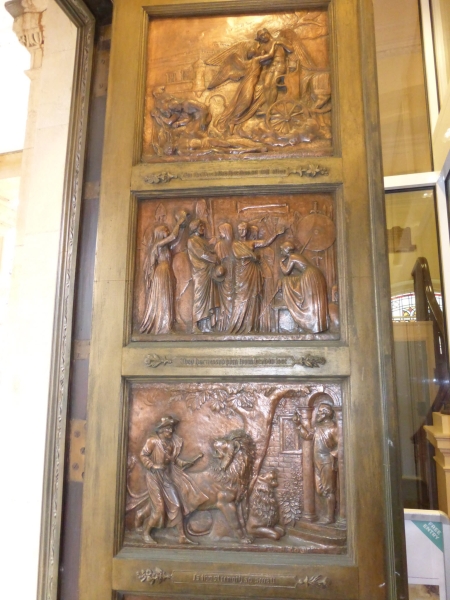 The city of Bedford remembers the location where John Bunyan, author of “The Pilgrim’s Progress”, was imprisoned for 12 years. 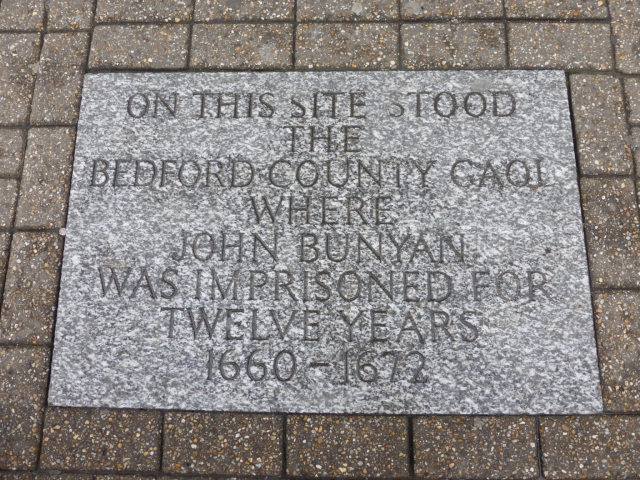 Saxon Tower of St. Michael at the North Gate (1040 AD) is the oldest building in Oxford.  John Wesley preached the Michaelmas sermon here in 1726, as a newly elected Fellow of Lincoln College. 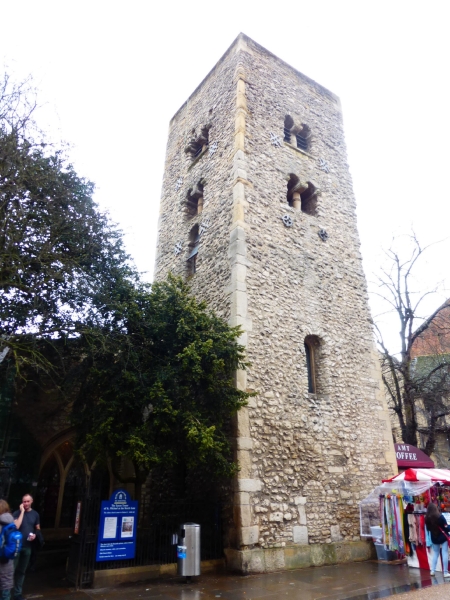 The Martyrs' Cross is brick cross in the street near Balliol College, Oxford, England. 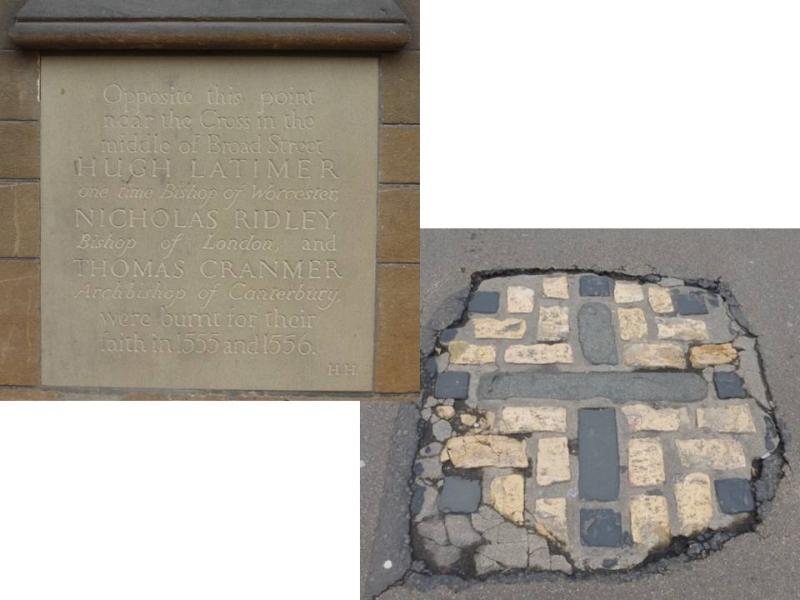 It commemorates the 16th-century "Oxford Martyrs".  Bishops Latimer, Ridley and Cranmer were imprisoned in the nearby Bocardo prison prior to being burned at the stake. While in prison they were visited by members of the Holy Club, including John and Charles Wesley and George Whitefield.  Latimer's final words, recorded in Foxe’s Book of Martyrs, mark a watershed in English history: "Be of good comfort, Master Ridley, and play the man. We shall this day light a candle, by God's grace, in England, as I trust never shall be put out". 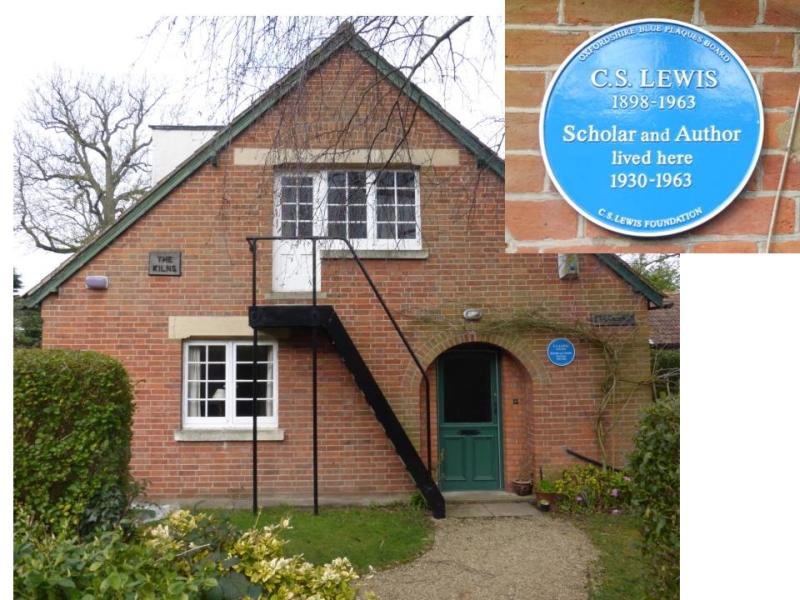 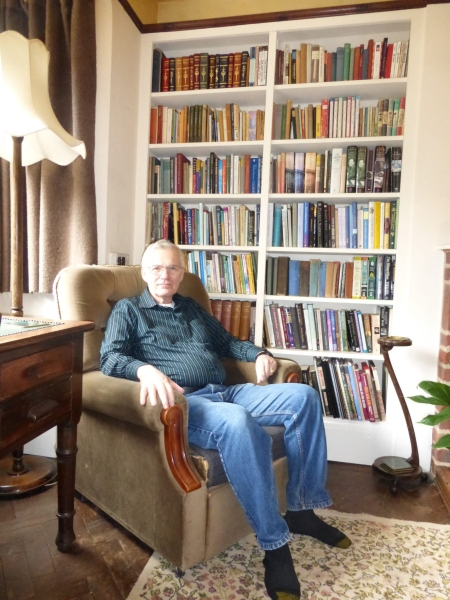 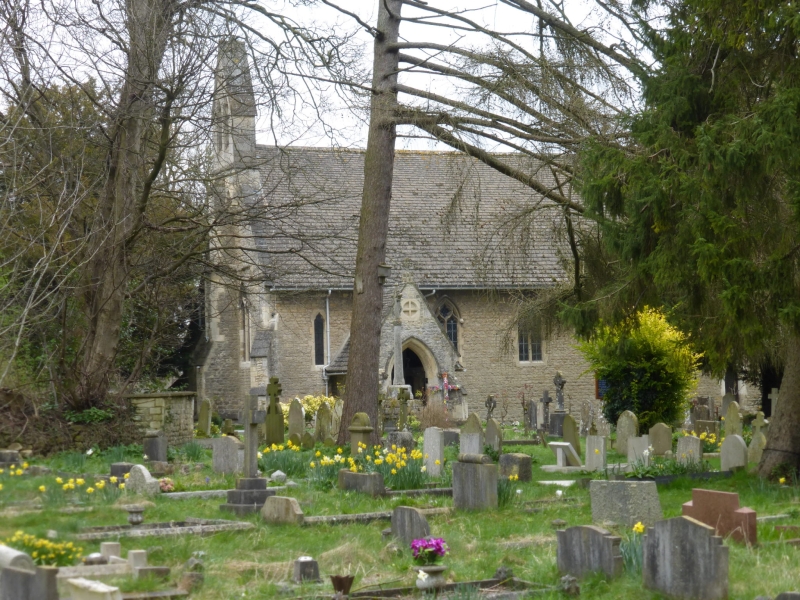 C. S.  Lewis and his brother Warren are buried at Holy Trinity Church 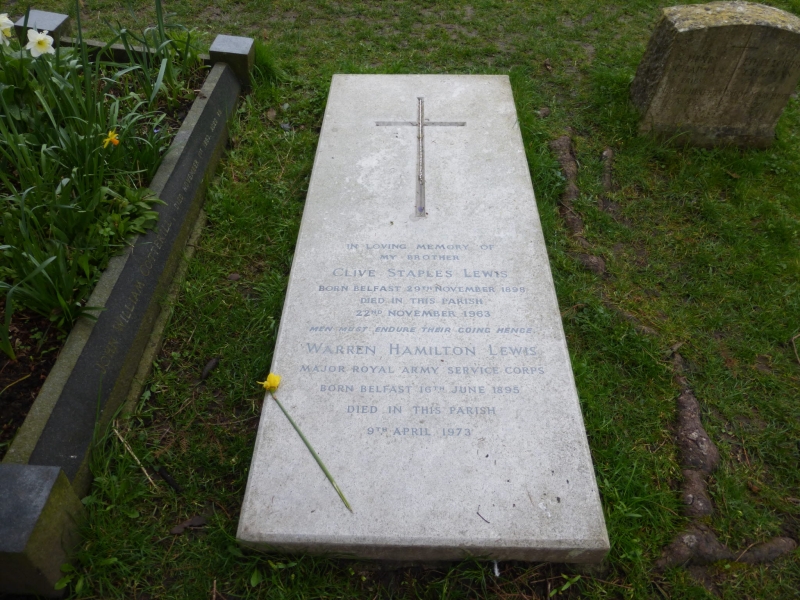 Pub sign on display in home of C.S. Lewis. 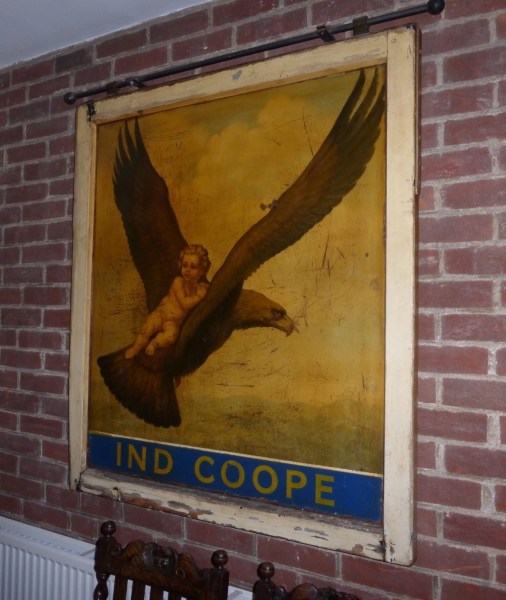 For more than twenty years, C.S.Lewis would meet weekly with his literary friends at the Eagle and Child pub on the west side of the street. Calling themselves "The Inklings", the group, which included J.R.R.Tolkien and Charles Williams, would discuss their intellectual pursuits and read aloud their latest creations. The fruits of their efforts, in which moral themes are woven around a narrative of myth and fantasy, continue to fascinate a new generation of readers and cinema audiences.

C. S. Lewis came to Magdalen College as a student after the First World War and remained for almost his whole career as lecturer, Fellow and finally Professor of English and Renaissance Literature. He had rooms in the New Building - new that is in 1733! 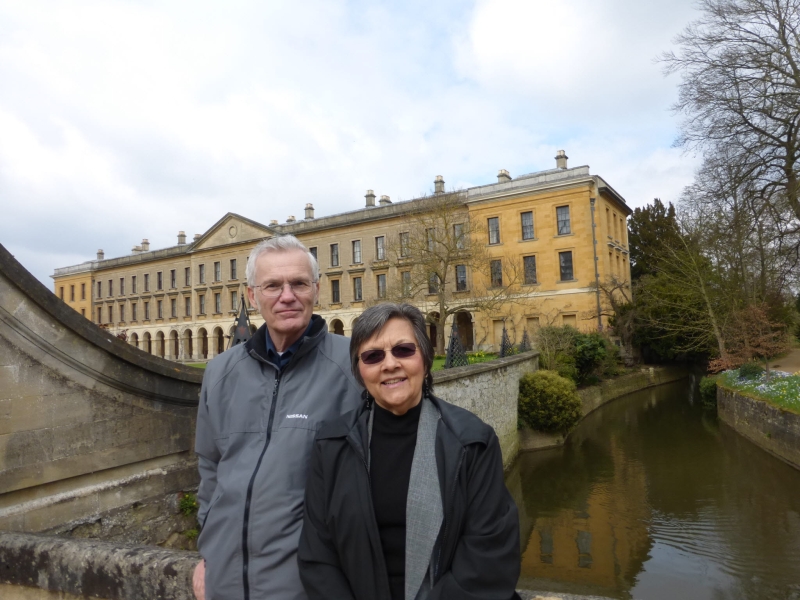 In the 18th century, Lincoln College became the cradle of Methodism when John Wesley, a fellow there from 1726, held religious meetings with his brother Charles and the rest of Wesley's 'Holy Club', whom the rest of the university took to calling 'Bible-moths'. His appearances at College became less frequent after he departed for Georgia as a missionary chaplain in 1735.  John Wesley's Fellowship provided him with an income of £28 a year, on which he lived for much of his life. 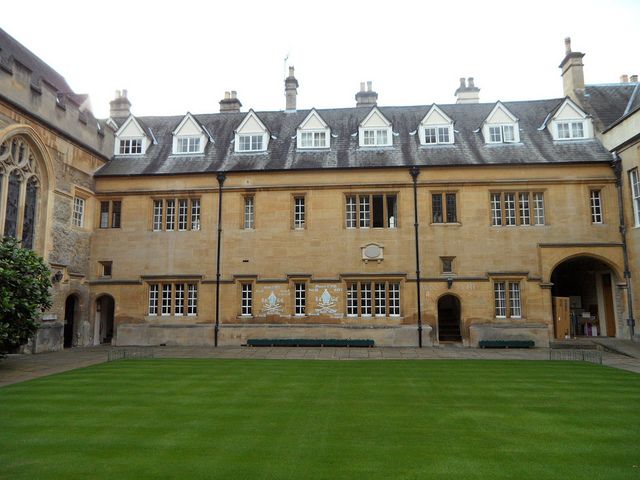 Oxford University Church of St Mary the Virgin was where in 1556 the trial of Thomas Cranmer took place, where he foreswore his former recantations and declared that he would thrust his right hand into the flames for its offence of having signed them. John Wesley preached here on several occasions, including a sermon on Salvation by Faith, shortly after his conversion in 1738. In 1744 he preached again, condemning the university for its slothfulness. His diary records "I preached, I suppose, the last time at St Mary's. Be it so. I am now cleared of the blood of these men". However, the Vice-Chancellor sent for his notes, and he felt reassured that his word would not go unheeded. 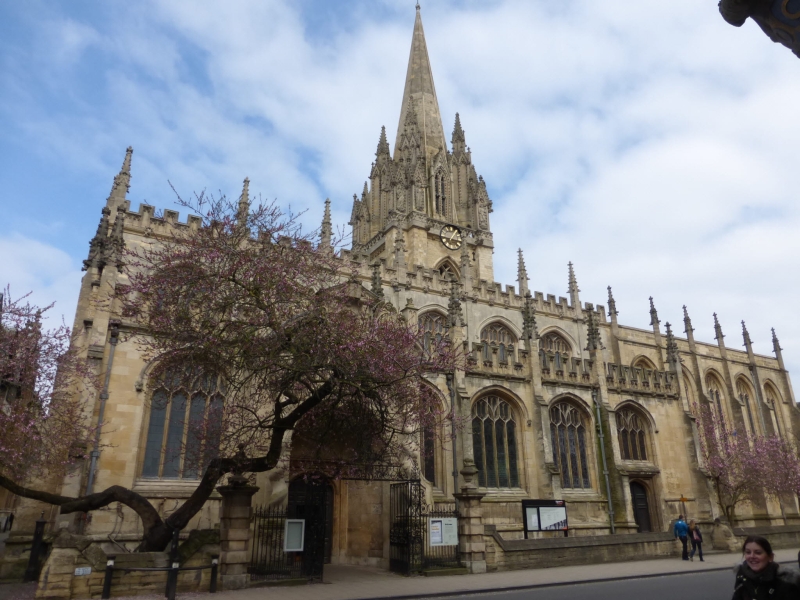 From 1828 to 1843, the vicar of St. Mary’s was John Henry Newman, renowned for his intellect, eloquence and gentleness. When the Oxford Movement began, Newman (author of “Lead Kindly Light”) moved  toward Roman Catholicism, where he eventually became a cardinal.  C.S.Lewis, spoke here on at least two occasions in the early years of the Second World War. His large congregations were looking for comfort and reassurance as they sought to apply their faith to a world in turmoil. 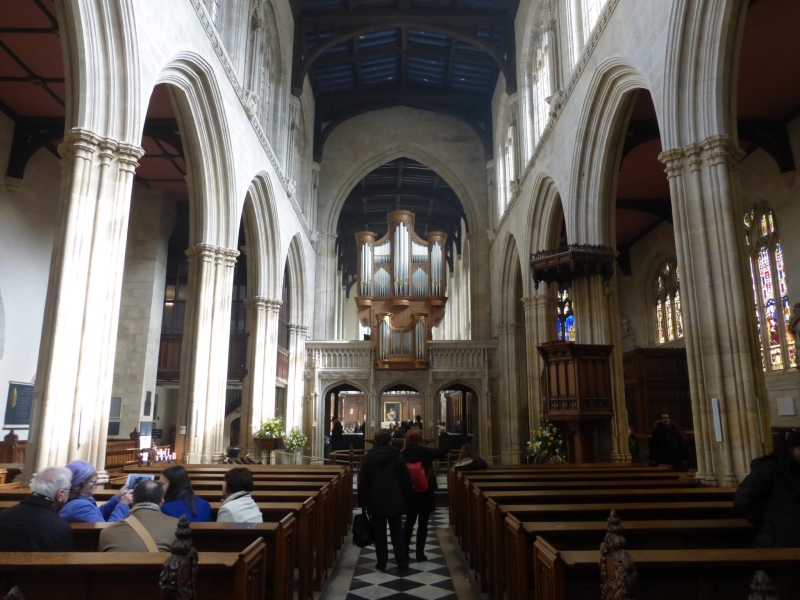 John Wycliffe  (1324-1384) attended Oxford’s Queen’s College and was a Master of Balliol College.  He described Oxford as a "Vineyard of the Lord". A century and a half later, the intellectual whirlwind unleashed by his teachings reached a tragic climax with the trial and burning of the leading reformer bishops Hugh Latimer, Nicholas Ridley and Thomas Cranmer under the auspices of the Catholic Queen Mary. 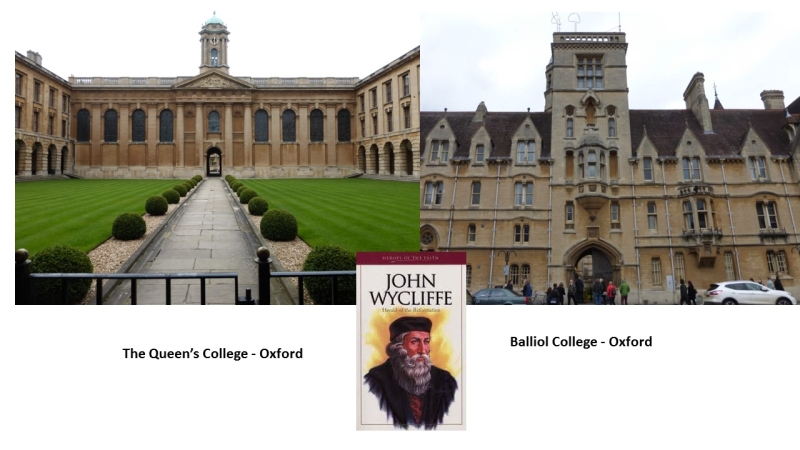