Rochester Cathedral, founded in 604AD by Bishop Justus, is England's second oldest.  Although we did not see it, a restored copy of a Vinegar Bible has recently been returned to the Cathedral.  It is a collector’s item because of its “unholy bad spelling” is referred to as “Baskett-ful of errors”!  One of the most famous misprints is in the page heading in Luke 20:9, where "The Parable of the Vineyard" became "The Parable of the Vinegar", hence the nickname of 'Vinegar Bible.' 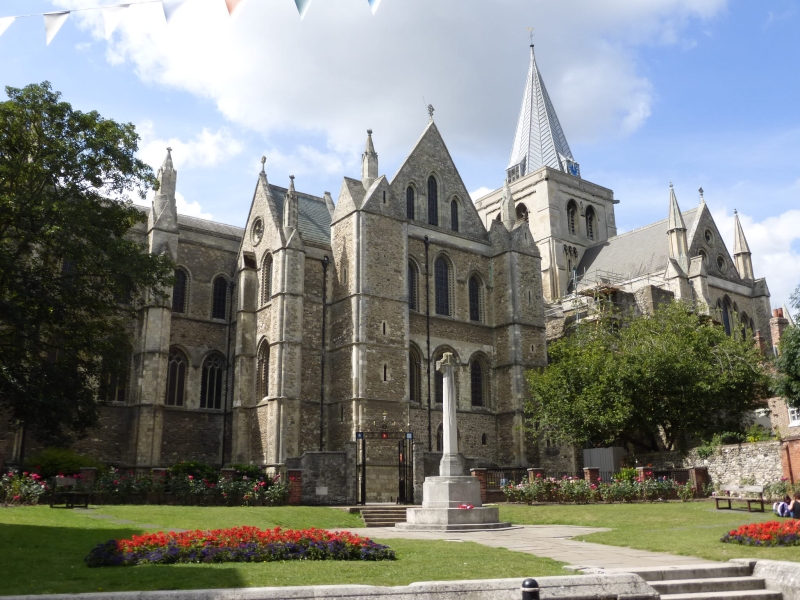 Rochester Cathedral became a major place of pilgrimage in the 13th century, following the death of William of Perth, a Scottish baker who was murdered nearby.  His body was brought to the Cathedral and at his shrine, of which no trace remains, miracles were reported.  Modern pilgrims who journey to the Cathedral still climb the Pilgrim Steps, now worn by the many thousands of medieval pilgrims visiting the shrine, often lighting candles at the William of Perth prayer-station in front of the oratory. 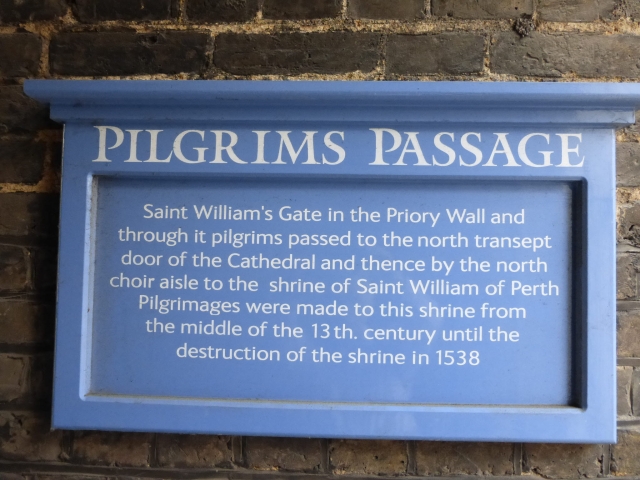 Parish Church of St. George has been a place of prayer and worship for more than 250 years where people have come hear and uphold the Gospel of Christ. 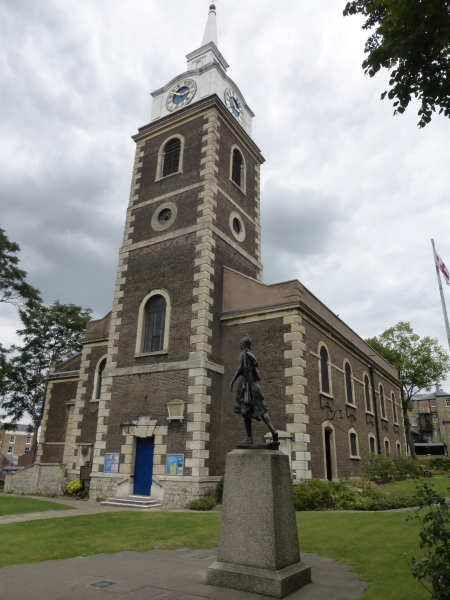 Pocahontas (1595-1617), first native Christian convert in North America, is buried at St. George’s in Gravesend.  Chesterfield, VA, is a twin city; and the visitors’ center included a vast amount of information about Virginia! 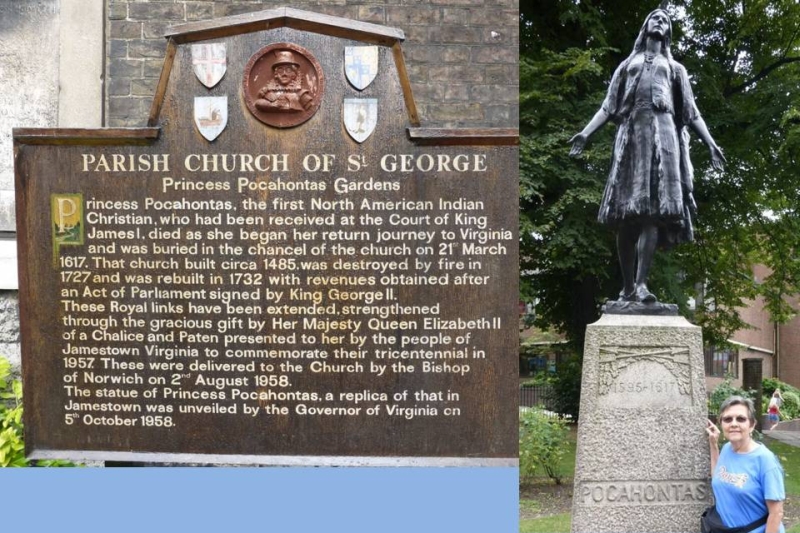 St Dunstan's-in-the-West was built between 1831 and 1833, replacing an earlier church on that site. The former church was pulpit for many prominent preachers including William Tyndale (1494-1535) and the well-known puritan pastor Richard Baxter (1615-1691). 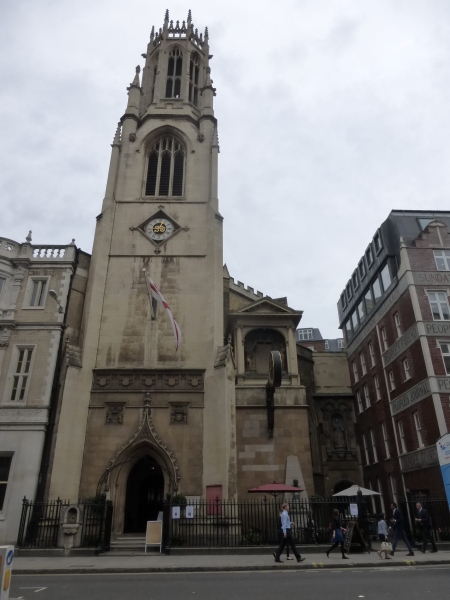 The main body of St Dunstan's-in-the-West is octagonal, while the stone tower beside the pavement has an overhanging clock with wooden figures striking the bells, which was taken from the original church. 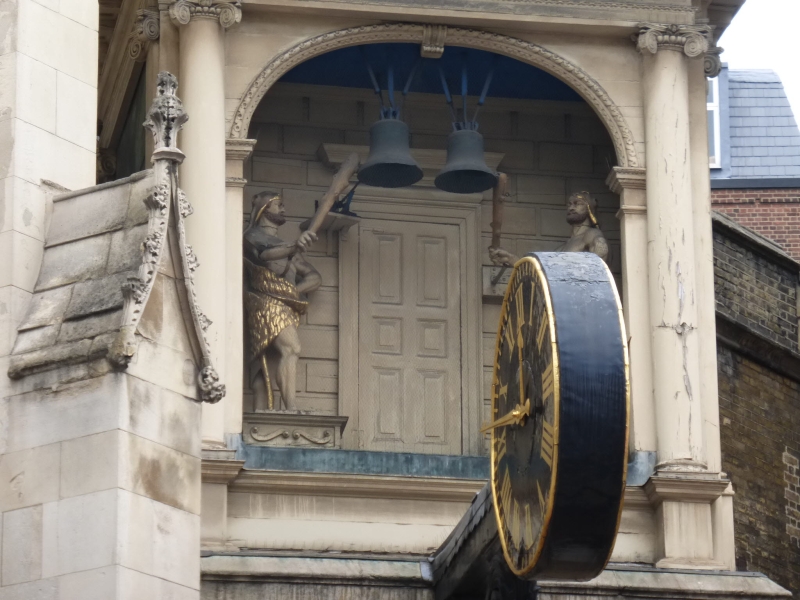 Smithfield is where more than sixty martyrs were burned at the stake for their faith, mainly during the reign of Queen Mary.  On the wall of the hospital is this granite memorial erected in 1870. With the Biblical text "Blessed are the dead which die in the Lord", it records that "Within a few feet of this spot John Rogers, John Bradford, John Philpot and other servants of God suffered death by fire for the faith of Christ, in the years 1555, 1556, 1557" 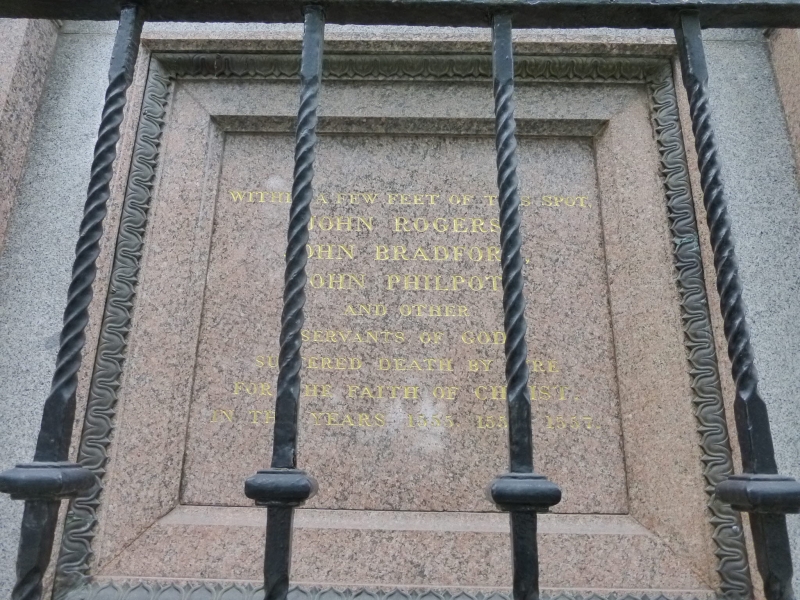 St Sepulchre-without-Newgate is the largest church in the City of London and dates back to 1137.  A former vicar, John Rogers, had the unhappy distinction of being the first protestant martyr of Queen Mary's reign when he was burned at the stake at Smithfield on February 4, 1555. 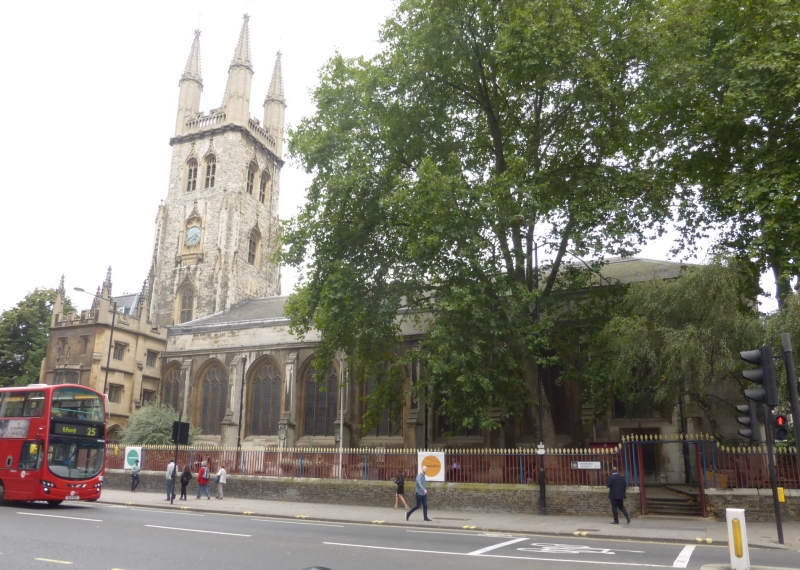 The Church of the Holy Sepulchre (known as St Sepulchre's) - stands close to the site of Newgate Prison where John Rogers was imprisoned.  One of his parishioners was John Daye, a printer who shared Rogers' views and also his prison cell.  Daye, however, survived Mary's purges and went on to print that celebrated chronicle of those times, the Acts and Monuments of John Foxe, better known as "Foxe's Book of Martyrs". 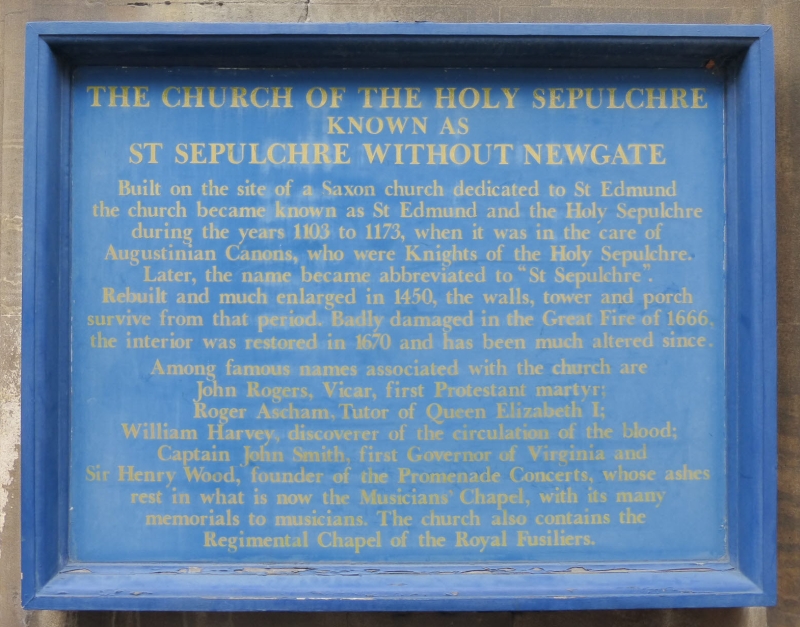 St. Sepulchre’s  great bell would be rung to mark the execution of a prisoner at the nearby gallows at Newgate.  The clerk of St Sepulchre's was also responsible for ringing this handbell, known as the Execution Bell, outside the condemned man's cell in Newgate Prison to inform him of his impending execution. 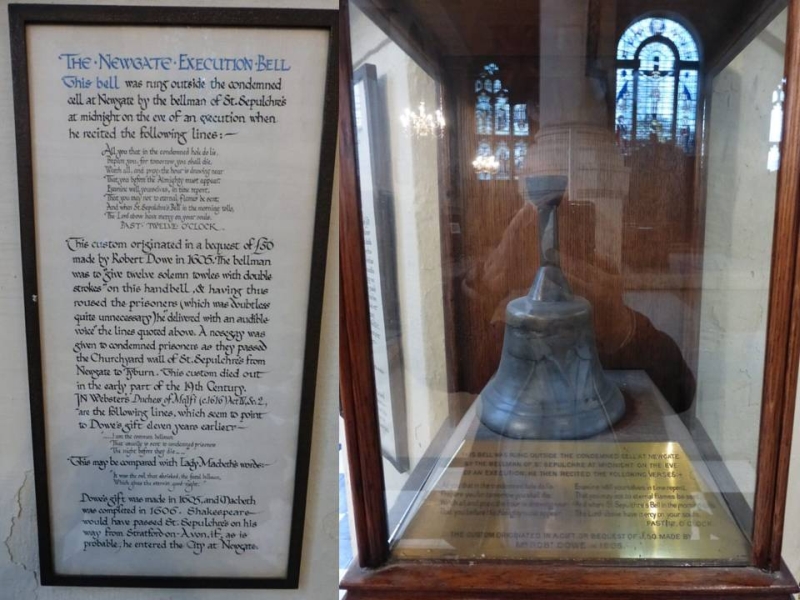 We attended an afternoon service in St. Sepulchre's beautiful sanctuary with so much history.  John Bunyan died in 1688 of pneumonia in a house near this church. 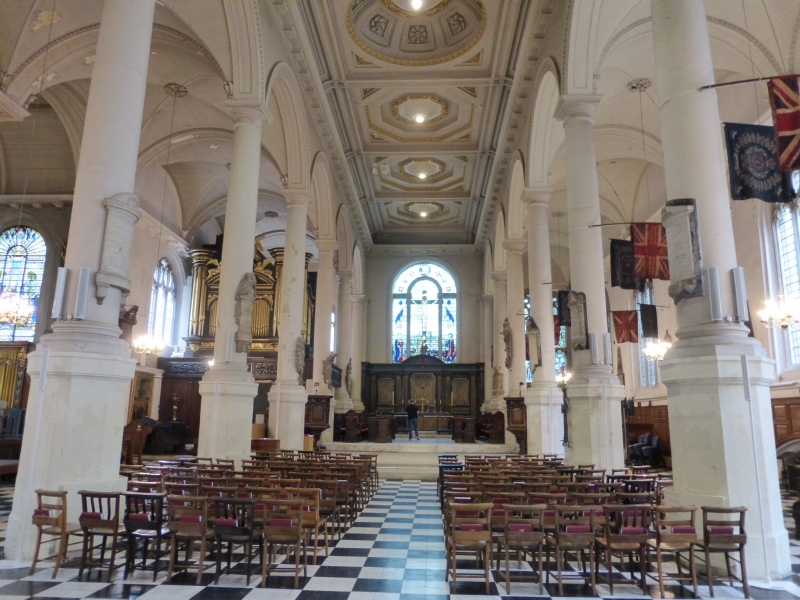 This window in St. Sepulchre’s commemorates John Smith (whose life was saved by Pocahontas) founder of Jamestown, VA, governor of Virginia.  He returned to England in 1615, where he remained until his death in 1631.  He was buried in the south aisle of St. Sepulchre’s (although the precise location of his grave was lost in the Great Fire of 1666. 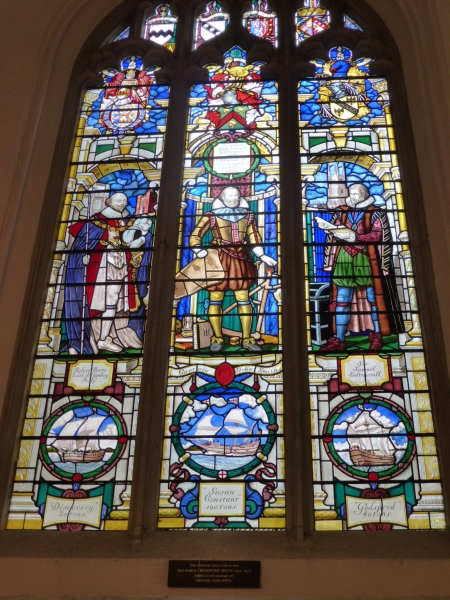 This tablet was erected by the International Methodist Historical Union on May 24 1926 to the glory of God in commemoration of the Evangelical Conversion of the Rev. John Wesley, M.A. on May 24, 1738. and of the Rev. Charles Wesley, M.A. on May 21, 1738.   The actual site of the meeting room of the Religious Society was probably nearby at 28 Aldersgate Street.  This site is near St Batholomew's Hospital, London City. 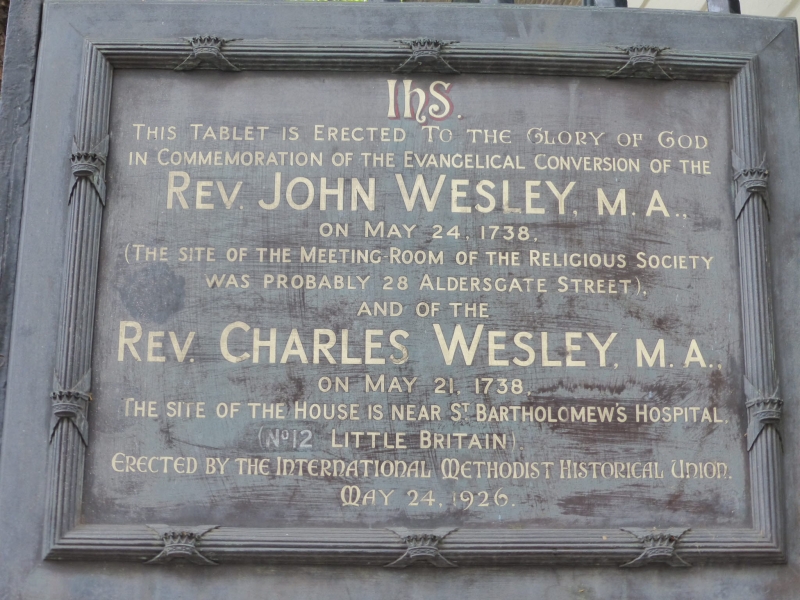 St. Paul’s Cathedral’s churchyard has this statue of John Wesley "priest, poet and teacher of the faith". 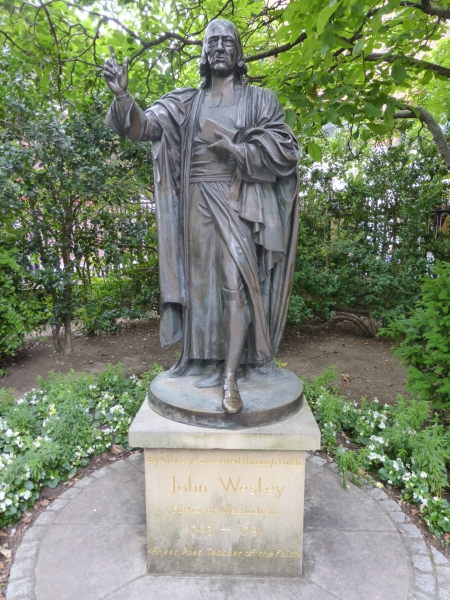 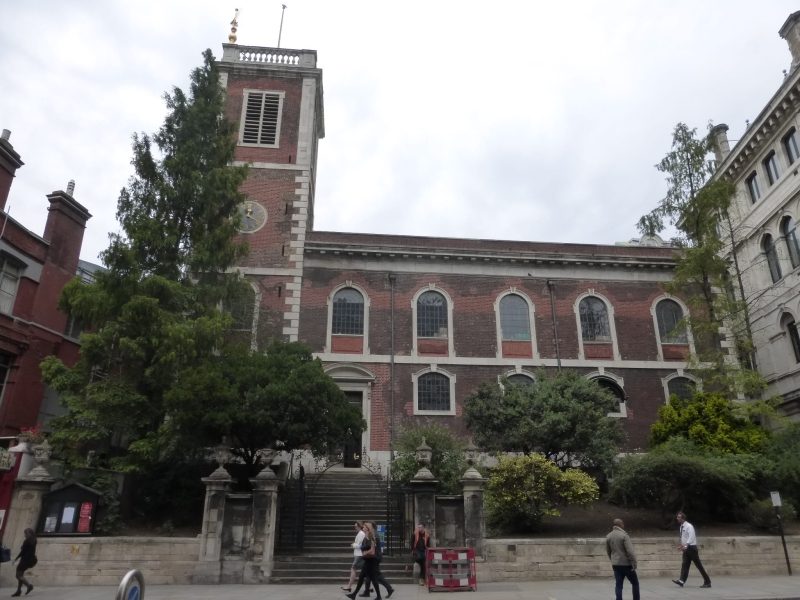 St. Andrew by the Wardrobe - From 1799 to 1812, committee meetings of the newly founded Church Missionary Society were held in the church. For many years the offices of the British and Foreign Bible Society were located next door. 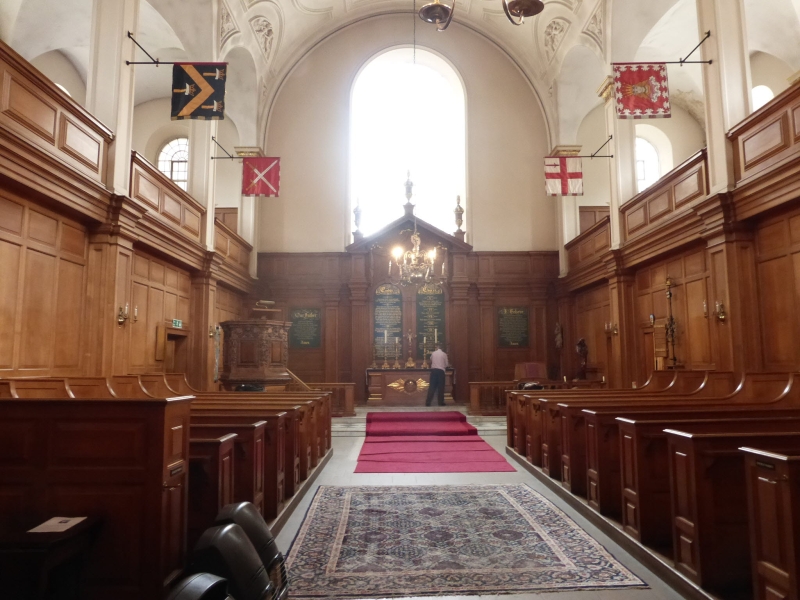 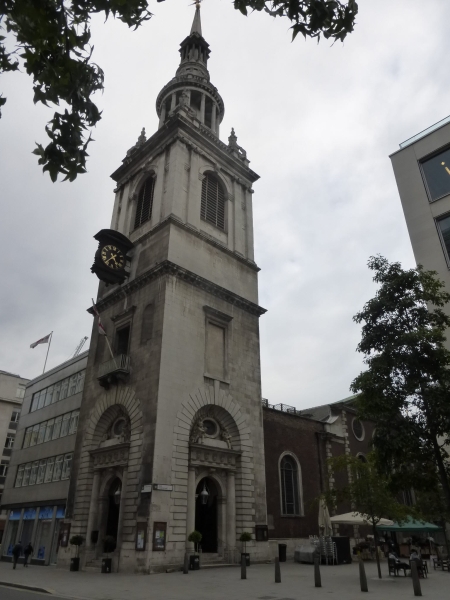 St. Mary LeBow – John Milton was born on this street in 1608 and baptized at All Hallows church (no longer standing).  A tablet on the side of St. Mary LeBow commemorates his baptism and has a poem in praising him. 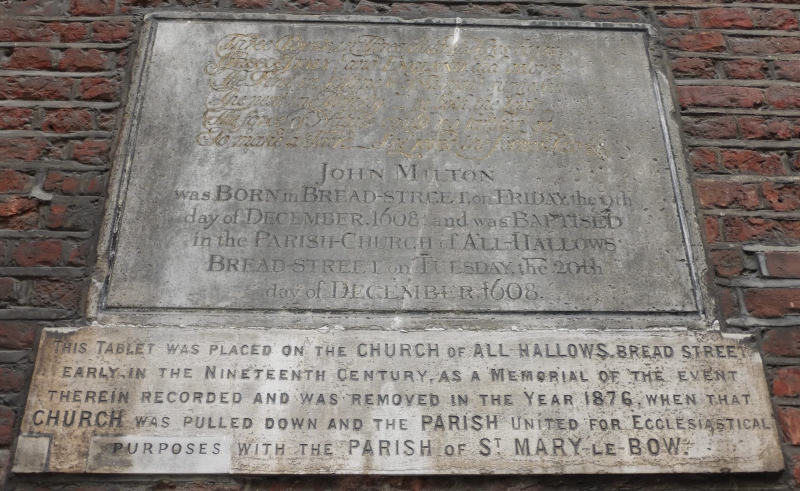 St. Mary LeBow – John Smith’s statue was given by the Jamestown Foundation of the Commonwealth of Virginia in 1960.  “Smith, a colonial adventurer, was a Citizen and Cordwainer (shoemaker), and set sail from Blackwall to found the colony of Virginia in 1606. Following a period as the prisoner of the native Americans he became head of the settler's colony...”  The statue was placed at this location because it was close to the old site of Cordwainers' Hall, and because the church of St. Mary le Bow was the setting for a number of sermons in furtherance of the colonization of the New World in the early seventeenth century. 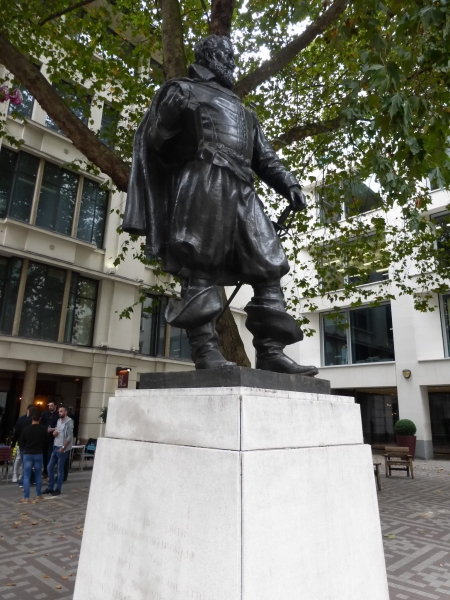 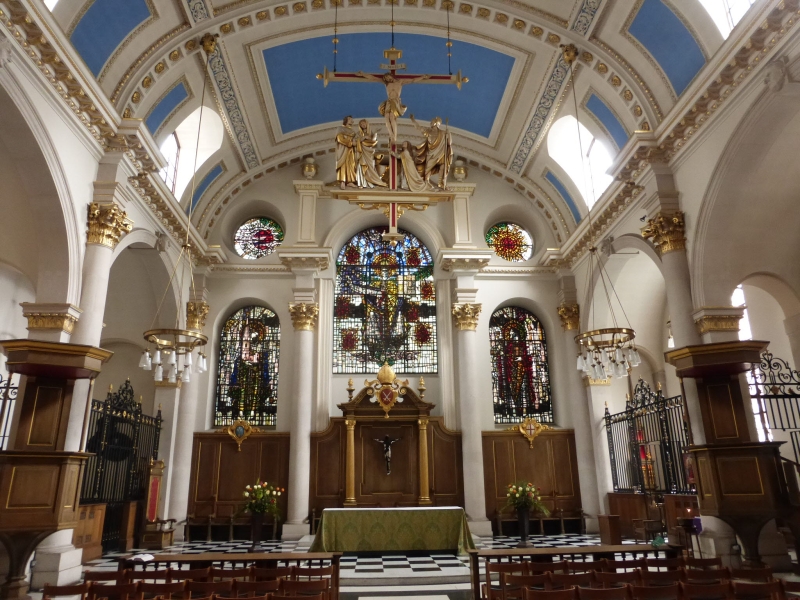 London Temple Church was built by the Knights Templar, the order of crusading monks founded to protect pilgrims on their way to and from Jerusalem in the 12th century. The Church is in two parts: the Round and the Chancel. The Round Church was consecrated in 1185 by the patriarch of Jerusalem. It was designed to recall the holiest place in the Crusaders’ world: the circular Church of the Holy Sepulcher in Jerusalem. 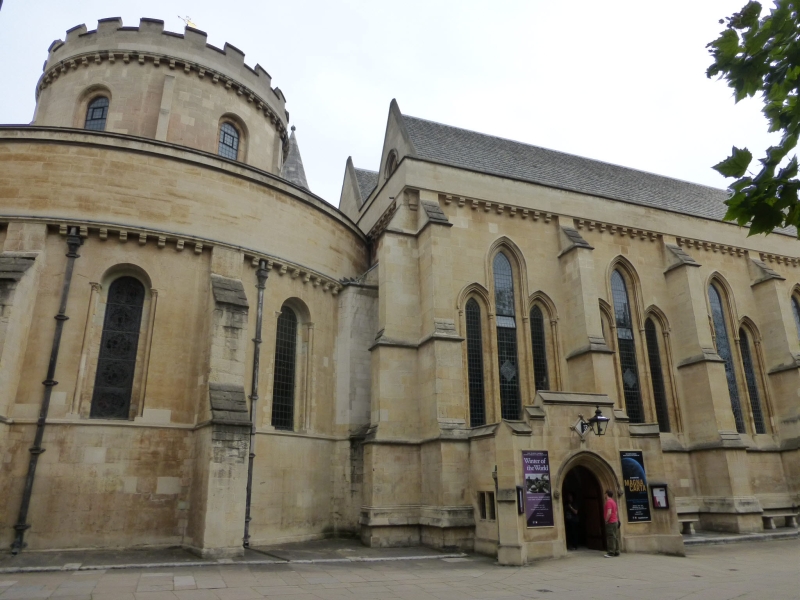 It was especially significant to visit Temple Church because of its connection with the Magna Carta which was signed 800 years ago (1215).  In January 1215 William Marshall (who is buried in the nave next to his sons, and is represented by one of the nine stone effigies)  served as a negotiator during a meeting in the Temple between King John and the barons, who demanded that the king should uphold the rights enshrined in the Coronation Charter of his predecessor and elder brother King Richard I.  Marshall swore on behalf of the king that the grievances of the barons would be addressed in the summer, which led to the signing by the king of Magna Carta in June. 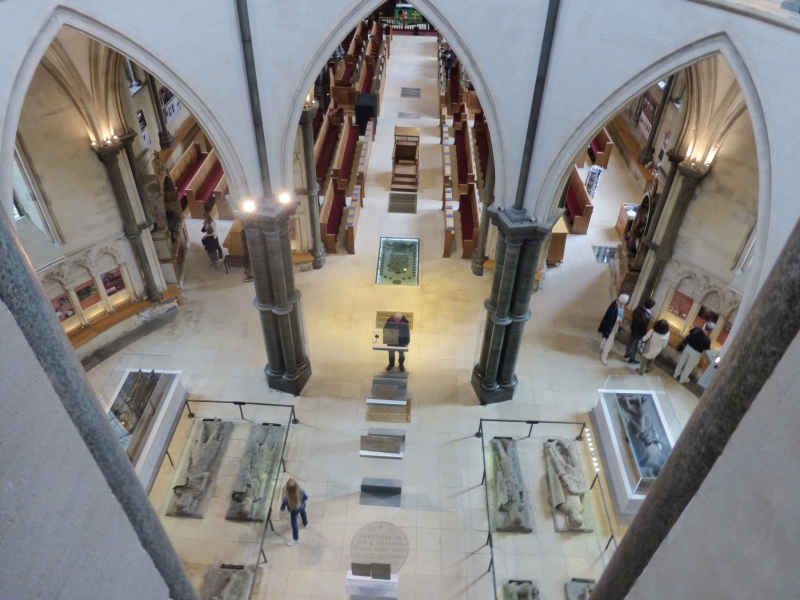 Temple Church is jointly owned by the Inner Temple and Middle Temple Inns of Court, bases of the English legal profession. It is famous for being a round church, a common design feature for Knights Templar churches, and for its 13th and 14th century stone effigies. 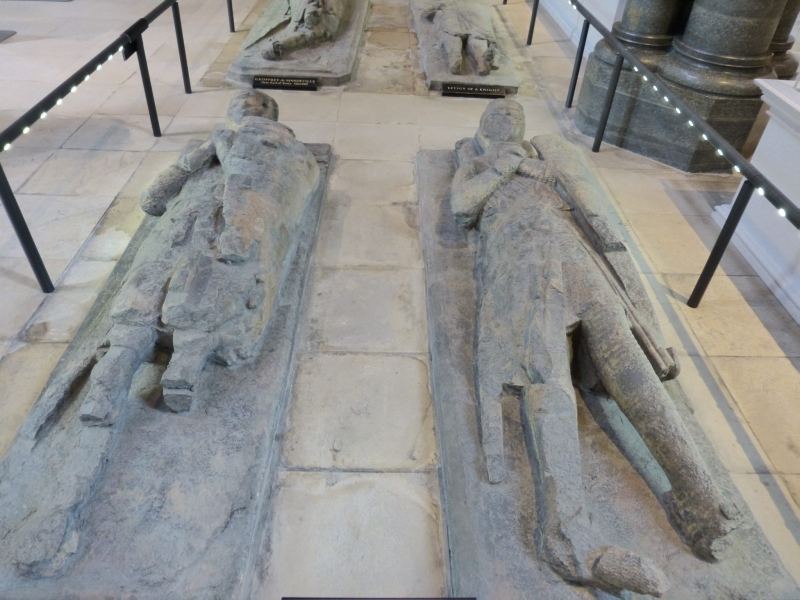 Church of St Bartholomew-the-Great was founded in 1123 by Rahere, a courtier of Henry I, son of William the Conqueror.  It was part of a monastery of Augustinian Canons. 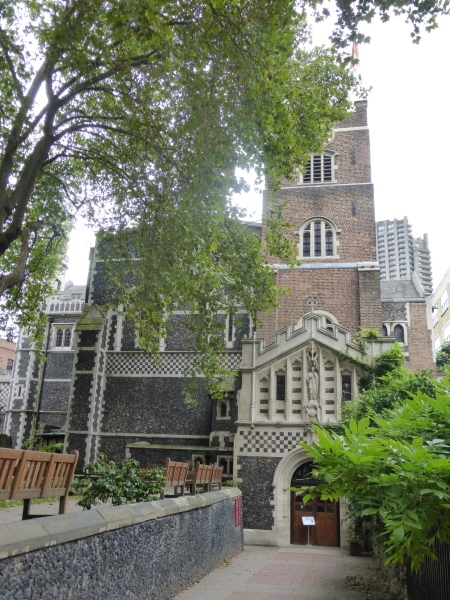 Church of St Bartholomew-the-Great.  Nearby is St Bartholomew's Hospital, the oldest hospital in Europe, having been founded in 1123 thus being the oldest in the United Kingdom still occupying its original site.  Extensive scaffolding preventing our taking pictures, but we visited the hospital museum which details a fascinating history of medical care and training of doctors and nurses. 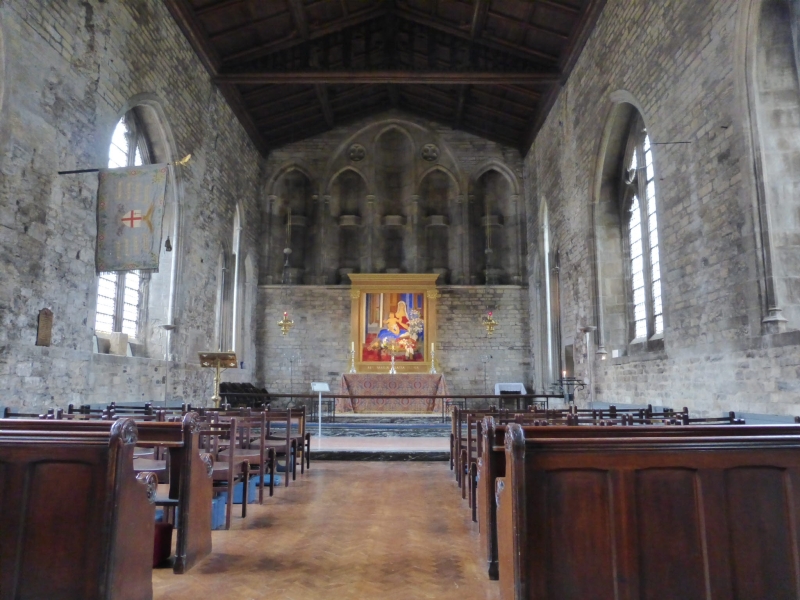 We liked this Epiphany sign on the side of The Chapel Royal, an 18th-century place of worship in Brighton.  Richard’s birthday is also January 6. 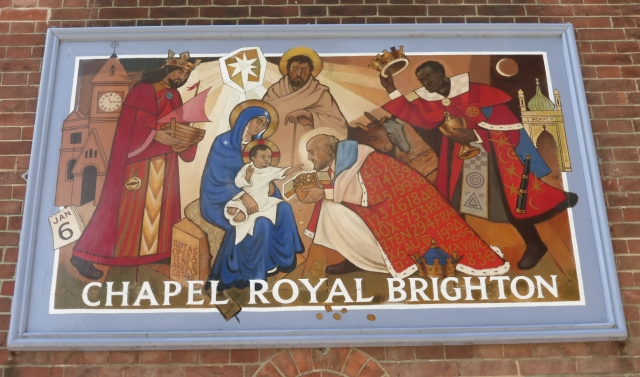