This year we spent our Christmas holidays in Marrakech, Morocco which was established in the 11th century.  The fortified old city of Marrakech is known as the Red City. It is known as the red city because its pink-tinted buildings reflect the light like a rose quarts gem. It is also known as the “Red City” due to its famous and inviting red walls, alleys and plazas.  The old city of Marrakech is shaped like a teardrop, rimmed with about ten miles of wall. The name Marrakech originates from the Amazigh (Berber) words mur (n) akush, which means "Land of God."   Strategically placed gates in the wall allow access into the old city. 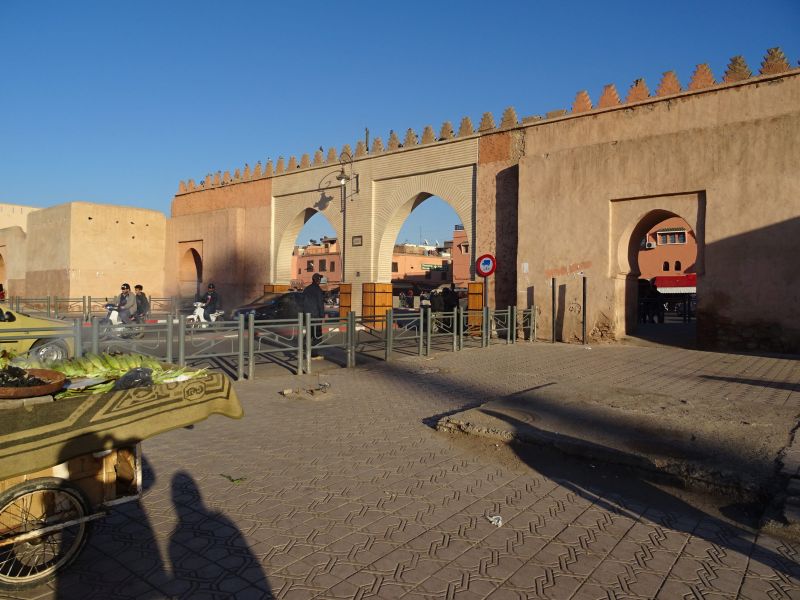 The Medina (old city) is packed with Riads and Dars (old grand houses converted into hotels and inns).  Riads should have gardens; smaller Dars have open courtyards. However the term Riad is used very loosely today to describe a house with an internal open-air center.  We stayed at Riad LePlein Sud, which was a 300 year old house with 6 guestrooms. 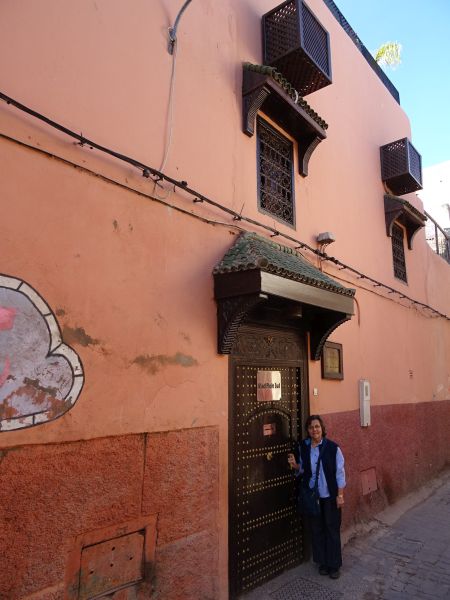 The old city is full of endless labyrinths of souks (bazaars) and alleyways covering all of the Medina.  The streets are narrow and lined with shops where you can buy almost anything from spices to shoes, jellabas to kaftans, tea pots to tagines and much, much more.  It is easy to get lost and we managed to do so several times. 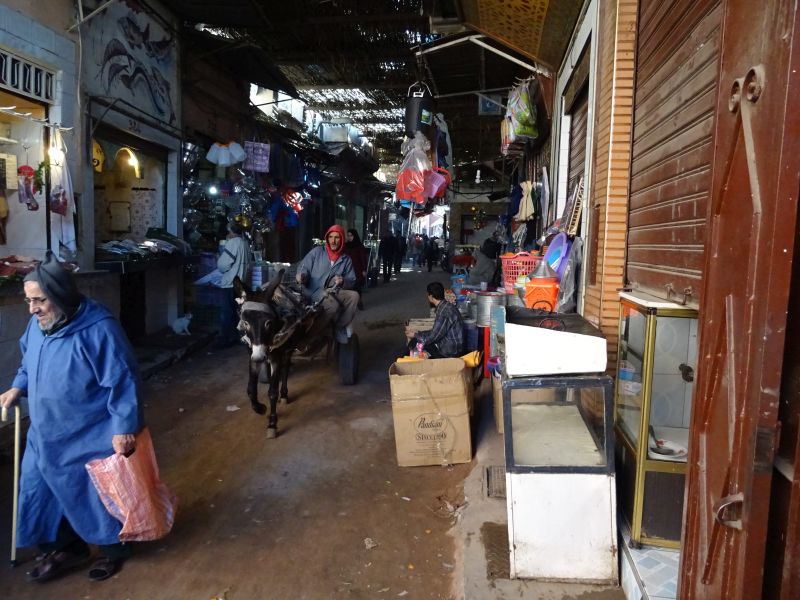 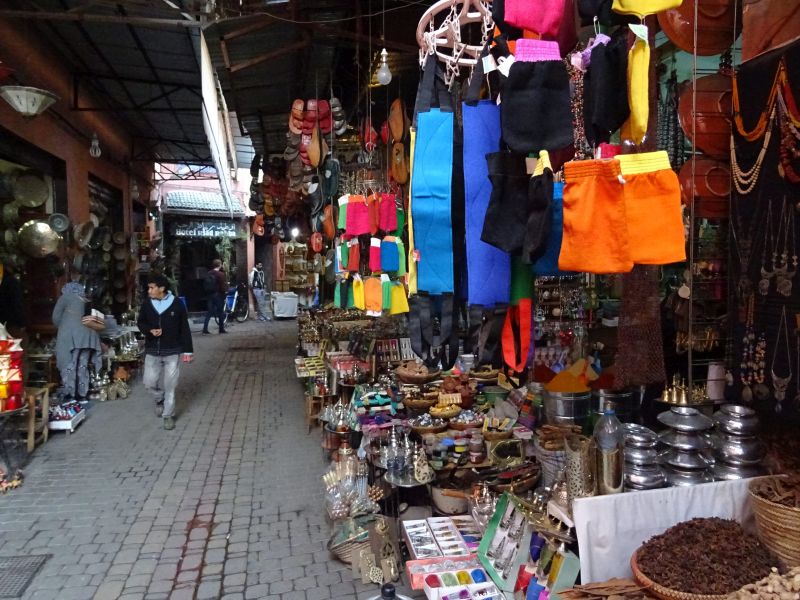 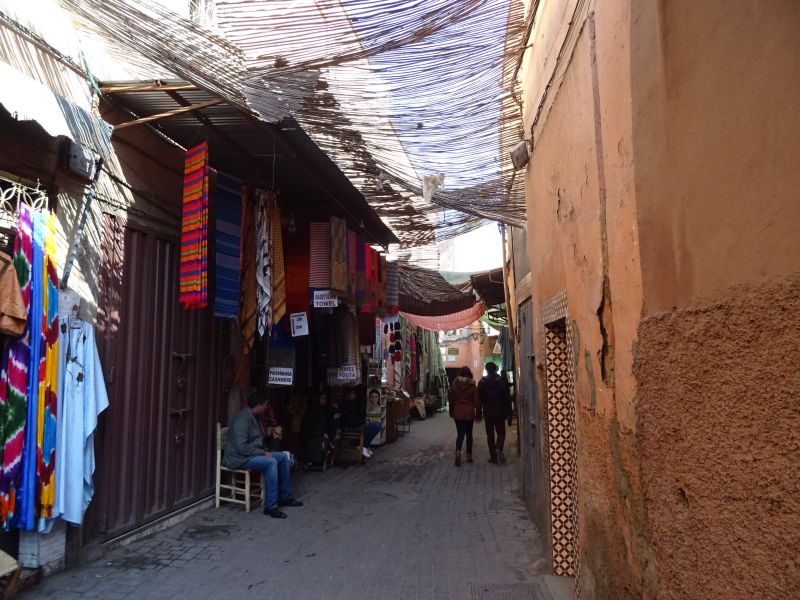 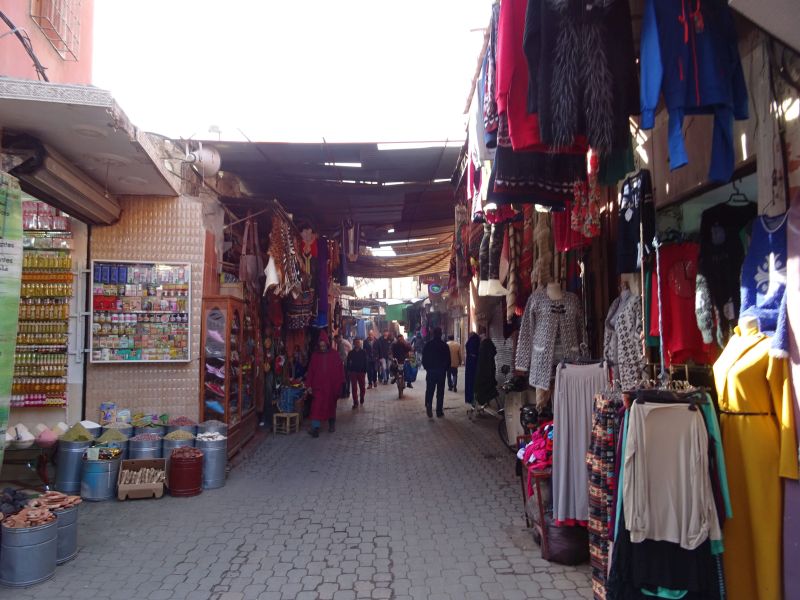 Along the narrow passageways in the old city, we noticed several portable gas stations.  Most of the streets were too narrow for cars, but there were plenty of motorbikes and motor scooters, that needed a place to refuel. 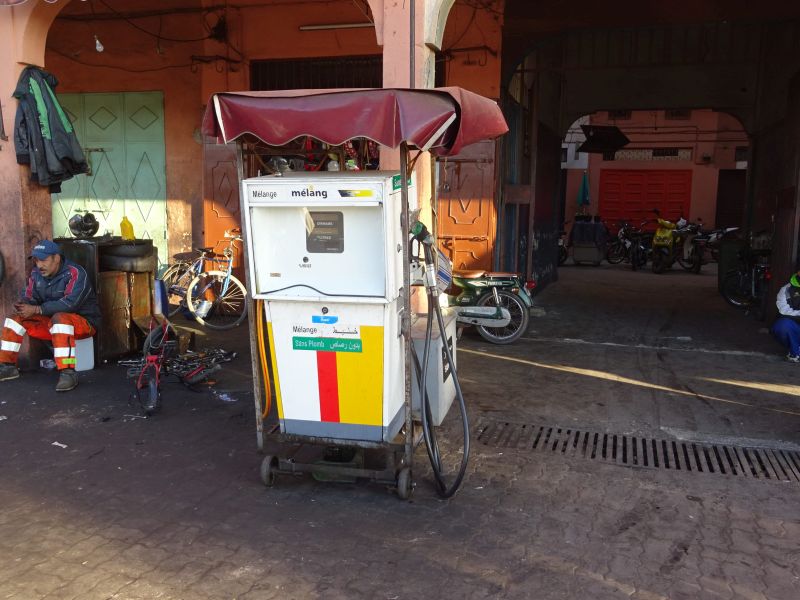 Jemaa el-Fnaa is a huge and bustling square the heart of the old city.  Here you can find snake charmers, performing Barbary apes, storytellers, water sellers in vibrant red outfits, henna tattooists, a variety of vendors selling foods and drinks such as grilled meat, lamb brains, snails, sausage links, couscous, and countless other colorful stuff too numerous to mention. 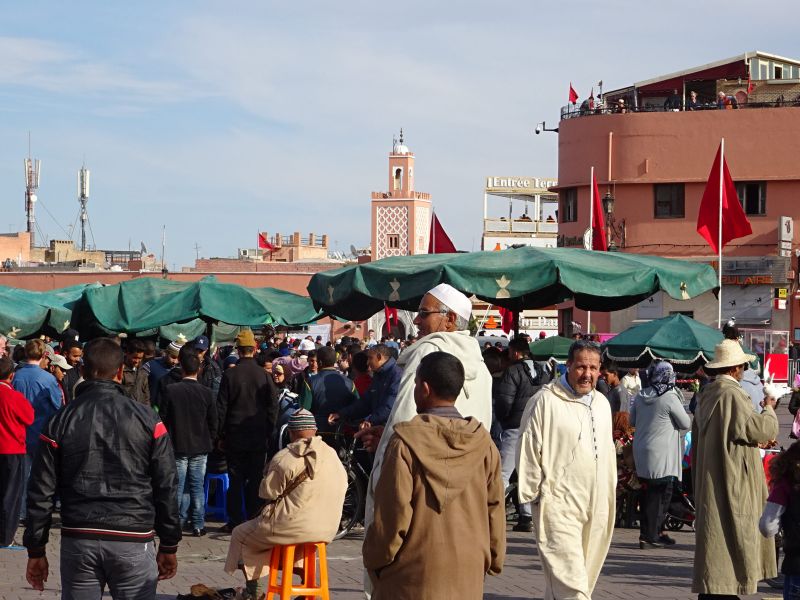 The design in the sidewalks along the main streets made a dizzying effect. Although the sidewalk was flat, it seemed to ripple. 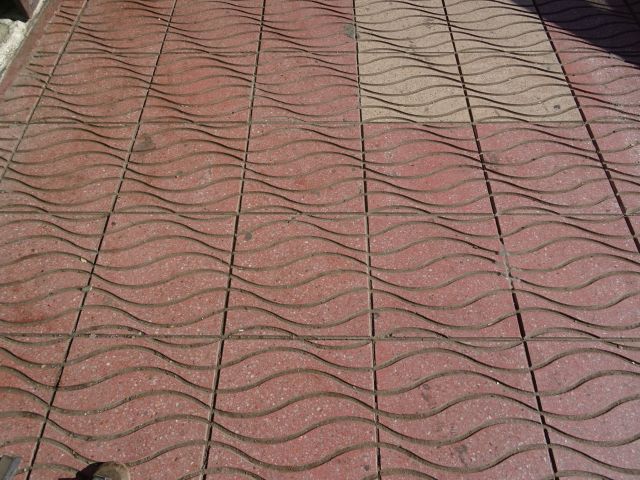 The Mellah is the old Jewish quarter of Marrakesh.  It was established in the 16th century and is now populated mainly by Muslims.  There is only one remaining Jewish Synagogue in Marrakesh.   The Alhambra Decree (also known as the Edict of Expulsion) was an edict issued on 31 March 1492, by the joint Catholic Monarchs of Spain (Isabella I of Castile and Ferdinand II of Aragon) ordering the expulsion of practicing Jews from Spain by 31 July of that year.  Many of the Spanish Jews migrated to Morocco.  Notice the date over the entrance to the synagogue. 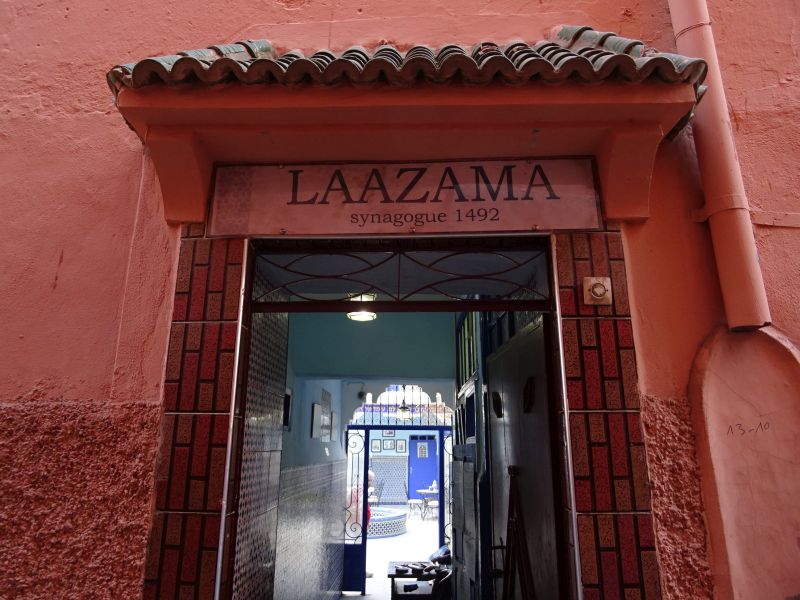 A view of the interior of the Laazama Jewish Synagogue. 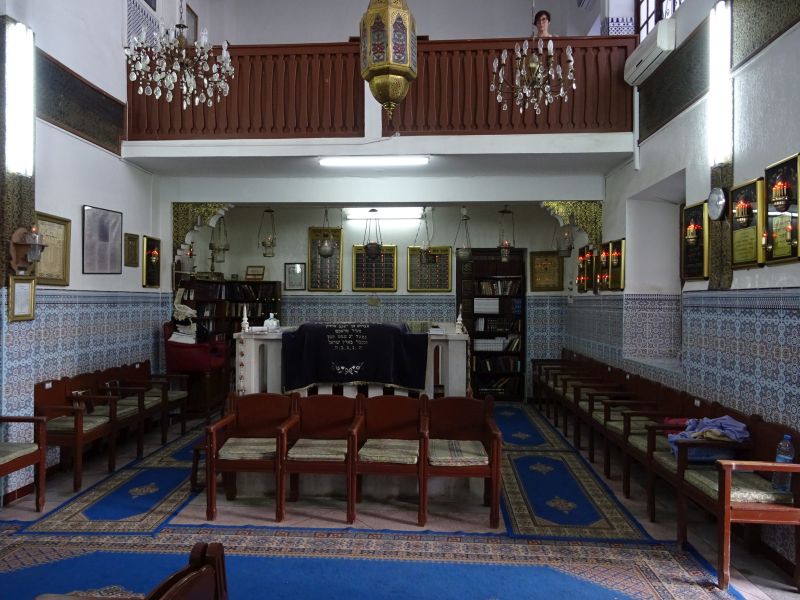 One day we left the old city and walked to Guéliz, which is also known as the new town or Ville Nouvelle.   This part of Marrakech was founded by the French colonials.  Its streets are lined with orange trees. 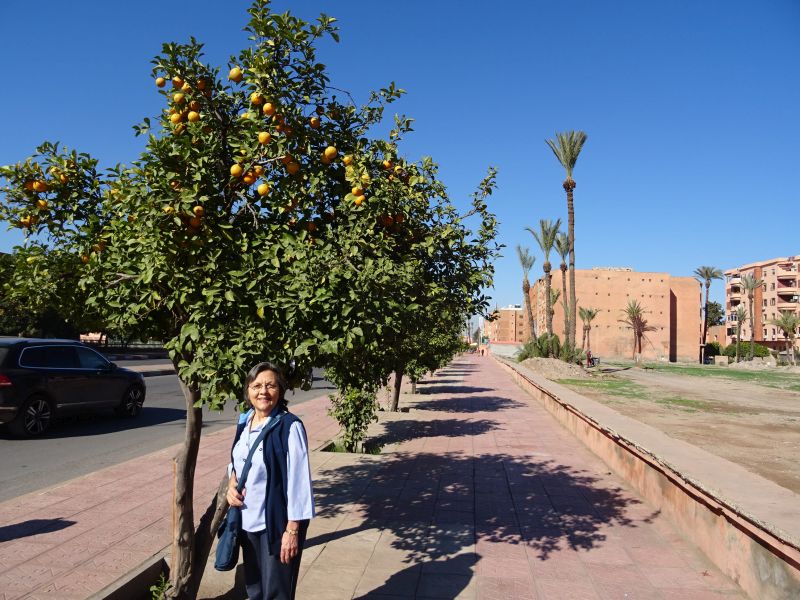 Ville Nouvelle’s leafy side streets are dotted with charming shops where everything has a price tag and there is no need to haggle like is commonly done in the old city.   The new city has modern stores and the only Christmas decorations that we could find in the city. 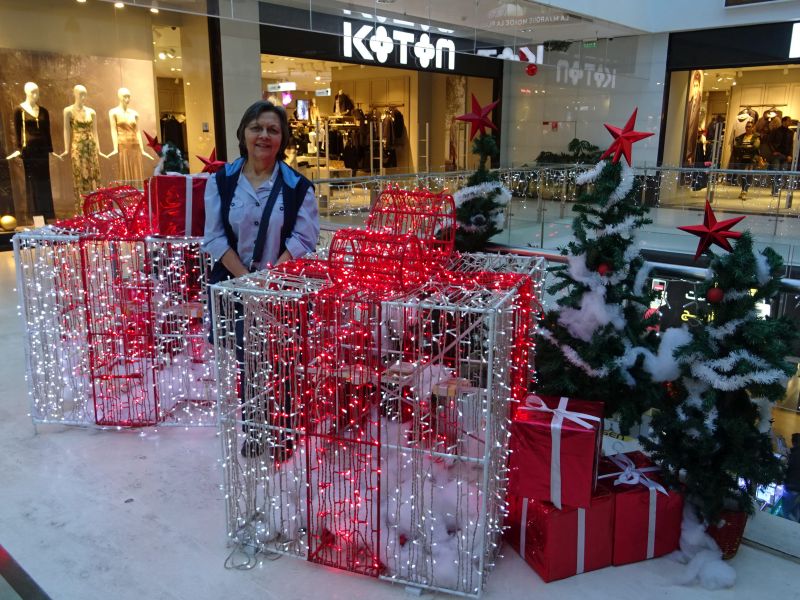 We were able to find only one Christian church – a Catholic Church of the Holy Martyrs which has weekly evening services in French.  Interestingly it was across the street from a large mosque and the entrance to the church was guarded by city policemen. 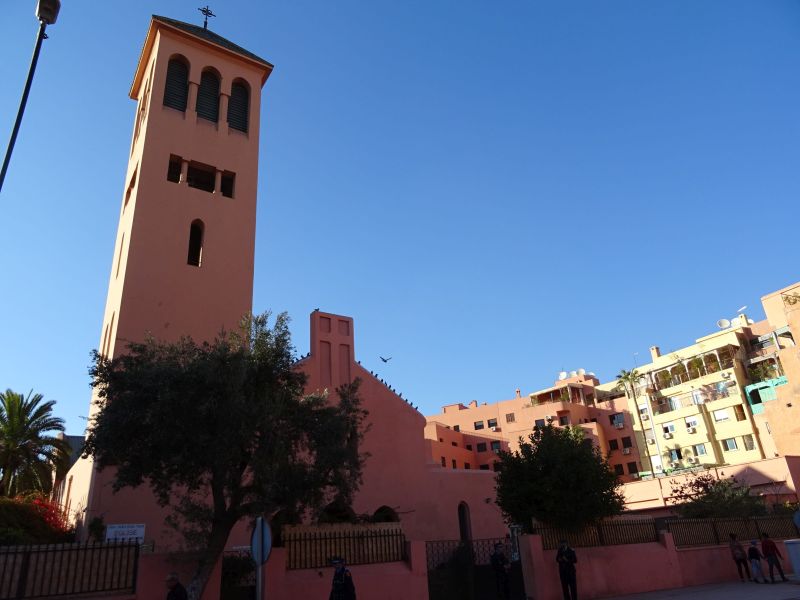 All our meals were Moroccan cuisine.   Christmas dinner included shish-k-babs. 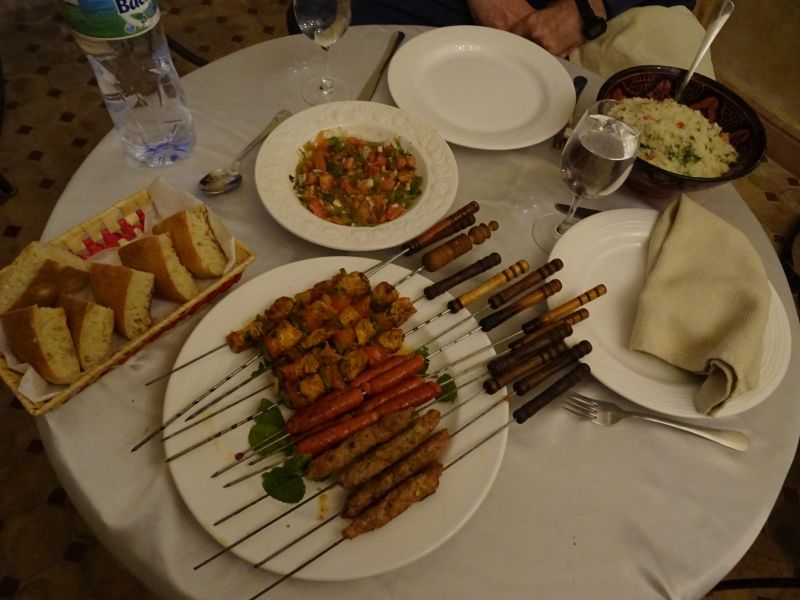 We took a one day trip into the Atlas Mountains.  Our drive took us through the Ourika Valley. 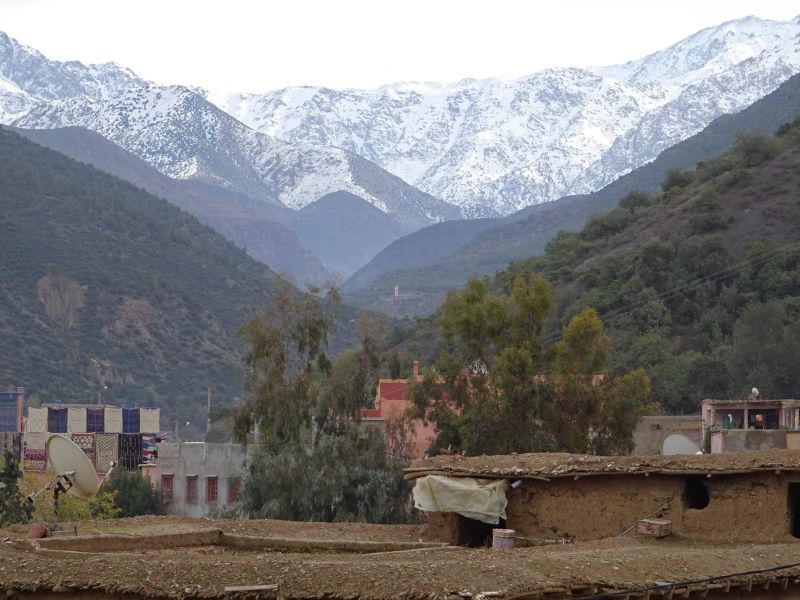 The road wound along a mountain river.   All along the river there were shaky bridges across the river to dozens of restaurants beside the flowing riverbed. 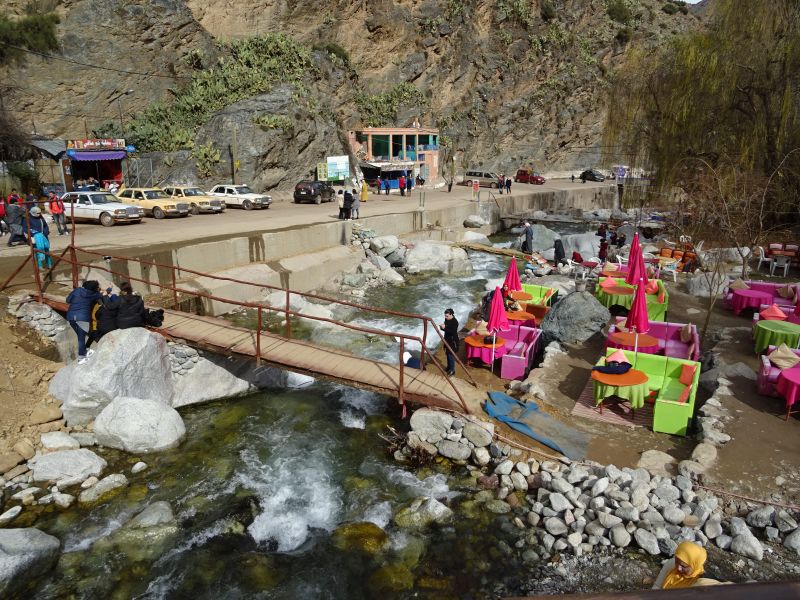 We watching a young Moroccan boy playing with homemade toys. 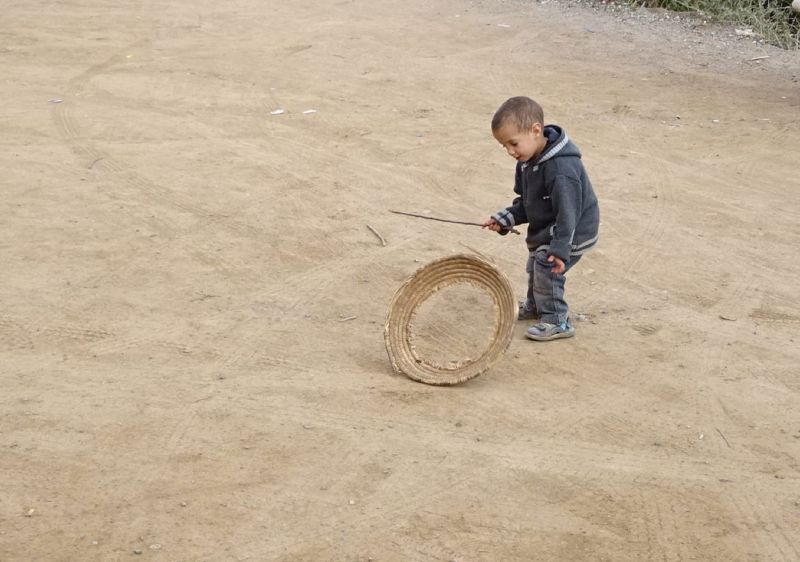 In order to view the Ourika Valley waterfalls we followed an unsigned path tucked away behind the colorful restaurants of Setti Fatma, and wound our way past souvenir stalls and elaborate displays of tins of Coca Cola being cooled by the water from the stream. 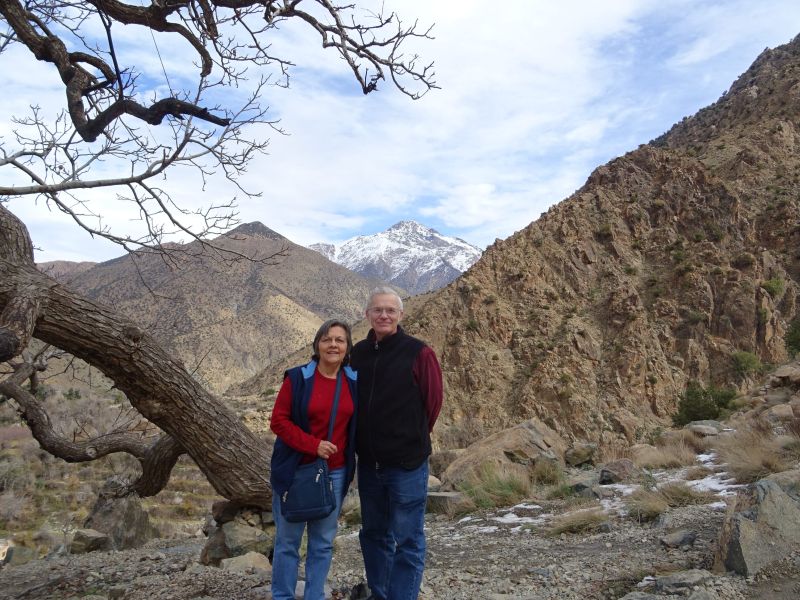 There were actually a series of seven waterfalls.  Each one was higher up the mountain and even more beautiful than the waterfall before. 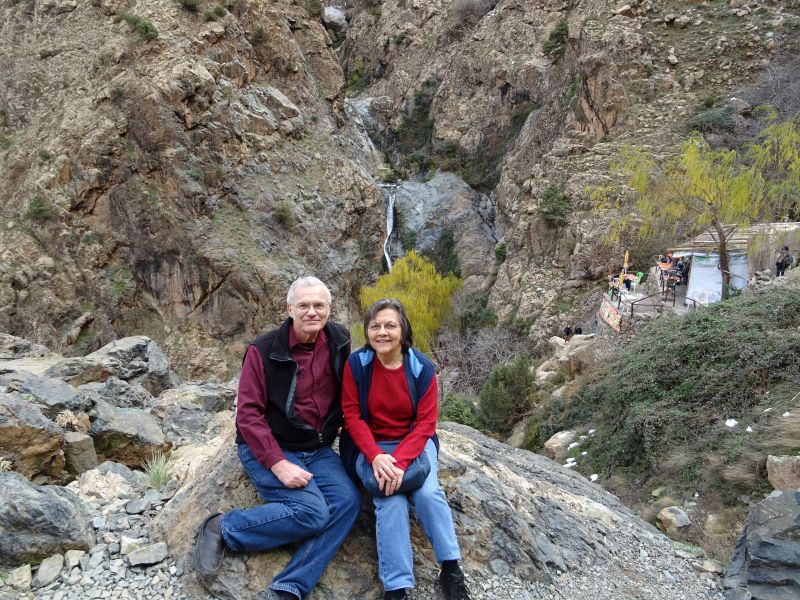 The further up the mountain we went, the more snow we encountered.   We had to travel to Africa just to experience a white Christmas.   Crossing over huge rock formations and avoiding slipping in the stream, we finally got to the seventh waterfall. 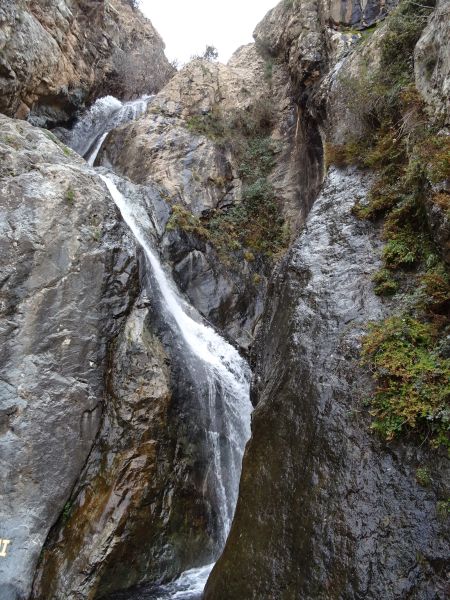 After our trek to see the waterfalls, we stopped to have some Moroccan mint tea at one of the restaurants along the river.   Here is Richard pouring mint tea in a typical Moroccan fashion. 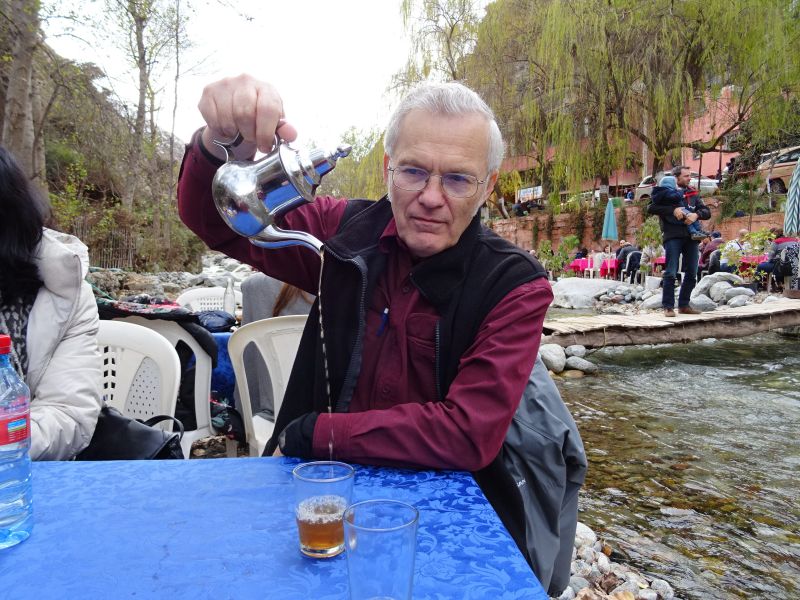