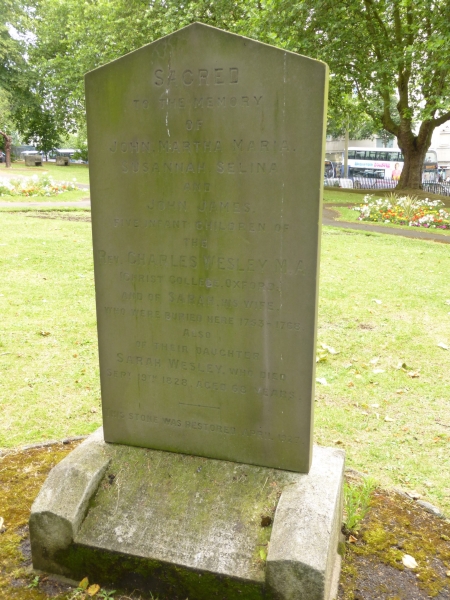 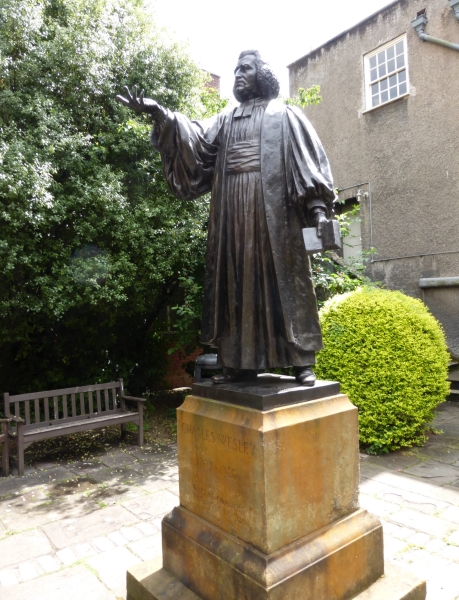 Sundial in the garden at the home of Charles Wesley, Bristol 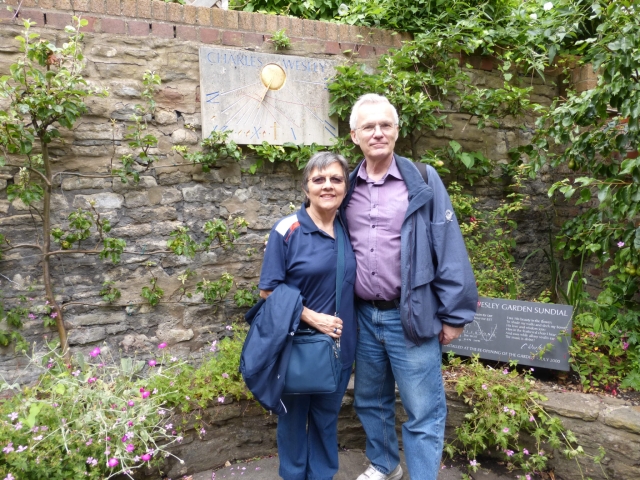 At this desk Charles Wesley penned many of his 9,000 hymns. 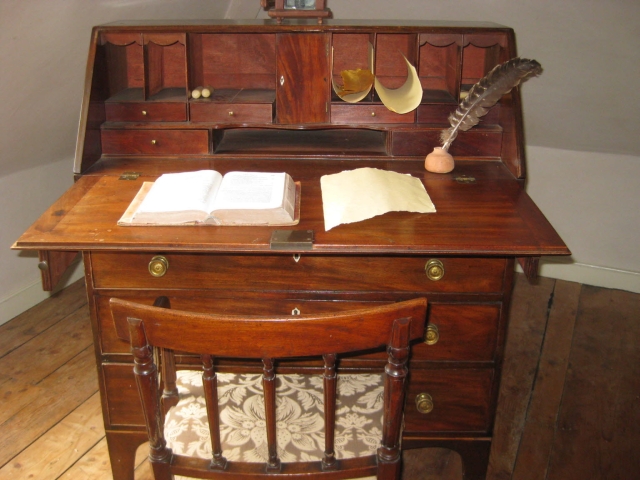 John Wesley near The New Room (Wesley Chapel), Bristol
The name “New Room” continues today.  Many people were becoming Christians at the outdoor meetings.  Because so many people were meeting in homes that in one home the floor fell through,  it was decided to build this bigger meeting place.  Upstairs were lodging rooms for the preachers trained by John Wesley. 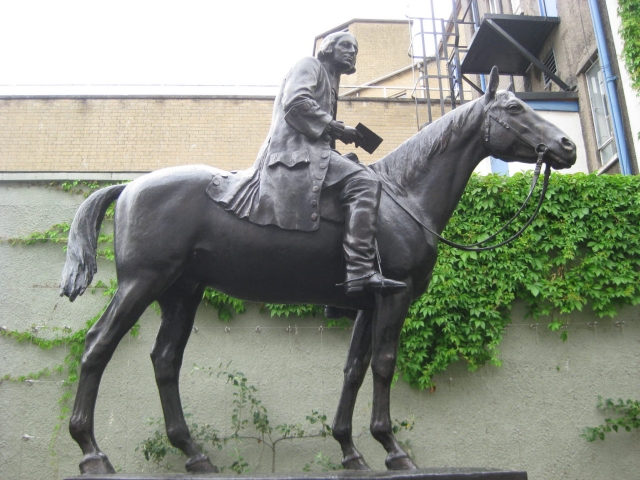 Interior of The New Room (Wesley Chapel), Bristol
Oldest  Methodist building in the world, built in 1739 by John Wesley
Note the 8-sided lantern “sky light” window which helped light the sanctuary since there were no ground level windows. 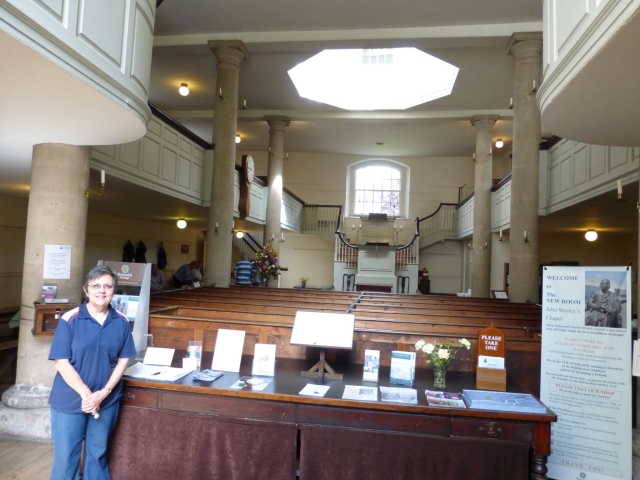 View from Pulpit of The New Room (Wesley Chapel), Bristol
The ground floor of the sanctuary had no windows and no access to the pulpit from the ground level because preachers were subject to attacks by those who disagreed with their message.  Stairs leading to upper levels provided a means of escape for the preachers. 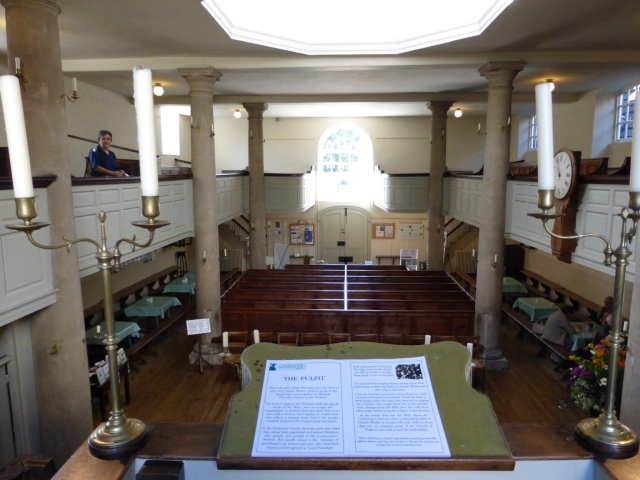 Clock that belonged to John Wesley 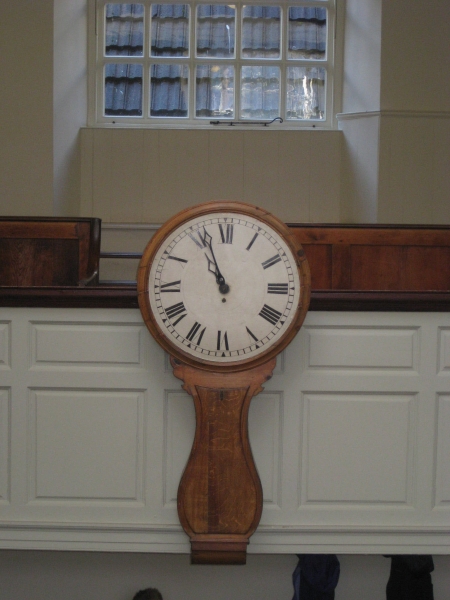 Hanham Mount - George Whitefield first preached here on 17th February 1739. He wrote "I believe I was never more acceptable to my Master than when I was standing to teach those hearers in the open fields".   After preaching for some days to numbers that grew steadily from a few hundreds to nearly 20,000, he was called away to other duties and sent for his friend John Wesley to fill the gap. Wesley arrived on 31st March and vividly described his initial reluctance, "I could scarce reconcile myself to this strange way of preaching.... I should have thought the saving of souls a sin, if it had not been done in a church". However, realizing that the Sermon on the Mount was delivered under an open sky, he soon got used to the idea, and his diary often refers to open air preaching at Hanham and Kingswood over the next forty years. 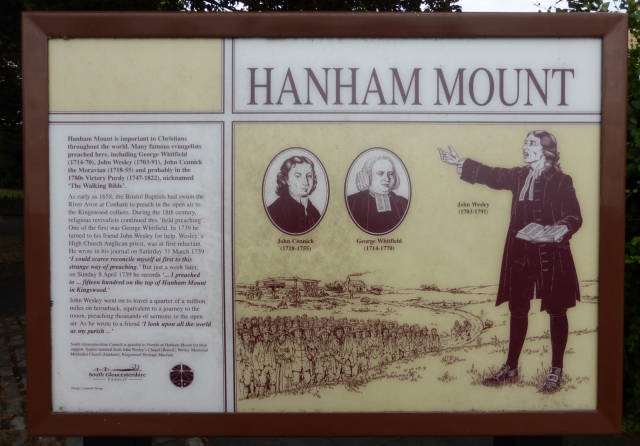 What a blessing for Richard to stand where John Wesley and George Whitefield stood to preach the gospel!  We prayed here for a spiritual awakening in this land and around the world. 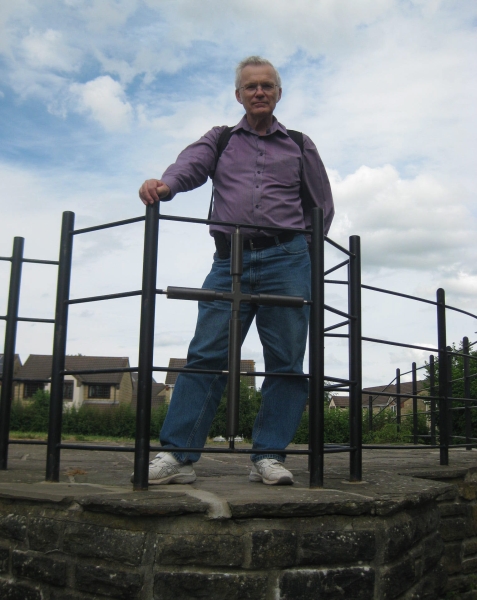 Cross at Hanham Mount
Whitefield and Wesley were not the first to use this spot for open air worship. From 1658 to 1684 the woods covering the hill were a meeting place for Baptists, at a time when non-conformist meetings were forbidden or severely restricted. To reach the place, preachers would sometimes risk life and liberty by swimming the flooded River Avon at Conham to bring the gospel to the Kingswood colliers. 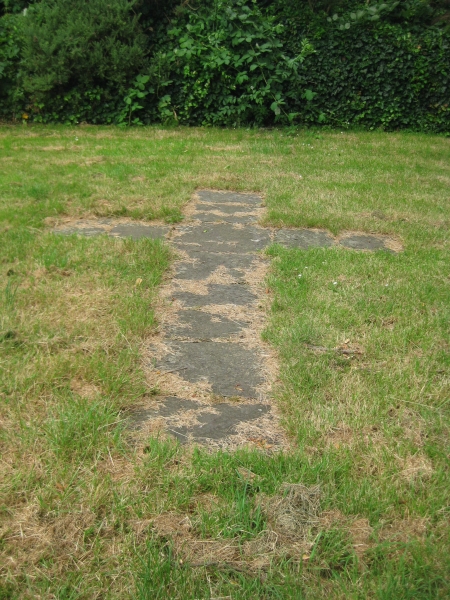 Bath Abbey - Three different churches have occupied the site of today’s Abbey since 757 AD. First, an Anglo-Saxon monastery which was pulled down by the Norman conquerors of England; then a massive Norman cathedral which was begun about 1090 but lay in ruins by late 15th century; and finally, the present Abbey Church as we now know it.
The first King of all England, King Edgar was crowned on this site in 973.  The service set the precedent for the coronation of all future Kings and Queens of England including Elizabeth II. 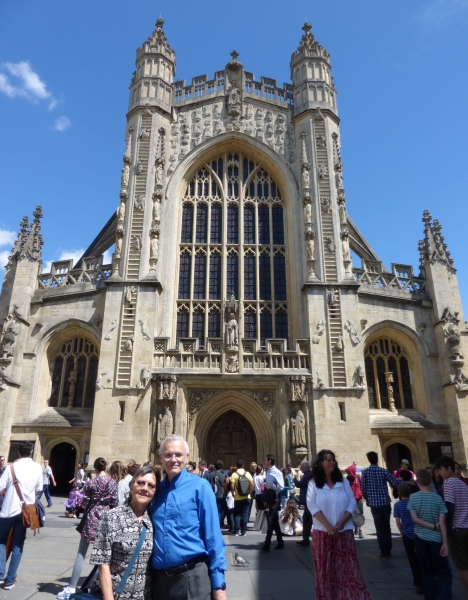 St Alfege (Greenwich) is dedicated to the memory of Alfege, the Archbishop of Canterbury who was martyred on this site in 1012.  The church has connections with many famous figures in British history, including Henry VIII, Thomas Tallis, General James Wolfe, and John Flamsteed.  We quietly observed a lovely wedding ceremony during our visit. 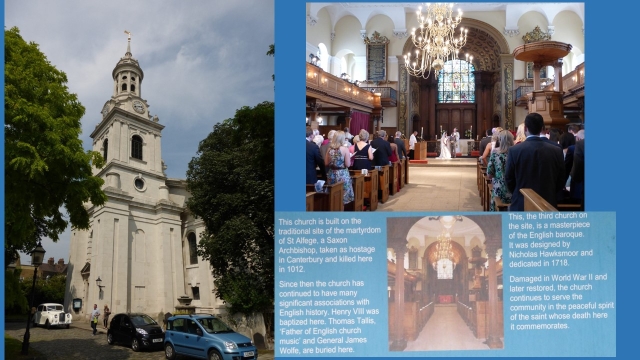