We took a cable car to the top of the Rock of Gibraltar. 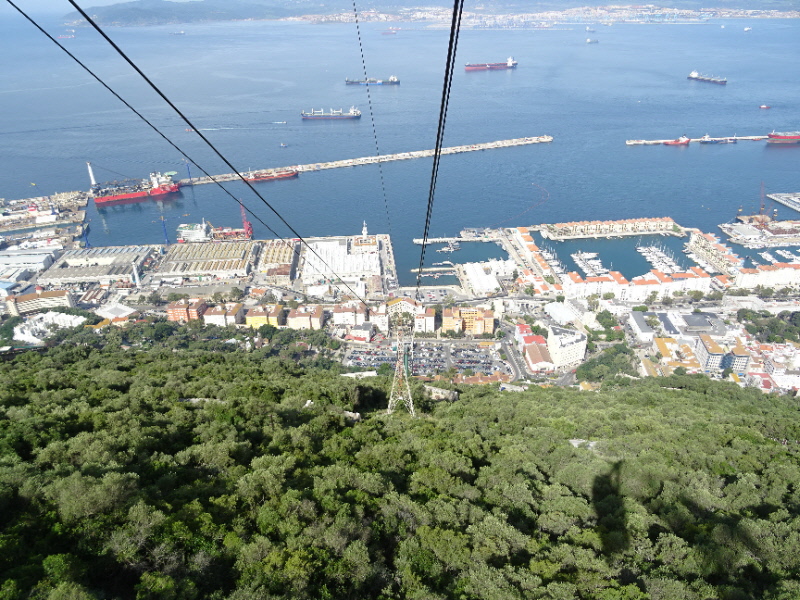 View of the top of the Rock of Gibraltar – looking north into Spain. 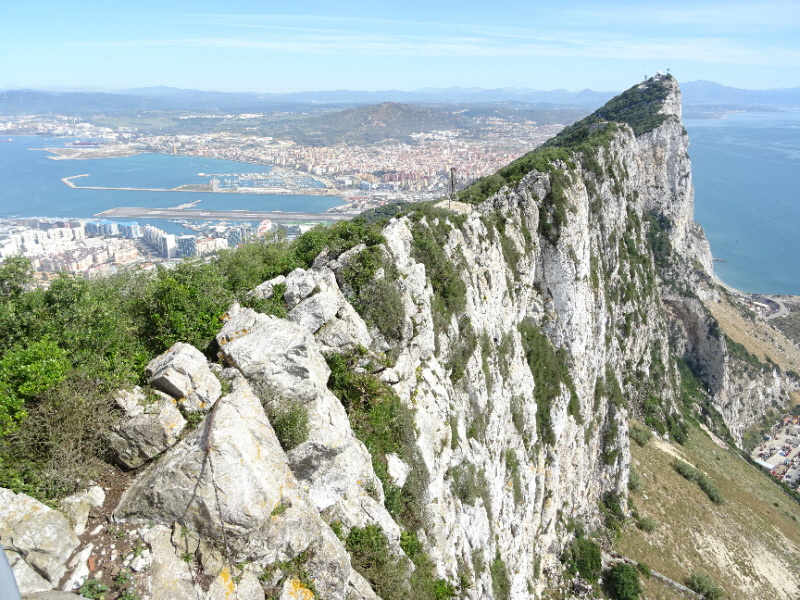 One of the numerous Barbary Macaque monkeys that live on the Rock of Gibraltar.   They are the only wild monkey population in the European continent. 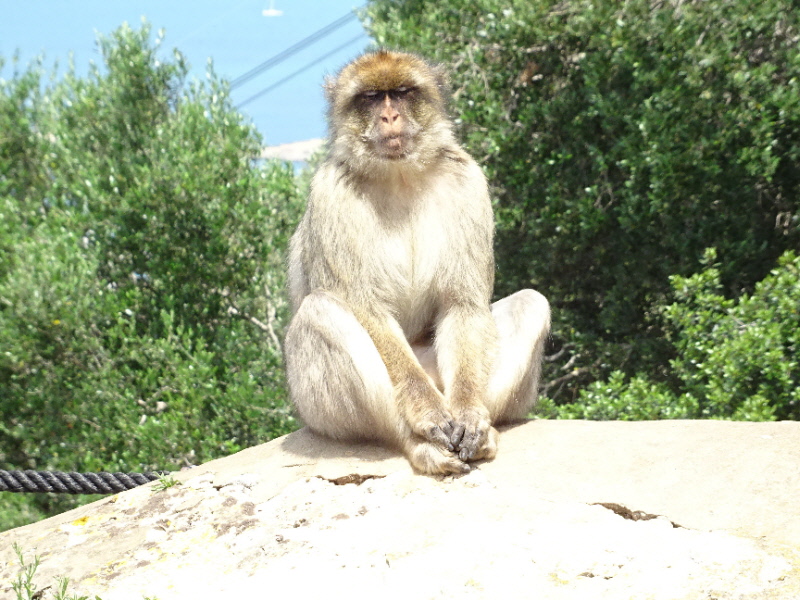 While visiting O’Hara’s  Battery, we were able to have a good view of the southern end of the Rock of Gibraltar.  O’Hara’s Battery was constructed in 1890 and it was still used in WWII. 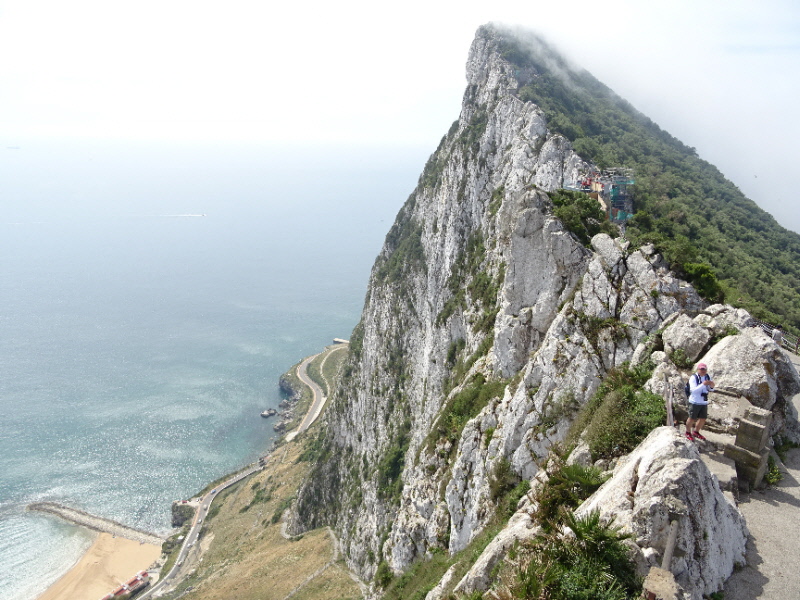 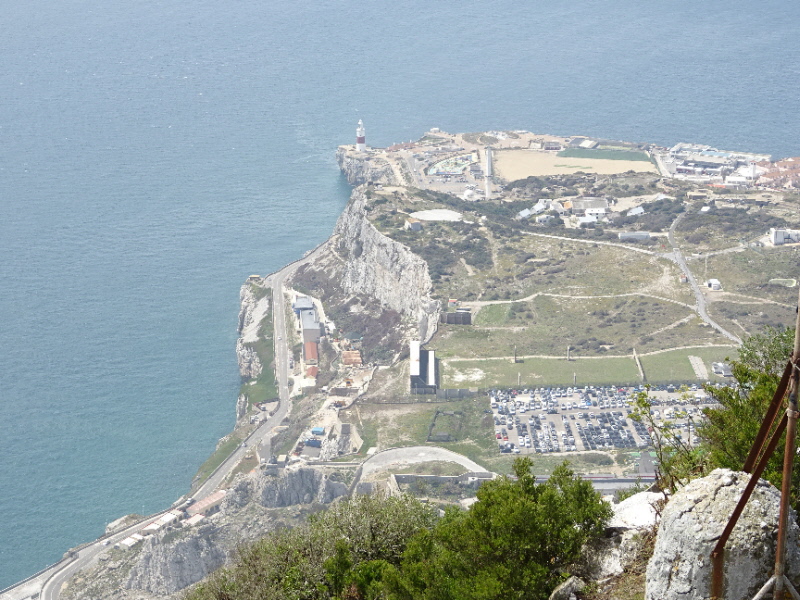 The Barbary Macaque monkeys are excellent pickpockets and thieves.   This Macaque stole someone’s K-Bab lunch.   He loved the flat bread and ate the all the contents except the grilled chicken.  Whenever he got a bite of chicken, he angrily threw it down on the ground. 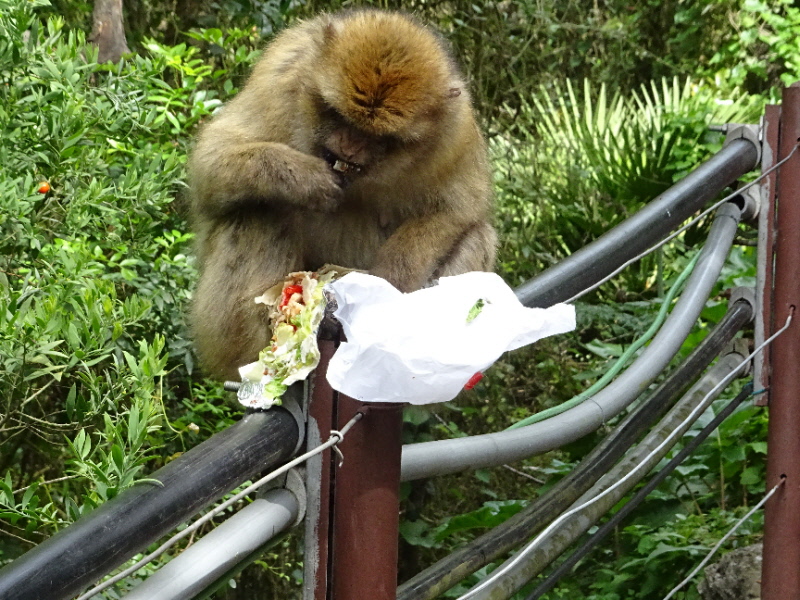 While walking down from the top of the Rock, we stopped to see St Michael Cave.    St Michael’s Cave has interested visitors to Gibraltar ever since the days of the Romans.   During the WWII the cave was prepared as an emergency hospital, but was never used.  The main hall of the cave is enormous and has actually been converted into an auditorium for performances with a capacity of about 400 people. 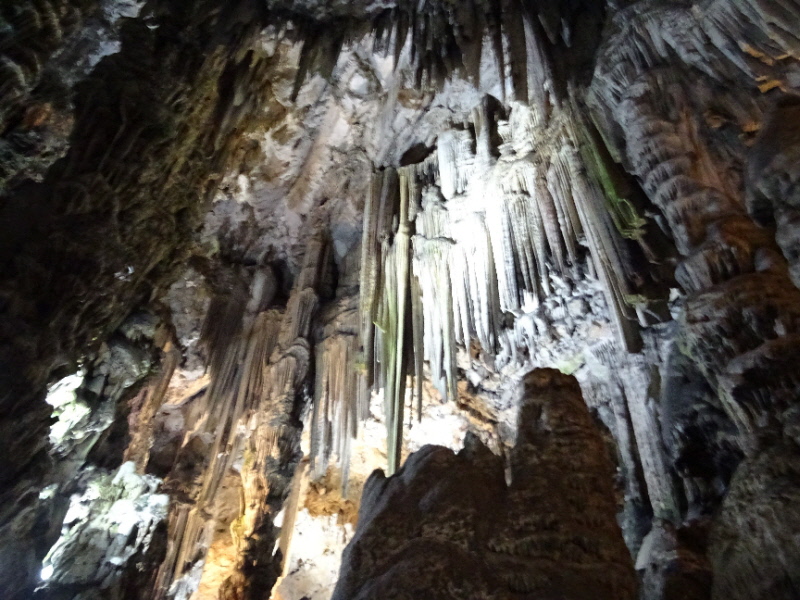 Curious, but wild Barbary Macaque monkeys were everywhere on the upper part of the Rock. 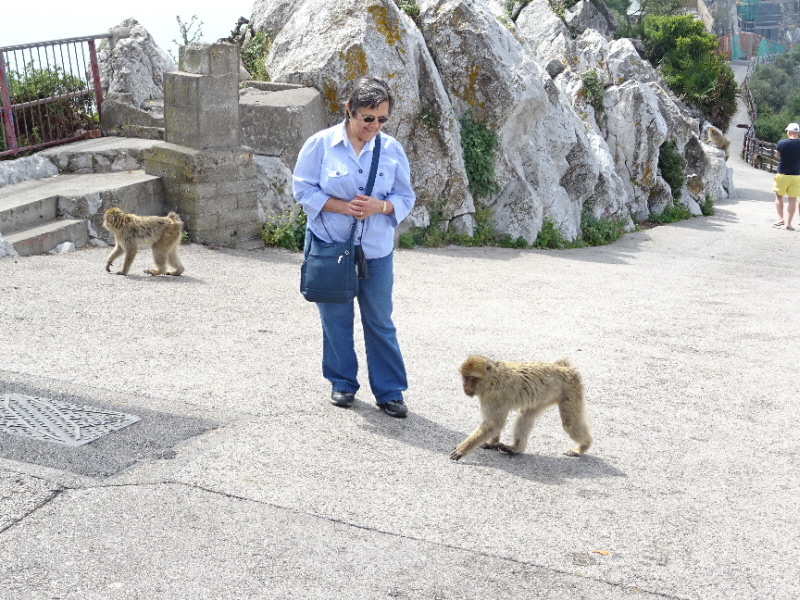 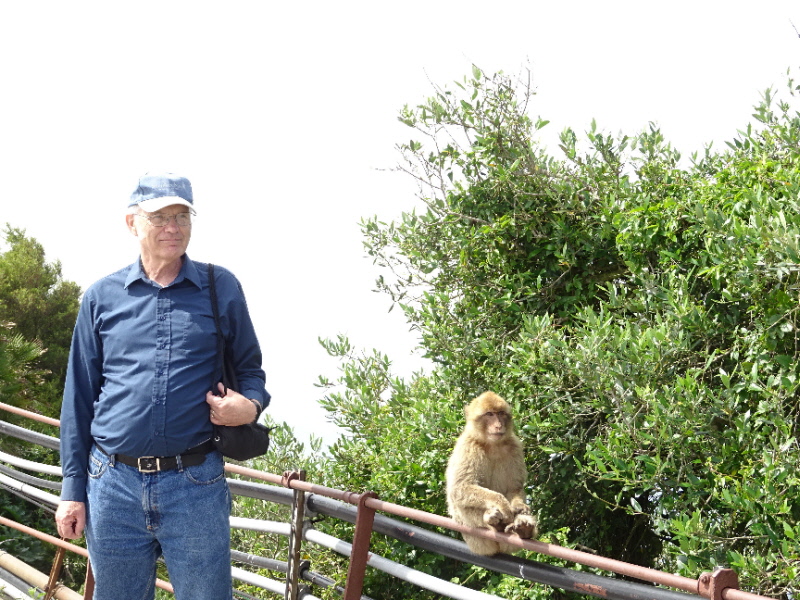 View of Spain from gun hole in the Great Siege Tunnel.   The Great Siege Tunnel was made during the war of American Independence, when France and Spain made an all-out attempt to recapture the Rock of Gibraltar from the British (always called The Great Siege, which lasted from July 1779 to February 1783).   Using only sledgehammers and crowbars, and aided by gunpowder for blasting, in five weeks 18 British men drove a tunnel 8 feet square by 82 feet long into the Rock.   Holes from the Tunnel allowed the British to fire guns from the face of the Rock.  By the end of the siege, the tunnel was 370 feet long. 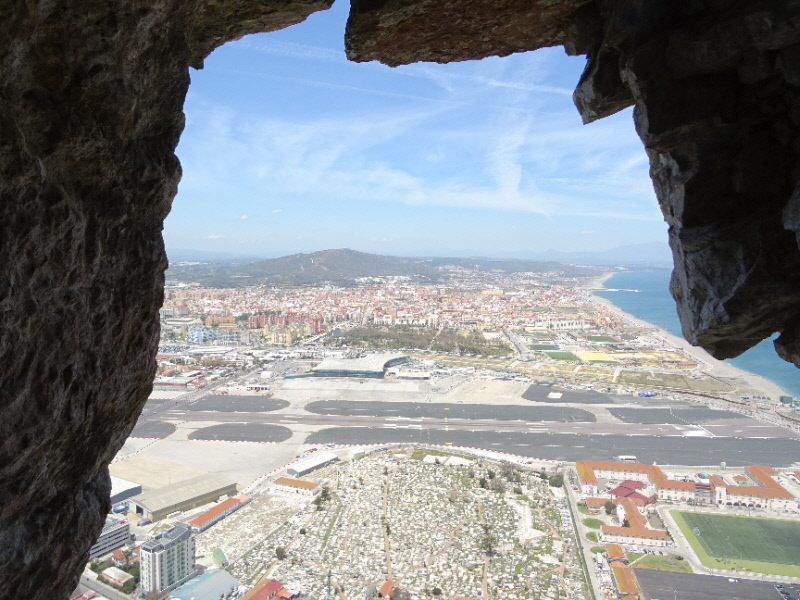 More Barbary Macaque monkeys.   They seemed to act like a married couple. 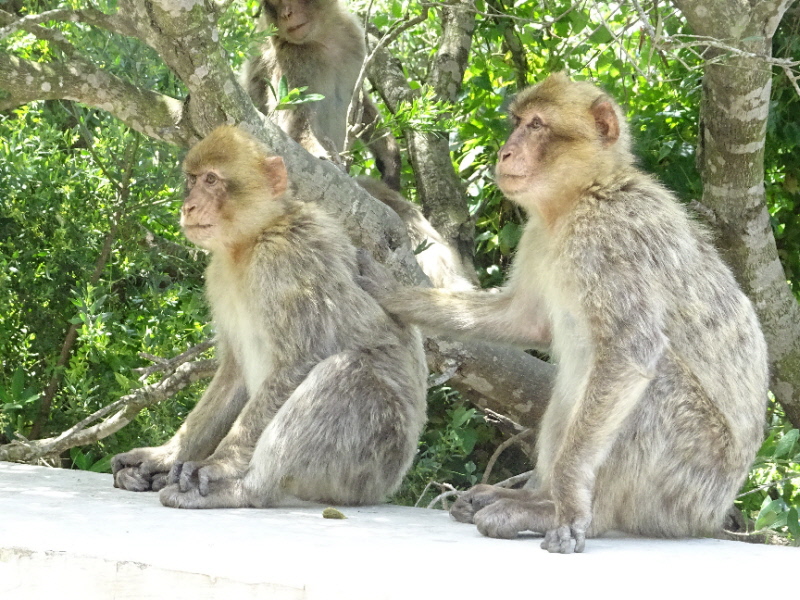 Flags of European Union, Gibraltar and UK flying over Princess Caroline’s Battery on the Rock of Gibraltar. 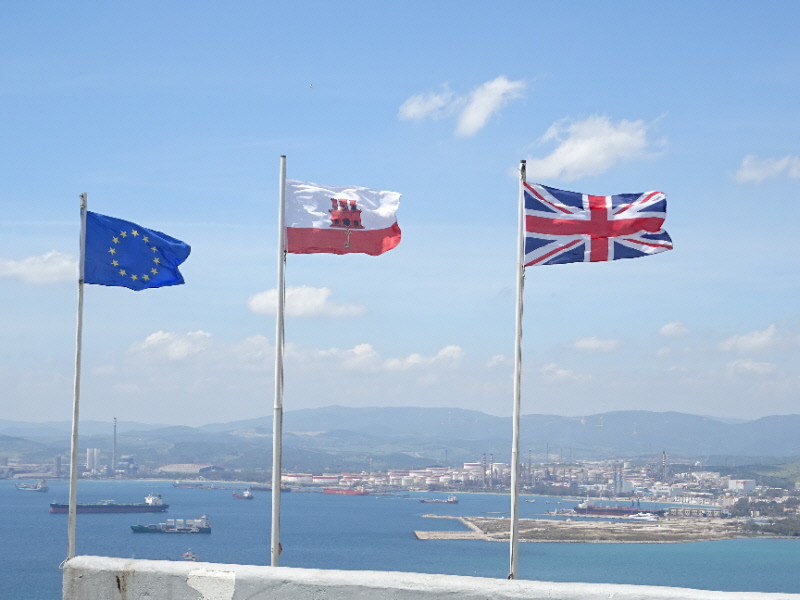 Another Barbary Macaque monkey sitting on the Charles V Wall overlooking the city of Gibraltar. 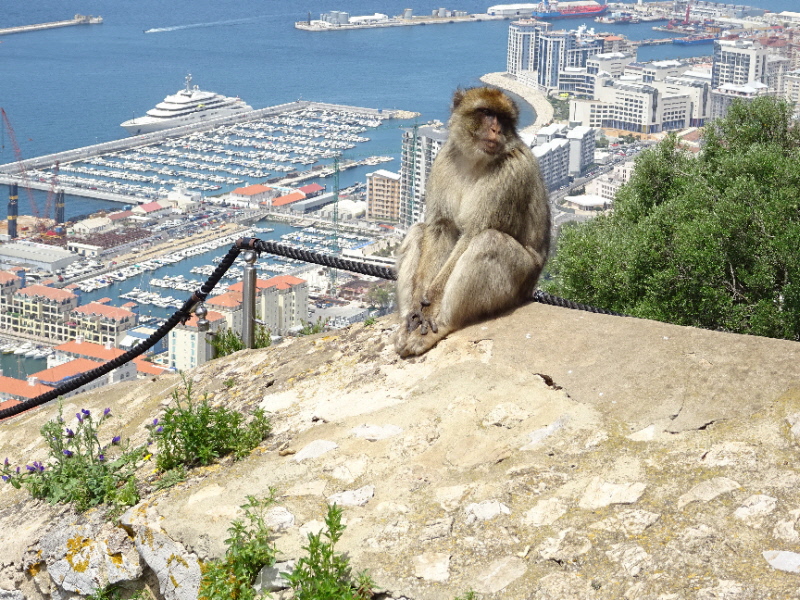 Our time in the Gibraltar WWII Tunnels was limited, since we arrived near closing time.  During WWI, British and Canadian personnel dug 33 miles of tunnels in the Rock.   The tunnels accommodated what amounted to an underground city.  The entire 16,000-strong garrison could be housed there along with enough food to last them for 16 months.  Within the tunnels there were also an underground telephone exchange, a power generating station, a water distillation plant, a hospital, a bakery, ammunition magazines and a vehicle maintenance workshop. 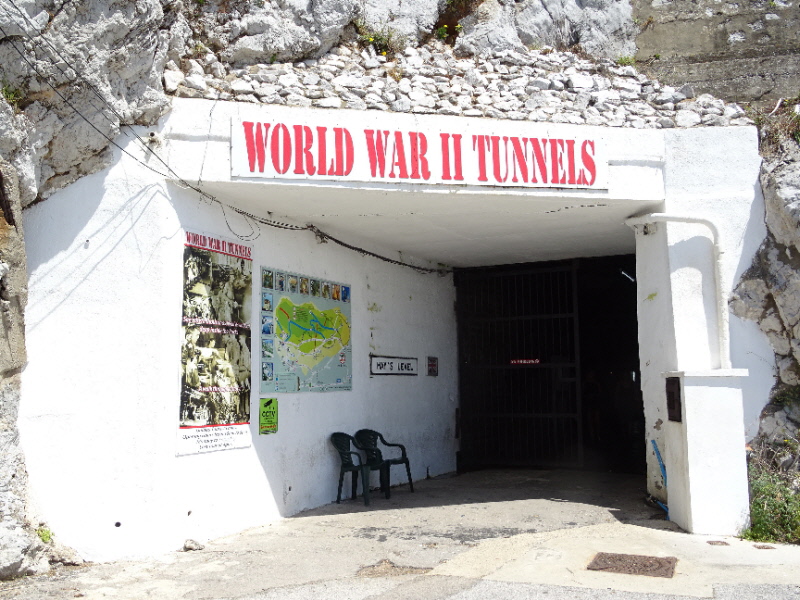 The last section of our trek down from the top of the Rock was known as Castle Steps in the upper old city.  It was a never-ending set of steps down to the center of the old city.   We lost count, but it was easily around 500 steps to the bottom. 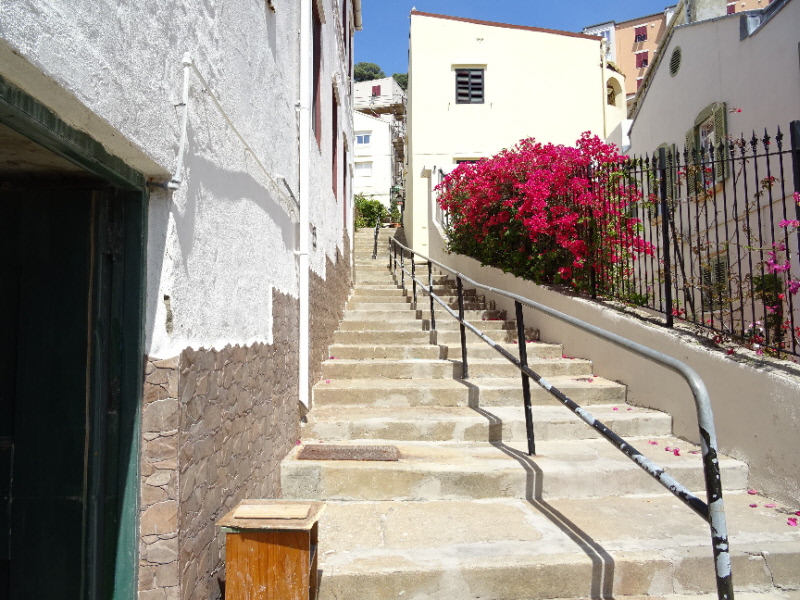