During our stay in Bucharest, we were taken on a tour of the city.

There were several old churches in the city, including Kretzulescu Church which was built in 1722.  In the early days of the communist regime, Kretzulescu Church was slated for demolition, but was ultimately saved.   It is located at one of the corners of Revolution Square, next to the former Royal Palace. 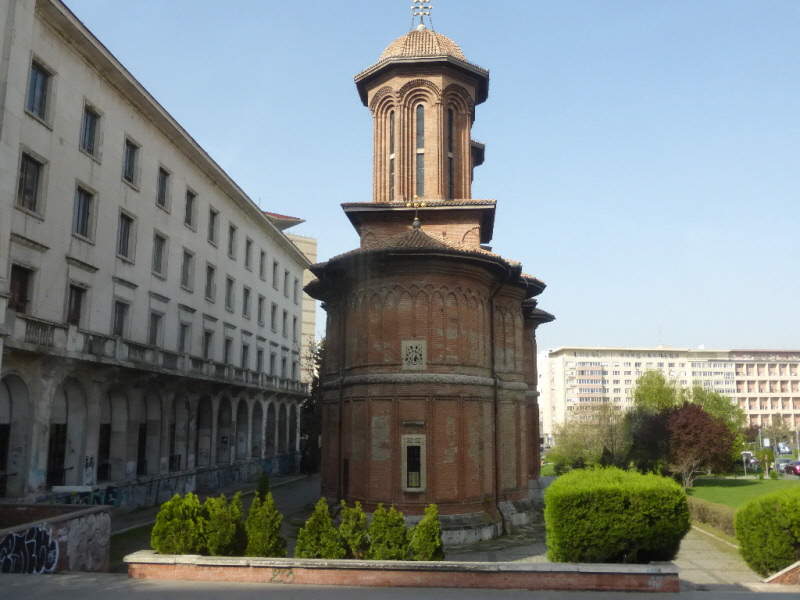 Stavropoleos Monastery, also known as Stavropoleos Church was an Eastern Orthodox monastery for nuns in central Bucharest, Romania.   It was built in 1724.  The name Stavropoleos is a Romanian rendition of a Greek word, Stauropolis, meaning "The city of the Cross".   One of the monastery's constant interests is Byzantine music, expressed through its choir and the largest collection of Byzantine music books in Romania. 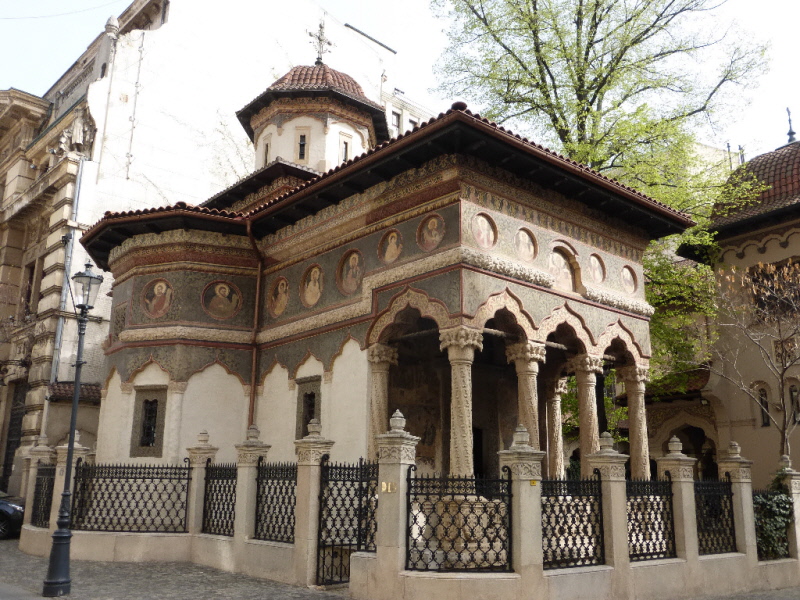 There is a statue of King Carol I is in front of University of Bucharest Library in Revolution Square.   After the defeat of the Ottoman Empire Carol I became the first king of Romania. 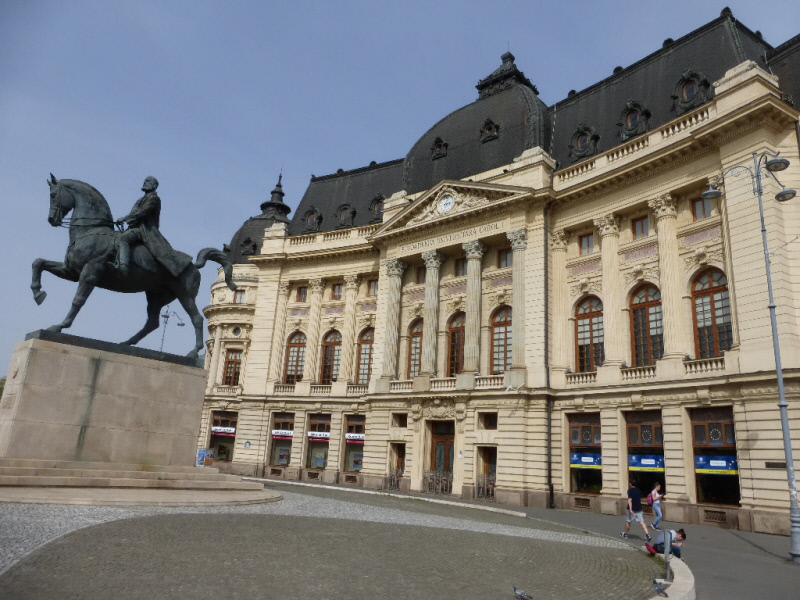 Next to Revolution Square is the former headquarters of the Communist secret police.   The interior of the building was gutted and a new glass building was built inside the former building. 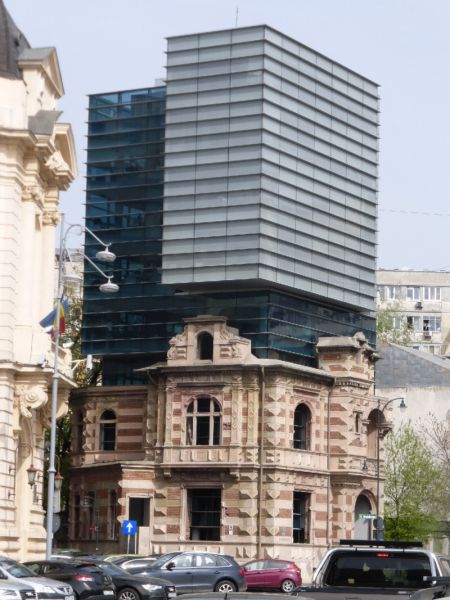 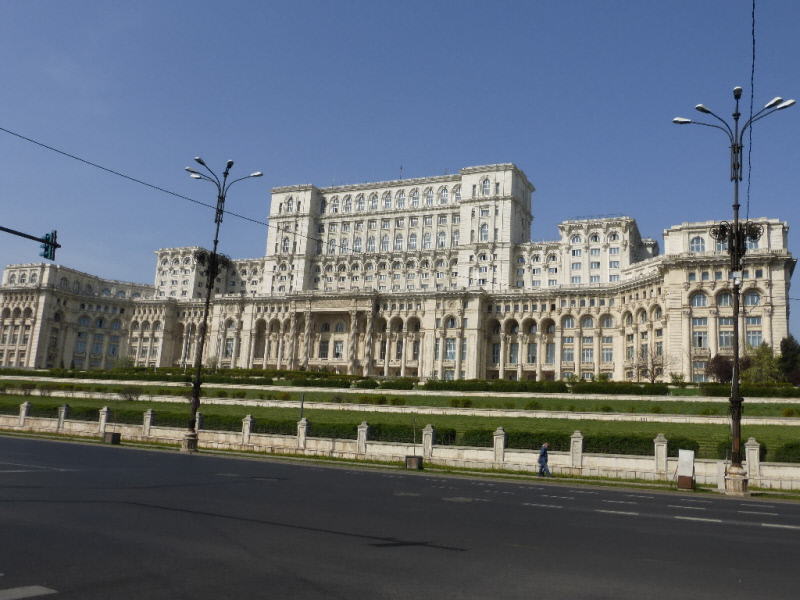 Sadly although it houses the Senate and the Chamber of Deputies, three museums and an international conference center, about 70% of the building is empty.   It is a testament to the ego of the former dictator Nicolae Ceaușescu.   Over 40,000 people were relocated and many churches, a monastery, a hospital and 37 factories were leveled. 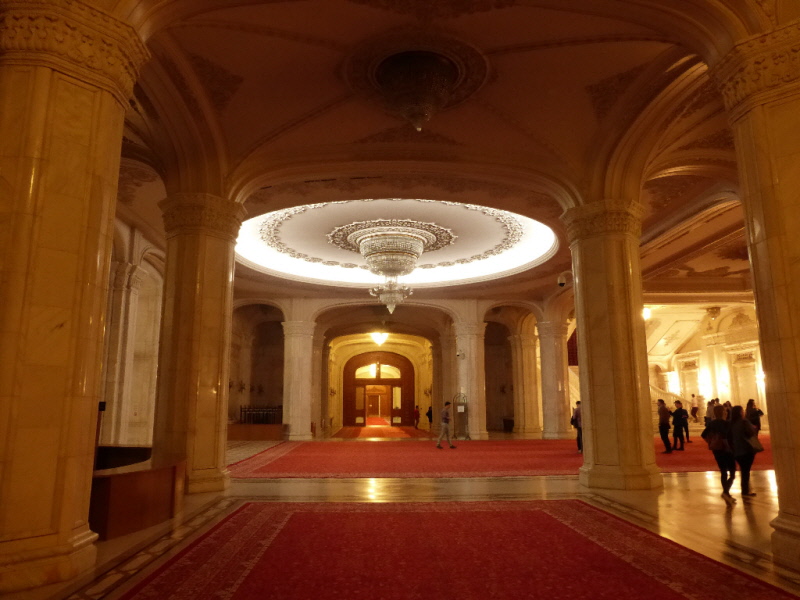 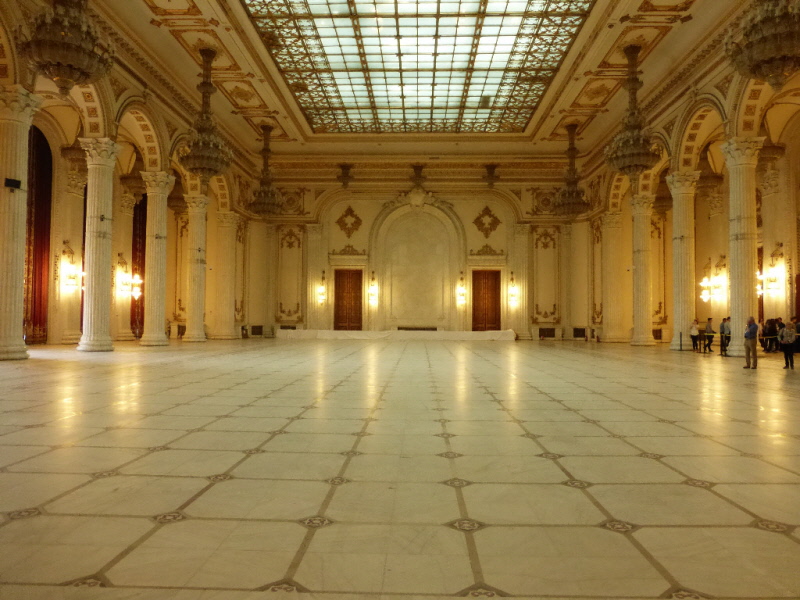 Some of the meeting rooms were built with booths for translators. 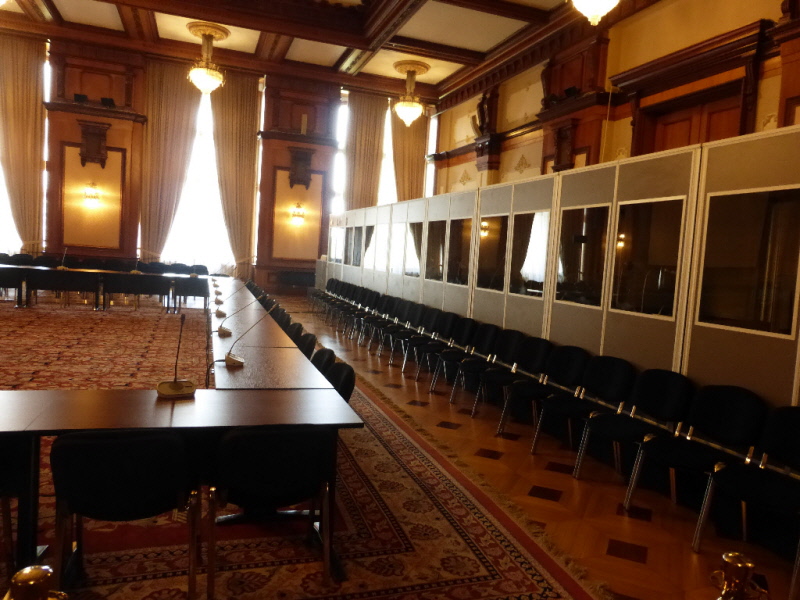 The Palace of the Parliament even includes a beautiful theater. 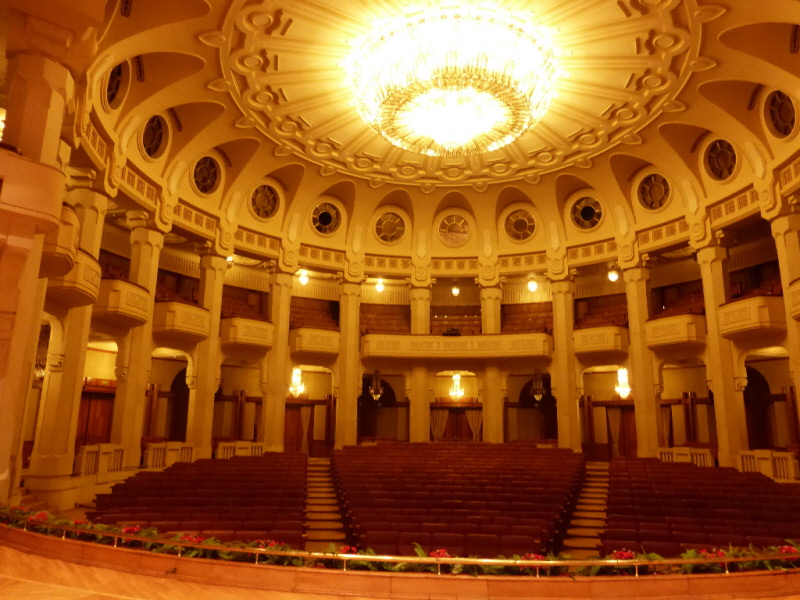 Here is a view of Bucharest from an upstairs balcony in the Palace of the Parliament building. 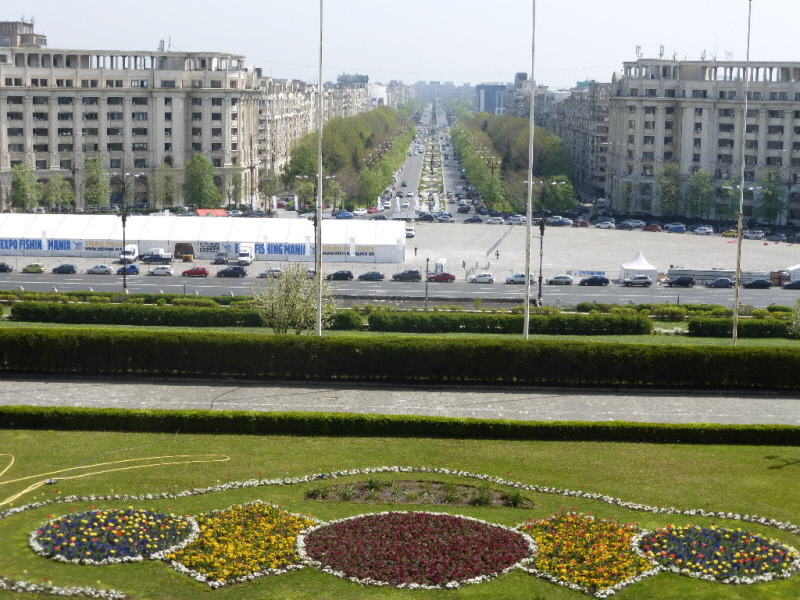 We had lunch at Caru cu Bere (beer hall and restaurant) which was opened as a beer house in 1899.  The vaulted ground floor is richly decorated with paints, stained glass, mosaics and carved panelings and the interior resembles a beautiful church. 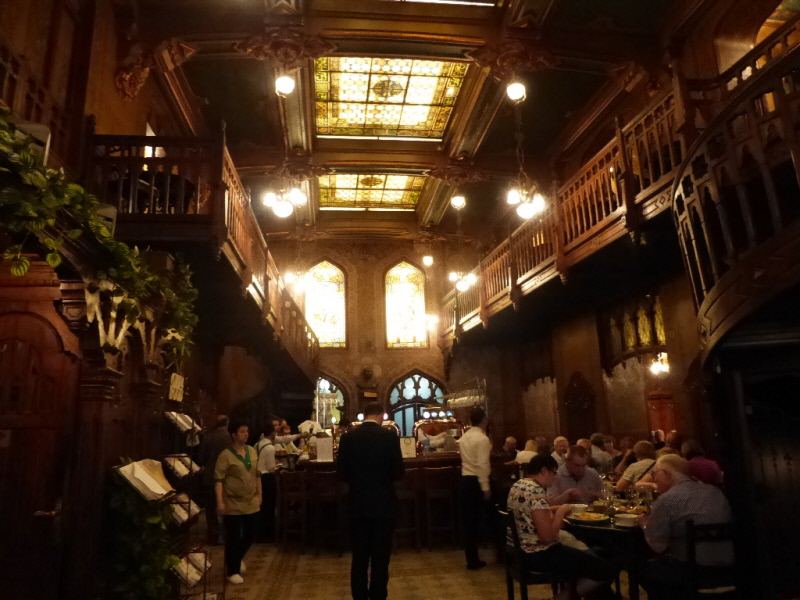 We took a bus ride to Giurglu where we met the cruise ship and enjoyed our first meal on board the ship. 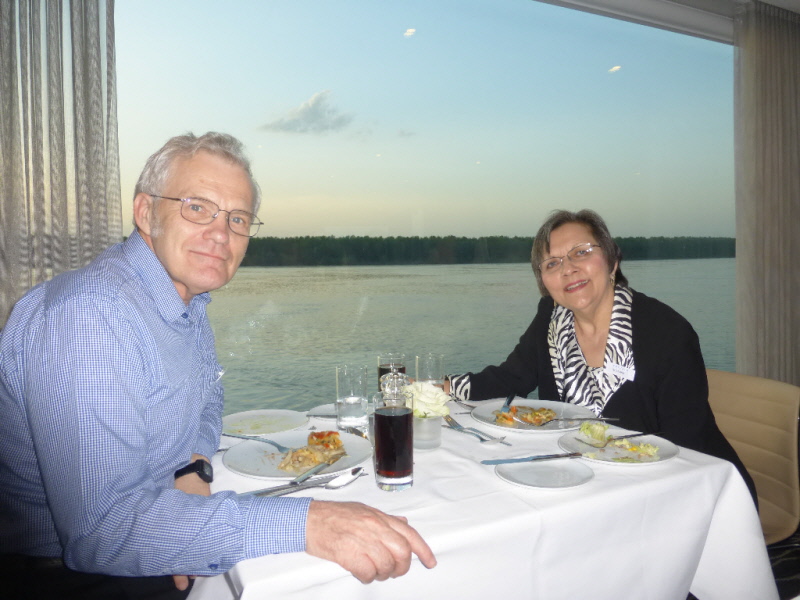 To see our pictures of Bulgaria, please click here.

To see our pictures of Serbia, please click here.

To see our pictures of Croatia, please click here.

To see our pictures of Hungary, please click here.