Our journey through Jerusalem - Part 1

Excavations in 2005 revealed the remains of a large building, which was determined to be built in the early 10th century during the reign of David.   Jewish scholars believe that this is part of King David’s Palace (2 Sam 5:11). 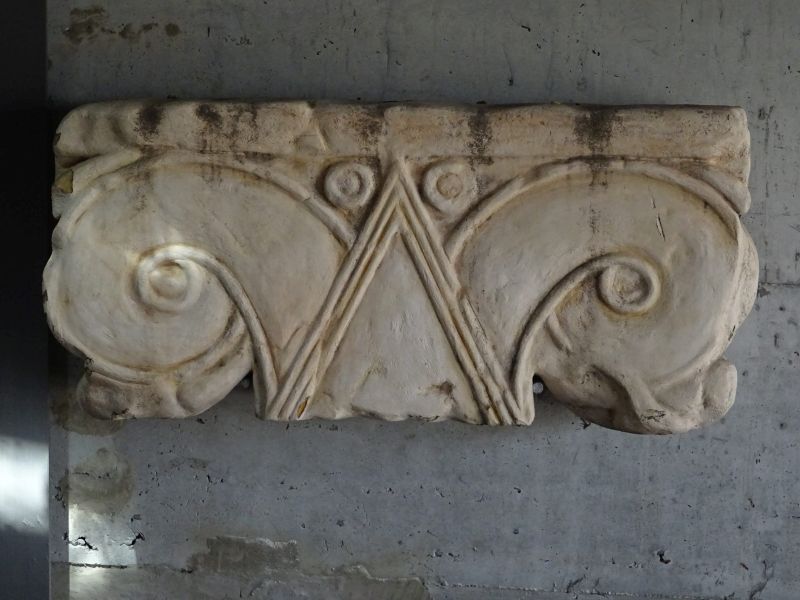 Nearby are the remains of one of the towers built by Nehemiah during the rebuilding of the walls of Jerusalem (Nehemiah 2-7). 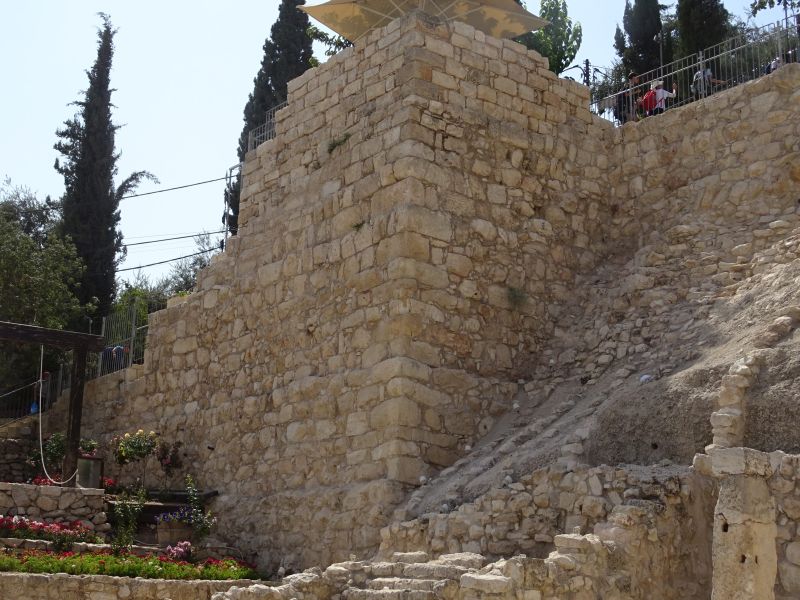 We walked along the remains of old main street that ran alongside western wall.   This street existed in when Jesus visited Jerusalem, so it is very likely that Jesus walked on this very road. 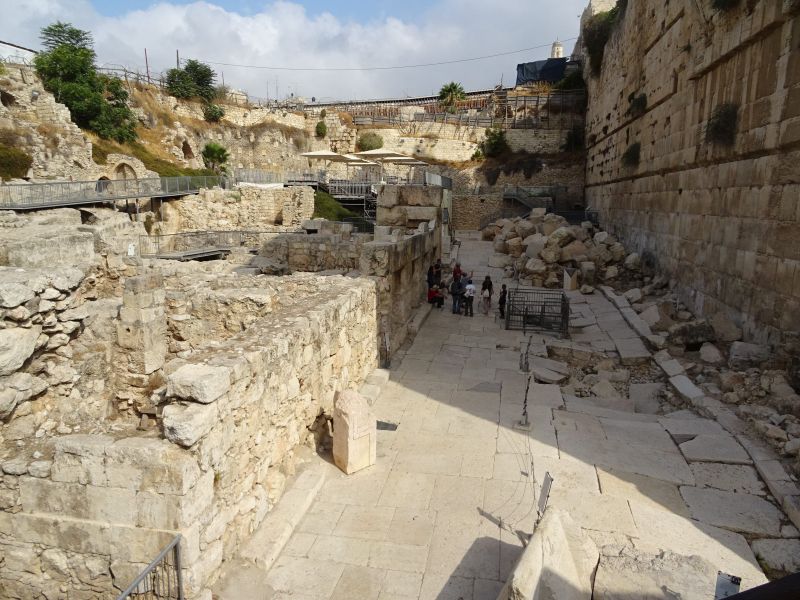 The Western Cardo is the remnants of the main street which crossed Jerusalem during the Roman- Byzantine era.   The columns supported a wooden (no longer preserved) roof that covered the shopping area and protected the patrons from the sun and rain.  Today the Byzantine street is about 20 feet below the present street level, indicating the level of accumulation in the last 1500 years. 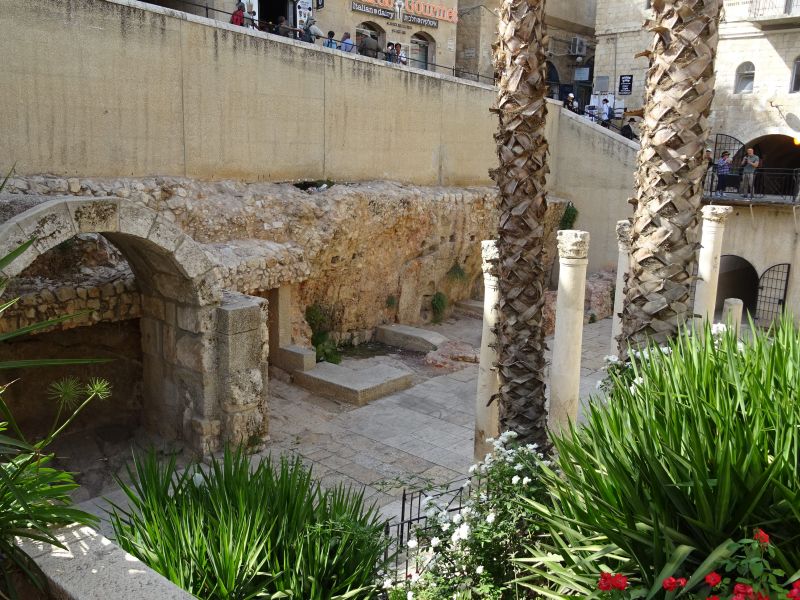 The Siloam Tunnel, also known as Hezekiah's Tunnel, is a water tunnel that was carved underneath Jerusalem.  King Hezekiah prepared Jerusalem for an impending siege by the Assyrians, by "blocking the source of the waters of the upper Gihon spring, and leading them straight down on the west to the City of David" (2 Chronicles 32). The tunnel leads from the Gihon Spring to the Pool of Siloam.  The curving tunnel is 1750 feet long, and has only a 12 inches altitude difference between its two ends. 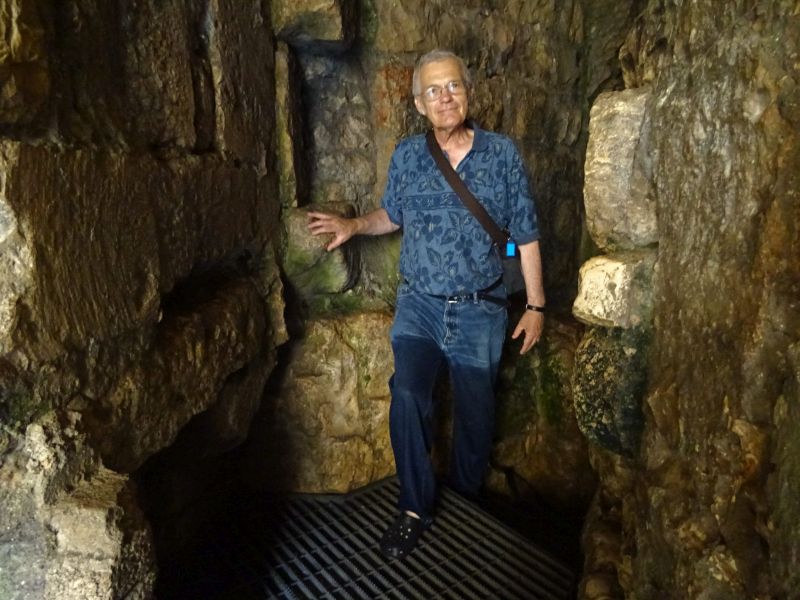 According to the Siloam inscription, the tunnel was excavated by two teams, one starting at each end of the tunnel and then meeting in the middle.  How the Israelite engineers dealt with the difficult feat of making two teams digging from opposite ends meet far underground is still not fully understood, but some suggest that the two teams were directed from above by sound signals generated by hammering on the solid rock through which the tunnelers were digging. 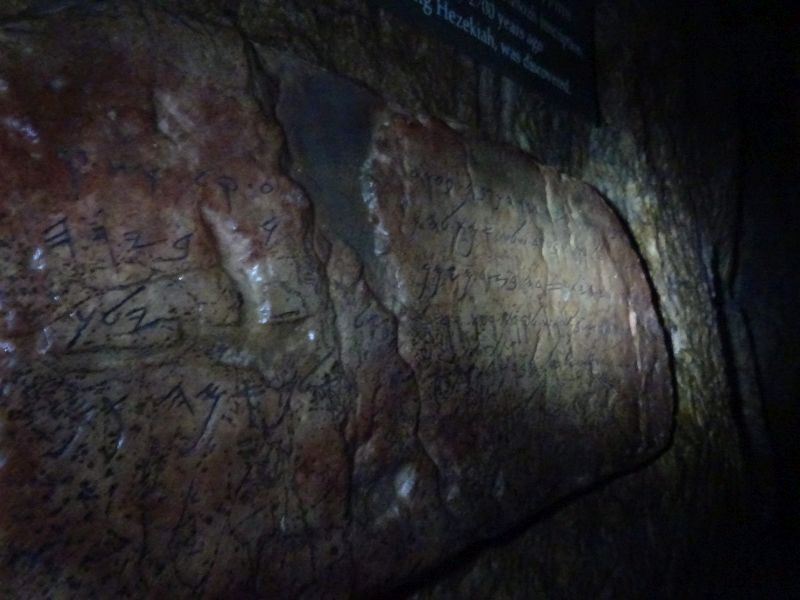 Near the Pool of Siloam is an excavated old Roman street.  It existed in the time of Jesus and Jesus could very well have walked down this very street. 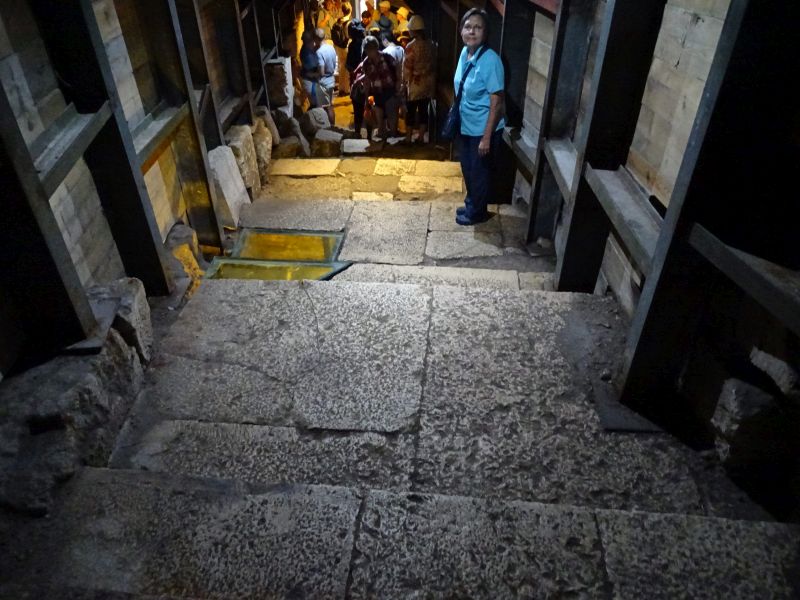 The Pool of Bethesda is currently being excavated.  It was here that Jesus healed the lame man on the Sabbath (John 5:1-16). 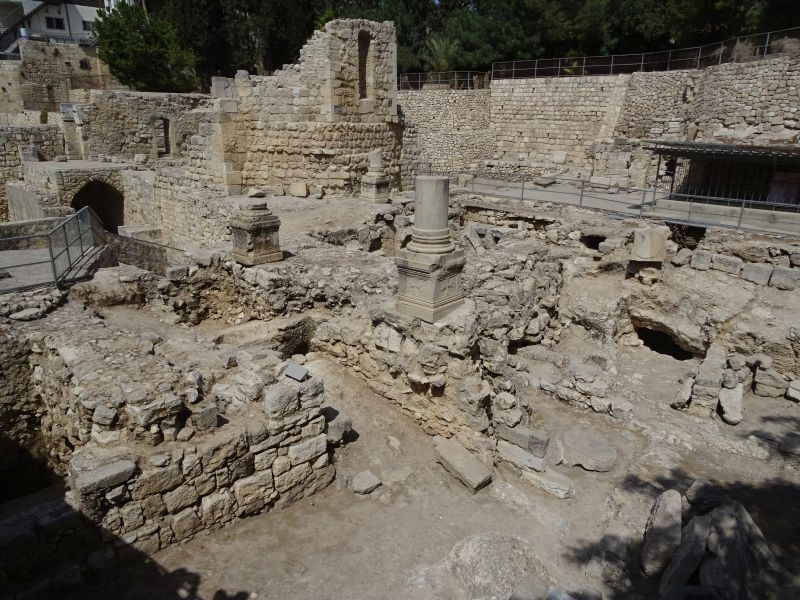 In 19 BC, King Herod undertook a project to double the area of the Temple Mount in Jerusalem by incorporating part of the hill on the Northwest.  In order to do so, four retaining walls were constructed, and the Temple Mount was expanded on top of them. These retaining walls remained standing, along with the platform itself, after the Temple was destroyed by the Romans in 70 AD.  Since then much of the area next to the walls became covered and built upon.  Part of the Western Wall remained exposed after the destruction of the Temple.   Since it was the closest area to the Temple’s Holy of Holies that remained accessible, it became a place of Jewish prayer for millennia. 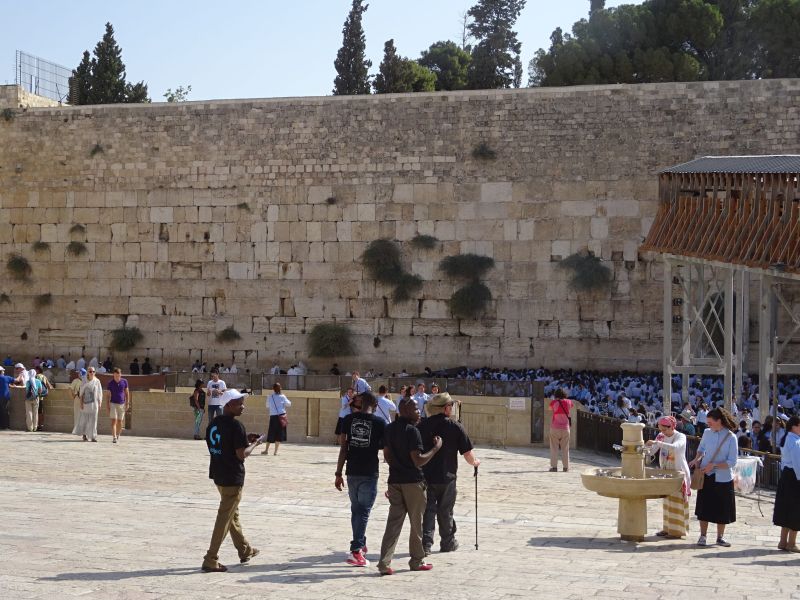 The Western Wall Bar Mitzvah celebrations regularly occur, especially on Mondays.  It starts with a parade down the ancient streets of the old city ending at the Western Wall.  A Torah is pulled out and a brief service is conducted culminating with the 13-year-old boy praising Hashem for the gift of the Torah and basically promising to uphold its commandments.  Although women are separated by a walled barrier, the female members of the family can watch by standing on chairs. 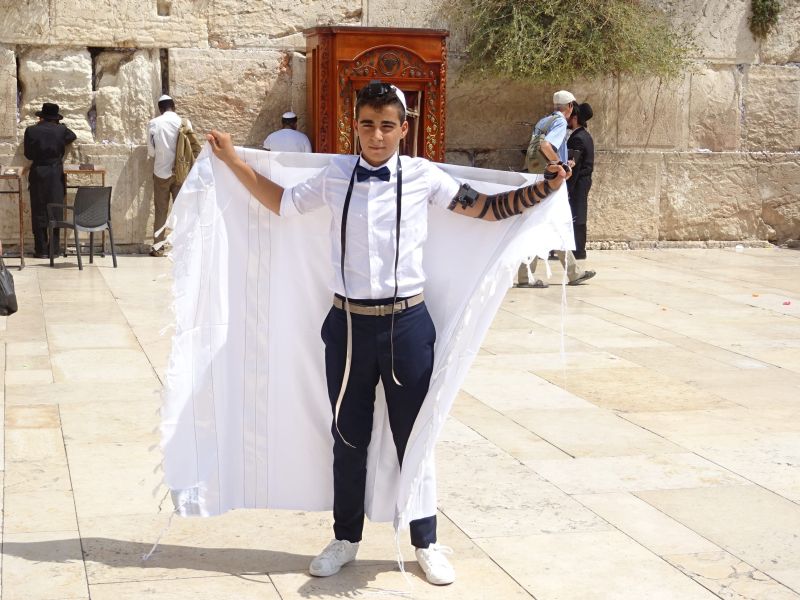 The Western Wall Tunnel is an underground tunnel exposing the full length of the Western Wall. The tunnel goes 1,591 ft under the Western Wall and buildings of the Old City of Jerusalem. We viewed the biggest stone in the Western Wall, often called the Western Stone, which ranks as one of the heaviest objects ever lifted by human beings without powered machinery.  The stone has a length of 45 ft, height of 9.8 ft, and an estimated width of about 13 ft; estimates place its weight at 570 tons. 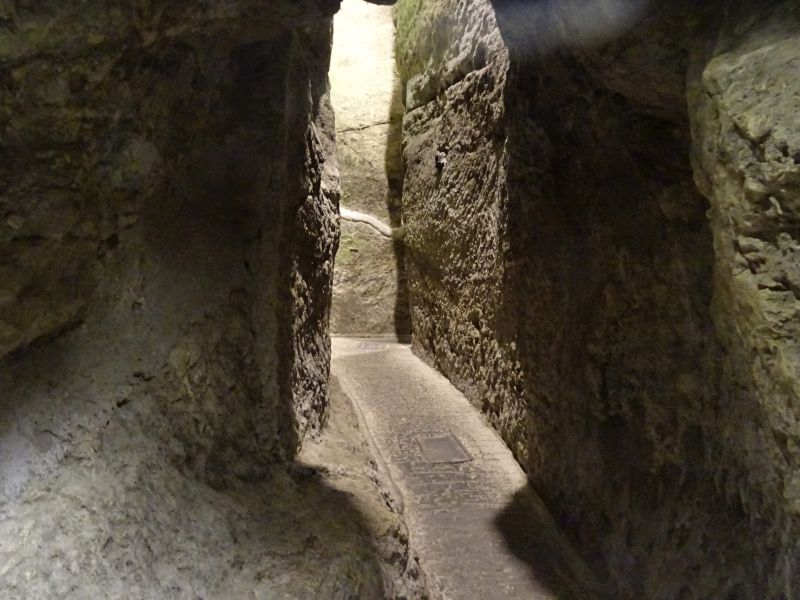 Here is Suzanna standing with Hebrew women praying in the tunnel at the closest physical point to the Holy of Holies. 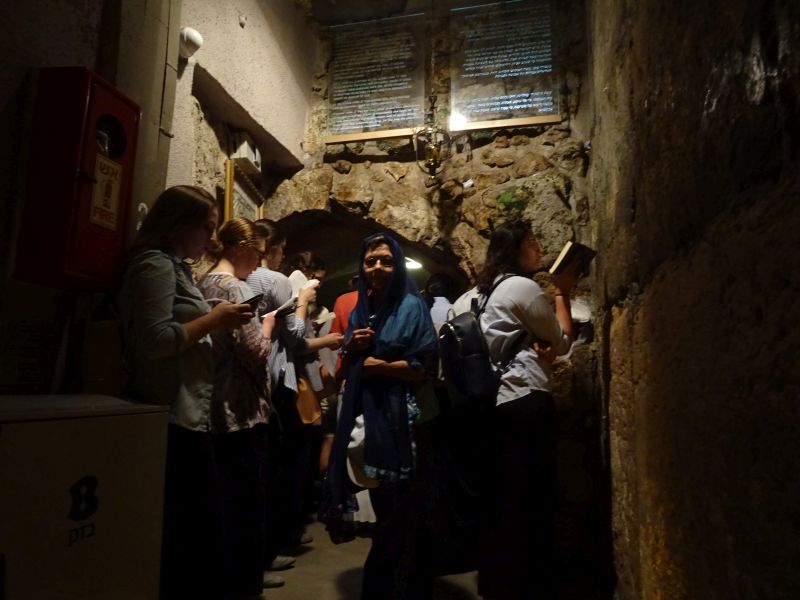