Our journey through Jerusalem - Part 2

Saint Mark's Syrian Orthodox Monastery is a Syriac Orthodox monastery and church in Jerusalem. According to a 6th-century inscription found during a restoration in 1940, the church is on the ancient site of the house of Mary, mother of St. Mark the Evangelist (Acts 12:12) and the place of the Last Supper of Christ with His disciples. The inscription reads "This is the house of Mary, mother of John, called Mark. Proclaimed a church by the holy apostles under the name of the Virgin Mary, mother of God, after the ascension of our Lord Jesus Christ into heaven. Renewed after the destruction of Jerusalem by Titus in the year A.D. 73." 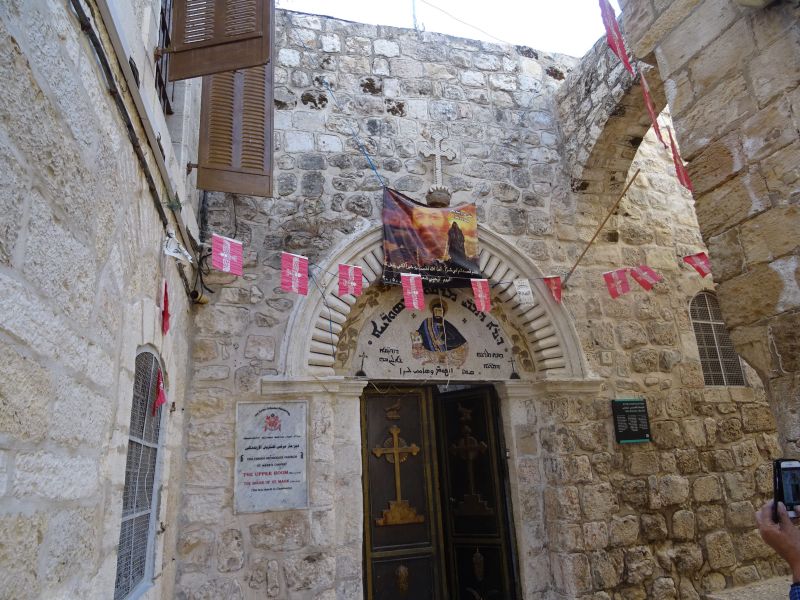 The Church of St Mark is home to one of Jerusalem’s smallest and oldest Christian communities, but it is the setting for a remarkable set of traditions — including the claim to be the site of the Upper Room of the Last Supper (Mark 14:12-25).   A notice beside the door proclaims the Church of St Mark to be “The first church in Christianity”, in the belief that it is on the site of the original house-church of Jerusalem’s early Christians (Acts 12:12-17). 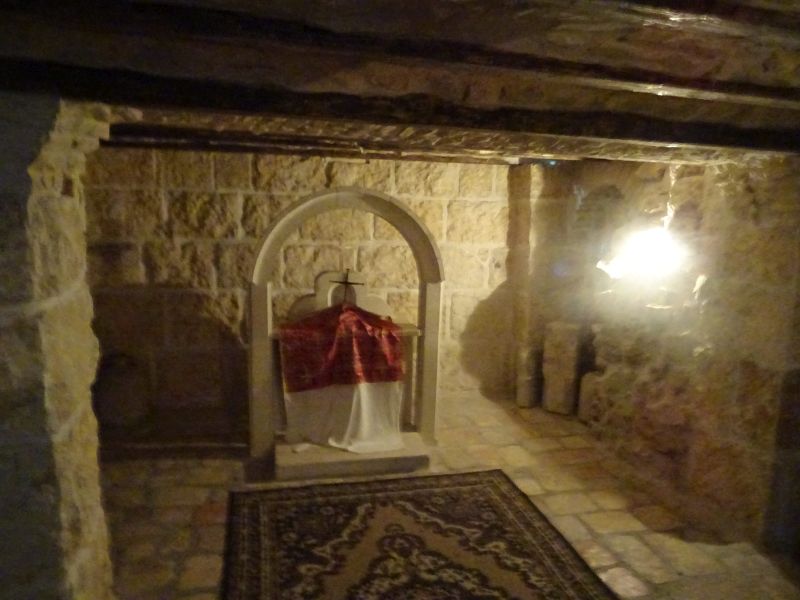 Church of St Peter in Gallicantu

The church takes its name from the Latin word "Gallicantu", meaning cock's-crow.  This is in commemoration of Peter's triple rejection of Jesus "... before the cock crows twice." (Mark 14:30).  The church is also believed to be at the location of the High Priest Caiaphas' palace. 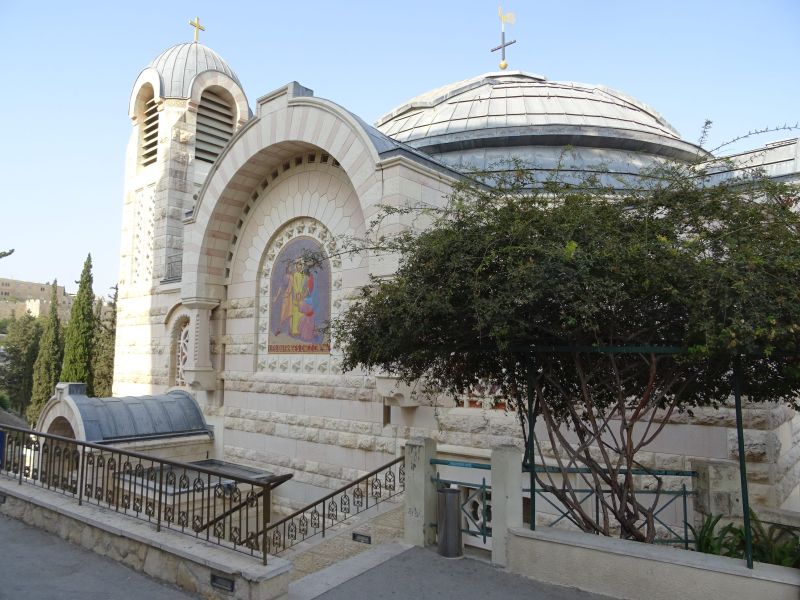 The Garden Tomb is a rock-cut tomb in Jerusalem which was unearthed in 1867 and is considered by many Protestant Christians to be the site of the burial and resurrection of Jesus.  The Garden Tomb is adjacent to a rocky escarpment which has been proposed by some scholars to be Golgotha.   The Garden Tomb and its surrounding gardens have been maintained as a place of Christian worship and reflection. 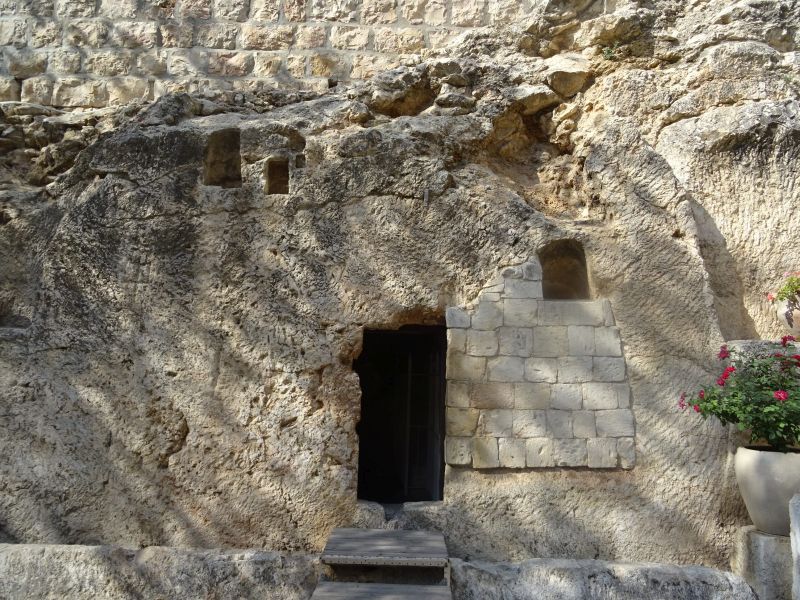 However, Roman Catholics hold to the belief that the traditional site where the death and resurrection of Christ occurred has been the Church of the Holy Sepulcher. 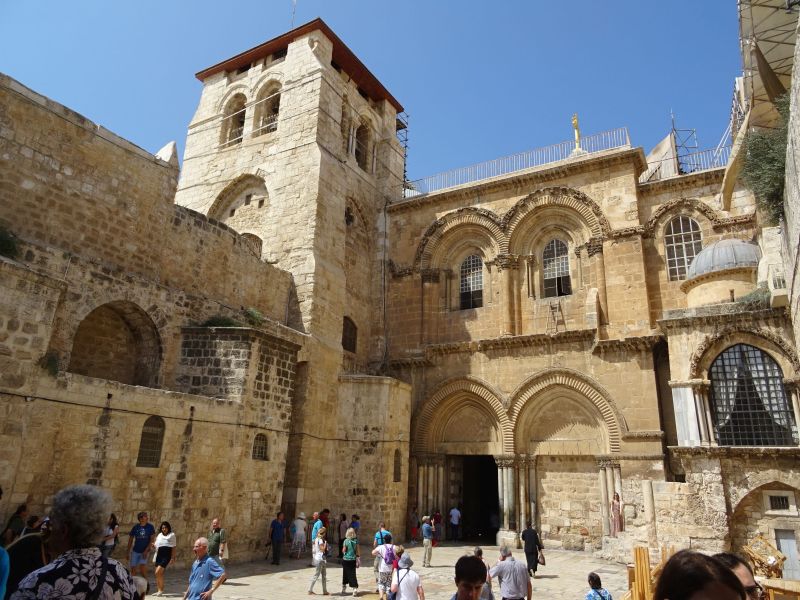 The Jerusalem Prayer Center is located in a large home that was built in 1890, during the time of the Ottoman-Turkish Empire. Its history is connected with the family of Horatio Spafford, who wrote the words to the song, “It is Well with my Soul”.   It has an Interactive Prayer Room for Christian believers to lift prayers of worship, confession, and intercession to God. 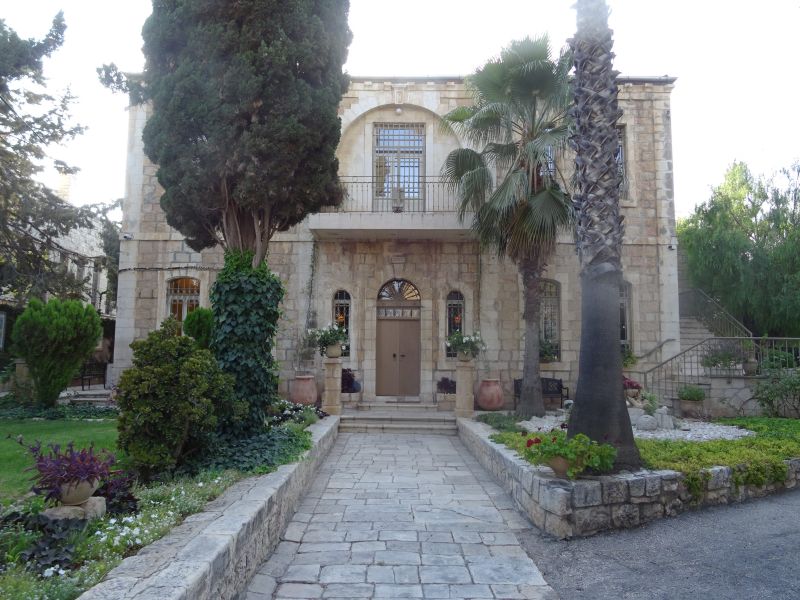 Suzanna playing “It is Well with my Soul” on a piano owned by Horatio Spafford. 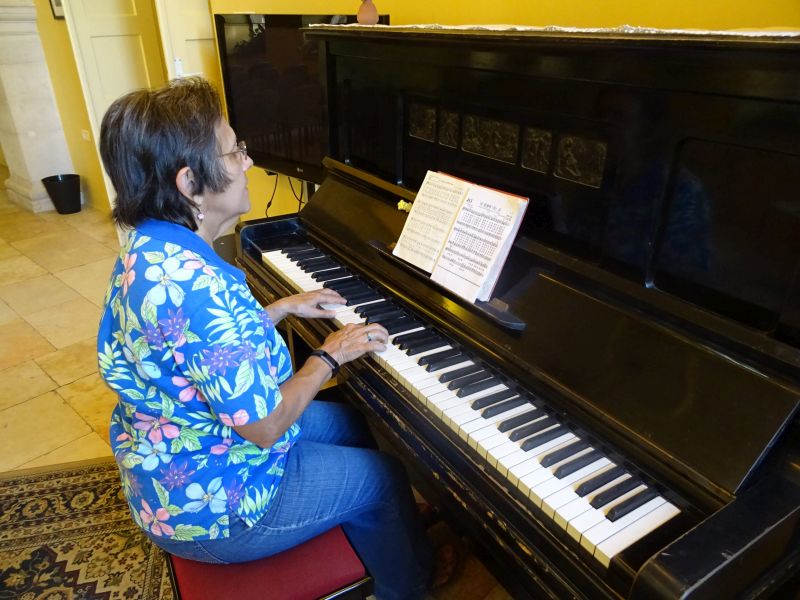 Yad Vashem (Holocaust Museum) is Israel's official memorial to the victims of the Holocaust.  It is dedicated to preserving the memory of Jews who fought against their Nazi oppressors and Gentiles who selflessly aided Jews in need with the aim of avoiding such events in the future. 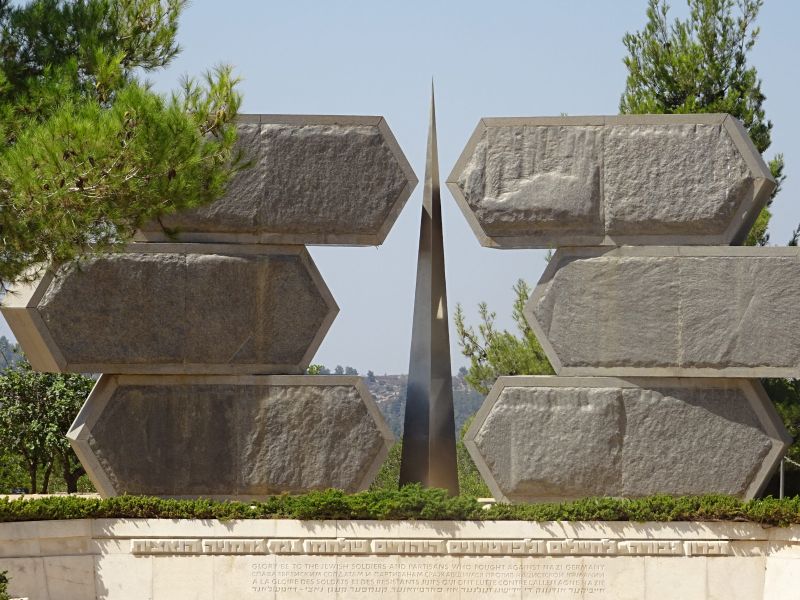 The Shrine of the Book is a wing of the Israel Museum and houses the Dead Sea Scrolls.   The shrine is built as a white dome, covering a structure placed two-thirds below the ground, that is reflected in a pool of water that surrounds it.  The shrine houses also the Isaiah scroll (dating from 2nd century BC) and the Aleppo Codex (oldest existing Hebrew Bible). 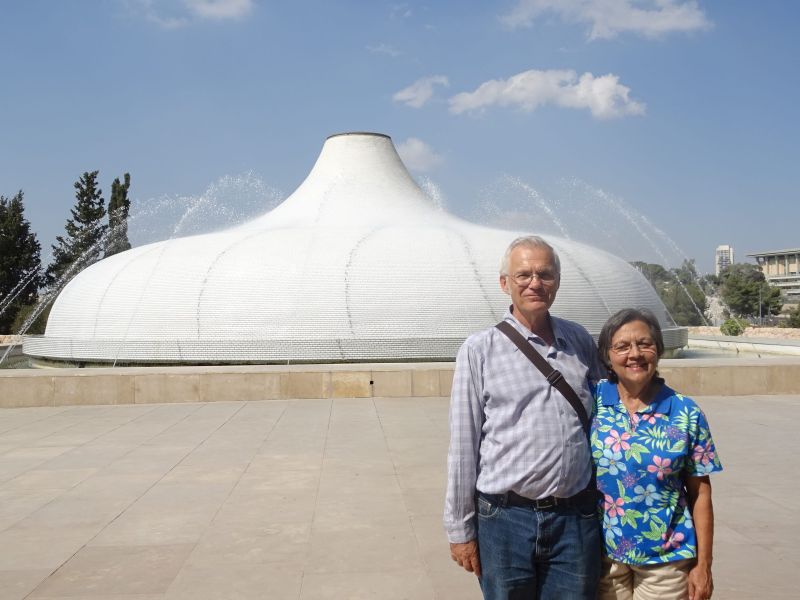 East Jerusalem Baptist Church is a small International and interdenominational church in East Jerusalem where we attended Sunday services. 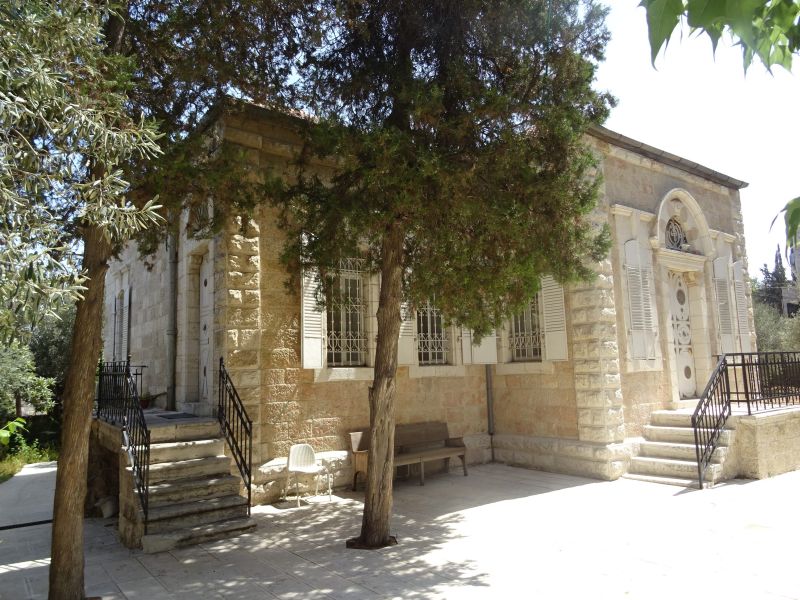 Vegetable and fruit vendors are setting up their stands in the Jerusalem Old City just inside the Samaria Gate. 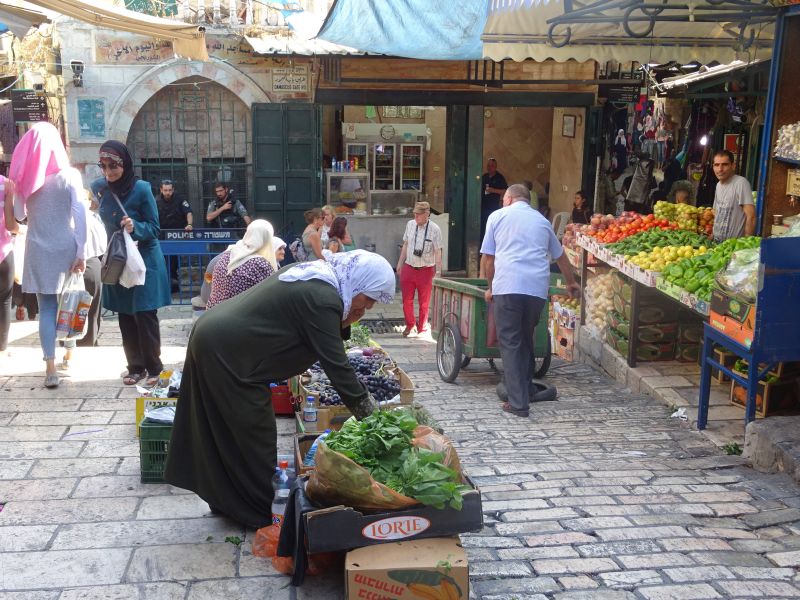 Grocery stores in the Old City are a bit different.  Spices and herbs are set out in open bins. 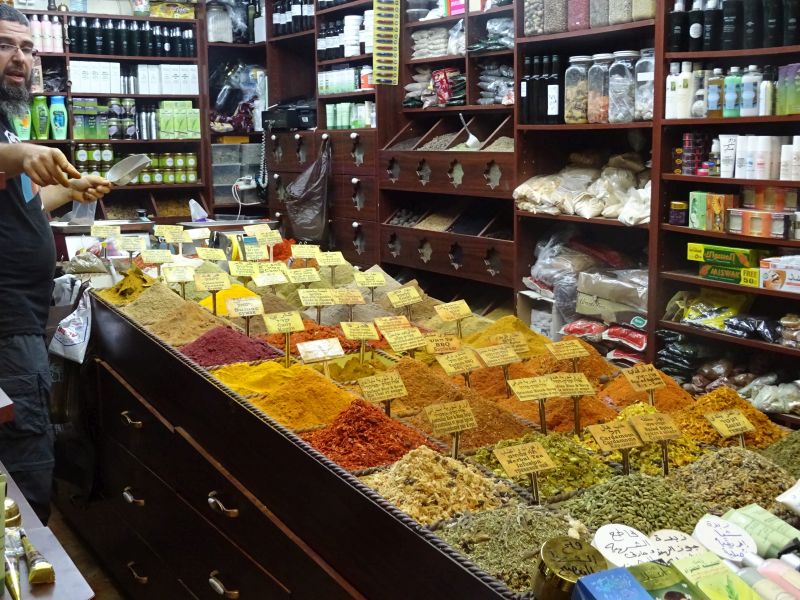 The streets in the Muslim Quarter of the Old City are narrow, crowded and very busy. 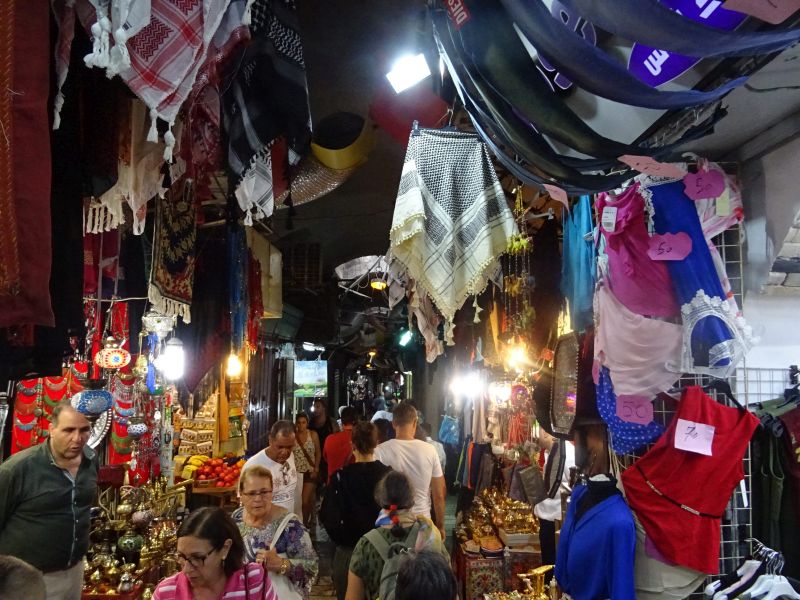